Become an Organ Donor, Save a Life

Conversations about death are rarely pleasant, but if you want to be an organ donor then it is a necessary conversation to have with family, rather than leave them with such an important and difficult decision during their time of grief and loss.

One simple way to make your desires clear is to sign the donor card at the Department of Motor Vehicles, or sign up online at www.donatelifedc.org/register/, www.mva.maryland.gov/programs/organ-donors/ or www.dmv.state.va.us/drivers/#organs.asp and have an organ donor notification made on your driver’s license. But many people hesitate to do this because of some common misconceptions.

Dr. Zakiyah Kadry, director of the Penn State Hershey Transplant Program, believes one reason for this fear may be television shows depicting the same doctor caring for a patient, declaring the patient a donor, harvesting the organs and doing the transplant.

That fictional depiction is far from reality.

“Transplant surgeons are very far down the line, we’re not at the beginning,” Kadry said. “The process involves multiple, separate teams, not just one person. As a transplant surgeon, I’m not involved in making the decision whether a person becomes an organ donor because I would have a conflict of interest.”

People may worry that if their driver’s license says “organ donor” that doctors may not do what is necessary to take care of them in a crisis.

“There’s always that doubt that ‘it’s easier to make me an organ donor than it is to take care of me,’” she said.

But physicians swear an oath to do no harm and do everything they can to care for patients. A person is only considered for organ donation after doctors have exhausted every potential lifesaving option to treat them, resulting in a final determination of death.

Others believe that they may be too old, but according to Kadry, even an 80-year-old liver could work fine as long as the donor doesn’t have any other conditions and is otherwise healthy. She encourages anyone faced with this kind of decision to consider how dire a situation the recipient is experiencing. For example, patients high on the waiting list for a liver transplant are at high risk of death. Those awaiting a heart transplant often spend much of their time on the list in the hospital due to the severity of their need.

Another myth is that the wealthy or famous receive organs first, but the allocation of organs is not based on income or status.

“You can’t buy organs, you don’t get preferential treatment, you get treated exactly the same as everybody else,” she said. “The organ allocation is based on your clinical and medical condition only.” 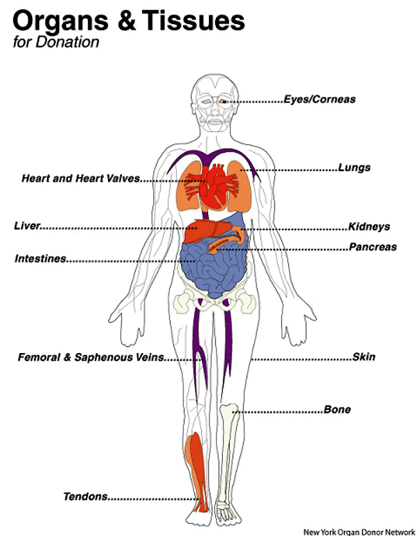 The most important thing to remember when considering becoming a donor is that there are a lot of people dying in need of organs.

“The whole allocation process is based on the sickest first, and even then we can’t seem to save all of them because a donor may not become available for a specific person,” Kadry said.

The shortage cannot be supplemented with donations from living people because many have other health concerns that prevent donation of a kidney or part of their liver. Plus, the number of live donors is limited. Doctors need to ensure that no harm comes to the donor and make sure that they’re healthy enough to undergo live donation.