Masa 14, 1825 14th St. NW, will offer the three margaritas at the bar/lounge during lunch and dinner, as well as at the 64-seat rooftop deck from 3 p.m. to close. Five small plates featured on the restaurant’s new spring menu will be available at the bar/lounge for $5 each: mini brisket tacos, al pastor tacos, octopus ceviche tostadas, Veracruz chicken chalupa and mini an ancho chile mahi mahi quesadilla. Additionally, the restaurant will have DJs spinning music from 7 p.m.-close.

Zengo, 781 7th St. NW, will offer complimentary chips and salsa and passed hor d’oeuvres in the lower level lounge beginning at 3 p.m. in addition to the margaritas. A DJ will play from 7 p.m.-close. 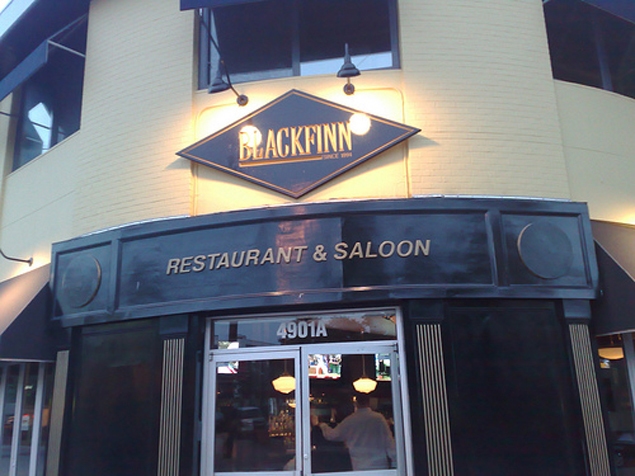 The BlackFinn American Saloon, which had been at 4901 Fairmont Ave, Bethesda since 2007, closed suddenly last month without warning.

Richard Greenberg of Greenhill Capital, the restaurant’s landlord, told Bethesda Magazine that the company, which was behind on rent, wasn’t told the eatery would close. He said they had attempted to make arrangements to keep the restaurant open and even reached one agreement that BlackFinn management never signed.

The restaurant suddenly closed, posting “BlackFinn American Saloon in Bethesda has Permanently Closed its Door for Business. We want to extend a sincere thank you to the Bethesda community for the support you have shown during our time serving you. Thank you, Team BlackFinn”

The D.C. location is still open.

Greenberg said Greenhill changed the locks and posted no trespassing signs two days after BlackFinn closed. He told the magazine it “remains to be seen” if the owners of the restaurant will attempt to claim the property inside the space. “They went silent and this is what happened.”

Greenhill is looking for another tenant, likely another restaurant.

The fast-casual Italian restaurant Vapiano is featuring fresh strawberry dishes and cocktails to celebrate spring and strawberry season. The strawberry options will be available through May at all D.C. area locations including M Street, Chinatown, Dulles Town Center, Reston Town Center, Bethesda and Ballston.

Special dishes include the house-made strawberry spinach salad with baby spinach, strawberries, goat cheese, red onion, pine nuts and raspberry maple dressing for $9.95; and the crema di fragola, a dessert with mascarpone crème and fresh strawberries for $2.95 for a small or $3.95 for a large.

City Tap House at 901 9th St. NW is celebrating Savor: An American Craft Beer & Food Experience’s return to the National Building Museum with a weekend of events. Tickets to Savor are sold out.

A Sierra Nevada Tap Takeover will be held May 8 from 8 p.m.-close. All 40 of City Tap House’s draft lines will be dedicated to Sierra Nevada Brewing Co., which will pour its year round, seasonal and rare styles. Prices range from $5-$10 per draft. Members of Sierra Nevada’s national sales team will be on hand, and City Tap House’s culinary director Brian Cooke will recreate specialty bites found at the Sierra Nevada’s Taproom in Chico, Calif. including their famous Torpedo Beer Cheese.

Colorado Brewers Night will be held May 9 from 10 p.m.-close. The beer lines will have Colorado breweries Oskar Blues Brewery, Left Hand Brewing, Avery Brewing Co., Great Divide, Odell Brewing Co., New Belgium Brewing, Boulder Beer Co., as well as Funkwerk’s Brewery. Prices range from $5-$10 per draft. For the perfect pairing, Cooke will create a variety of Colorado-inspired specials including Colorado Rack of Lamb and a rendition of Denver’s famous green chili sauce. Also, representatives from the Colorado-based breweries will be on hand throughout the evening.

On May 10, a Locals Only brunch will from 11 a.m.-3 p.m. Guests will enjoy a la carte dishes off Cooke’s regular brunch menu along with 10-12 suggested pairings from D.C.-based breweries such as 3 Stars Brewing Co., Evolution Craft Brewing Co., D.C. Brau Brewing Co., Atlas Brew Works, Port City Brewing Co. and Virginia’s Hardywood Park Craft Brewery, among others. Prices will range from $5-$7.

Also, the official Flying Dog Brewery Savor After Party will be held May 10 from 10 p.m.-close. Frederick’s Flying Dog Brewery is one of Savor’s official beer collaborators and they’ve partnered with Firestone Walker Brewing Co. out of Paso Robles, Calif., to create the official Savor 2014 beer, a blended robust porter with portions that have been barrel aged called Hydra Cuvee. City Tap House will tap a keg of the limited edition beer for guests who stop by after the Savor event has concluded. Additional beers from Flying Dog Brewery and Firestone Walker Brewing will also be available throughout the evening with prices ranging from $5-$10 by draft. 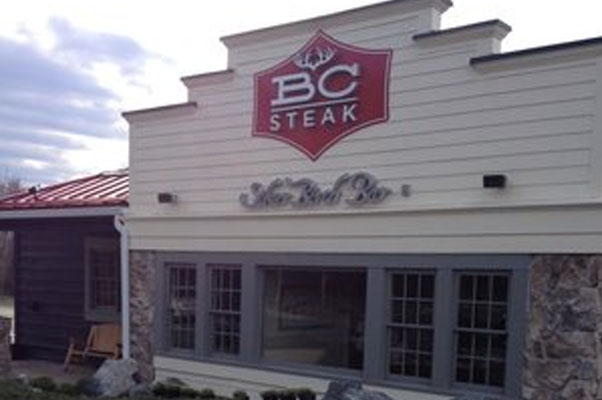 The new BC Steak in Gaithersburg. (Photo: Jessica L./Yelp)

Capitol BC Restaurants has transformed its Bugaboo Creek Steakhouse at 15710 Shady Grove Road, Gaithersburg, and renamed BC Steak.

It is the first of the company’s 10 steakhouses in New England and the Mid-Atlantic to unveil the sleek new concept and menu. Gone are Bugaboo’s the animatronic moose and bison heads that come to life. The only remnants of the former Bugaboo Creek are two black antler chandeliers in the renovated Silver Birch Bar. Bill Burnett, BC Capital’s president and COO, said that children armed with iPads and smart phones don’t blink an eye at an animatronic moose. So to compete with other steakhouses like Outback and Longhorn, they’ve developed the new concept.

“We needed to change the name, change the décor and get a fresh start,” said Burnett, a former vice president for companies that run Houston’s and The Capital Grille.

That new $500,000 look keeps the lodge feel, but pulls out the clutter, giving the 7,300-square-foot restaurant a more refined look with red velvet couches, lounge chairs and landscape paintings.

The new menu was created by chef consultant Mike Hufler. Prices are more expensive, but food quality has been raised. Entrees range from about $15 for roasted half chicken to $29 for a 7 ounce filet topped with crab meat and béarnaise sauce.

Ron Robbins from the Clyde’s Restaurant Group updated the drink menu, which now includes an expanded wine selection and offers martinis and Manhattans for $5 during happy hour. There is a new shuffleboard table in the center of the bar area.

The garden space is still under construction, but when it opens it can be reserved in advance for 8-10 guests for a private dining experience. A dedicated server will bring food and drinks up from the main restaurant.
For $125 per person, not including alcohol, you and your guests will be able to order unlimited dishes from the regular menu as well as a special menu. “Basically, we’re just gonna cook for you until you are full,” Silverman said. After alcohol, tax and tip, the cost will be about $200 each.

Reservations will be accepted online once the rooftop is ready. In the meantime, Rose’s front patio with 10 seasts, opened today for al fresco dining from the regular menu. 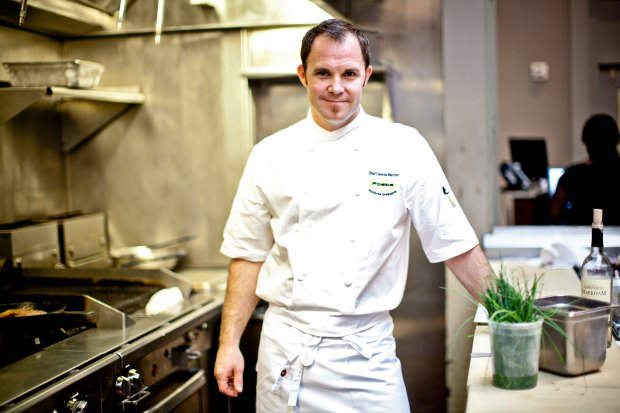 Dennis Marron, who has been executive chef for several years at Kimpton’s Poste Modern Brasserie at 555 8th St. NW, is leaving the Penn Quarter restaurant for Kimpton’s new Hotel Monaco in Pittsburgh.

Marron will head to Pittsburgh in July. The hotel is slated to open in late-2014 downtown. The nine-story hotel in a 1902 Beaux-Arts style building will offer 247 rooms, a fitness center, 9,000 square feet of meeting space and a 120-seat restaurant.

With a degree from the Culinary Institute of America, Marron has years of restaurant experience across the United States, including Scala’s Bistro, Mecca and Indigo in California and Craftsman Restaurant in Minneapolis. In D.C., he worked under chef and owner Jeff Bueben at Bistro Bis, where he perfected the kitchen skills that led to executive chef roles first at Kimpton’s The Grille at Morrison House and then its sister restaurant, Jackson 20. In both positions, Marron introduced monthly pig roasts, and extensive canned beer programs.

Marron’s wife is from nearby Latrobe, and her family still lives there.

Robert Wiedmaier is the latest to announce a new restaurant at Ronald Reagan National Airport.

Wiedmaier, the chef behind Brasserie Beck, Marcel’s and Mussel Bar, is planning a Provencal restaurant that will emphasize French county cooking. It will source meats, fish and produce locally.

Penang at 4933 Bethesda Ave., Bethesda, is preparing to reopen Wednesday after a $60,000 renovation. The Malaysian and Thai restaurant has been closed several weeks to undergo the facelift.

It is the first time the restaurant has remodeled is it opened in 2001. Owner Kevin Cheah described the new look designed by At Design Partners as vintage warehouse, but modernized with vintage wine racks at the bar, porcelain “wood” planks on the walls and a subway tile bar in an attempt to appeal to a younger crowd.

The menu will remain the same.