Draft Day Is No Trophy Winner, but Is Fun

At the NFL Draft, Cleveland Browns general manager Sonny Weaver has the opportunity to rebuild his team when he trades for the number one pick. He must decide what he’s willing to sacrifice on a life-changing day for a few hundred young men with NFL dreams. 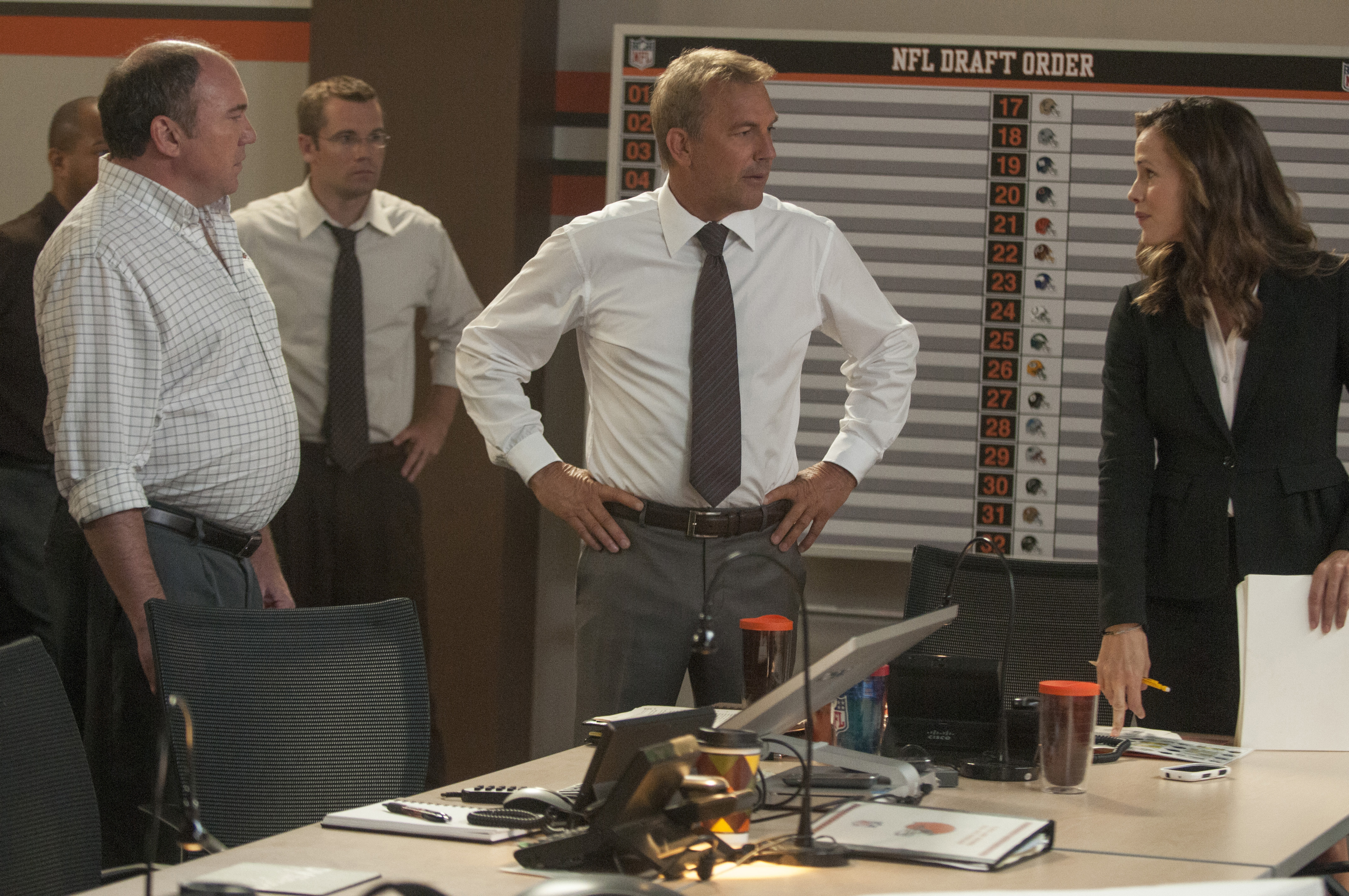 Cleveland Browns GM Sonny Weaver Jr. (Kevin Costner) need to do something to shake up his team and his reputation. Fans haven’t forgiven him for firing their beloved coach and his own recently deceased father, owner Harvey Molina (Frank Langella) wants to make a splash and threatens to can Sonny if they don’t, and Sonny’s doubting his own instructs. Adding to the stress is Sonny’s secret romance with salary cap manager Ali (Jennifer Garner), who just told him she’s pregnant, and there’s 12 hours to go on Draft Day.

Sonny’s had his eye on linebacker and tackling machine Vontae Mack (Chadwick Boseman), a guy’s who’d strengthen the team, but whose rap sheet gives pause. Then there’s hometown favorite and running back Ray Jennings (played by Houston Oilers’ RB Arian Foster), whose father Earl Jennings (Terry Crews) played for the Browns. He’s happy with his quarterback, Brian Drew (Tom Welling), but Drew’s past season was marred by injuries. When he gets an early morning phone call from Seattle Seahawk’s general manager Tom Michaels (Patrick St. Esprit) offering to trade their first choice draft pick, which everyone’s pinned on QB Bo Callahan (Josh Pence) whose agent is Chris Crawford (Sean Combs), Sonny knows it would draw the flashy media focus Molina wants, but, recognizing his desperation, they’re asking a very high price – his next three years of first round picks. Reluctantly, he takes it and all hell breaks loose.

Costner dons few facial expressions, but we can see his interior chess game. His decision starts the rumor mill on local radio. Molina is happy, but vain coach Vince Penn (Denis Leary) is upset that he’s been left out of the decision making, the team trainer picks the moment to inform him that Drew is in the best shape of his life and initial inquiries into Callahan’s background offer unsubstantiated red flags as draft pick hopefuls continuously make their case. Meanwhile, Sonny’s mom Barb (Ellen Burstyn) shows up with his ex-wife (Rosanna Arquette) in tow to scatter his dad’s ashes.

Director Ivan Reitman and writers Scott Rothman and Rajid Joseph may use a bit of misdirection, but the maze they’ve given Sonny to navigate and his last minute switchbacks are full of suspense and, ultimately, pay off with a highly satisfying climax, both personally and professionally. The background investigation on the first pick quarterback is particularly deft in the writers’ use of psychological tells and tricks of the trade. The film is briskly paced, sort of like a big screen 24.

If you have the feeling you have already seen Draft Day, you did in 2011’s Moneyball. Made with the NFL’s complete cooperation, Draft Day is an authentic window into the NFL like we’ve never seen before on the big screen. Filmed at the Browns’ training facility, there’s a certain thrill in actually seeing your team represented as part of the story; their actual team uniforms, logos, stadiums and players are all there. Even league commissioner Roger Goodell shows up, only to get booed by the draft’s typically rowdy fans. And ESPN’s Chris Burman hosts the televised portion of the draft as he does on draft day. It really does feel like you’re being let in on a secret peek behind the curtain, or sitting right there at Radio City Music Hall. In the real-life draft, much of the dealing and research takes place months in advance, but the compression and the ticking clock serve the drama. While the actual trading and negotiating is interesting, we get a bit too much personal story like Sonny and Ali’s relationship or Sonny’s crazy mother. Rated PG-13. Opens Apr. 11, 2014.