The interior of Campono features wood on the walls, tables and stacked along the walls to fire the pizza oven. (Photo: Campono)

The restaurant in the former Cup’a Cup’a space is named for the village in Italy’s Marche region where Kinkead has family. The menu features Neapolitan rosso and bianco (red and white) pizzas, hot and cold subs, salads, breakfast, coffee and house-made gelatos and sorbeti.

The traditional, whole wheat and gluten-free pizzas are baked in an 800-degree wood-burning oven and cost $9-$18 for the red and $12-20 for the white specialty pizzas such as the Abbruzzo with tomato sauce, Italian sausage, broccoli rabe, mozzarella and olives or the white Sicilia Bocci with sautéed cauliflower, leek cream, raising, pine nuts, garlic bufala mozzarella and parmesan. Diners can also top their own one-topping pizza for $12 (small) or $16 (large). Additional toppings cost extra.

Among the subs are the cold Lazzio with capacola, salami, mortadella, ham and provolone or the hot Stacoto with beef brisket, onion agrodolce, spicy slaw and horseradish sauce. Sandwiches range from $8.50-$10.

The 55-seat restaurant is beside Kinkead’s Ancora restaurant, which is currently closed for renovations. Everything on the menu can be ordered to-go. It is open from 7 a.m.-9 p.m. daily.

Hank’s Oyster Bar at 1624 Q St. NW in Dupont will begin serving lunch between 11:30 a.m.-3 p.m. weekdays beginning Apr. 1, the restaurant tweeted on Friday. The Dupont location along with its sister restaurants on Capitol Hill and in Old Town Alexandria serve lunch only on Fridays now.

With the expanded lunch hours, the Dupont location will expand its mid-day menu to include sandwiches such as grilled cheese with tomato jam, a beer-battered cod sandwich with tartar sauce and Old Bay French fries, oyster and shrimp po’ boys and small plates plus steamed mussels, oysters on the half shell or a veggie-plate. 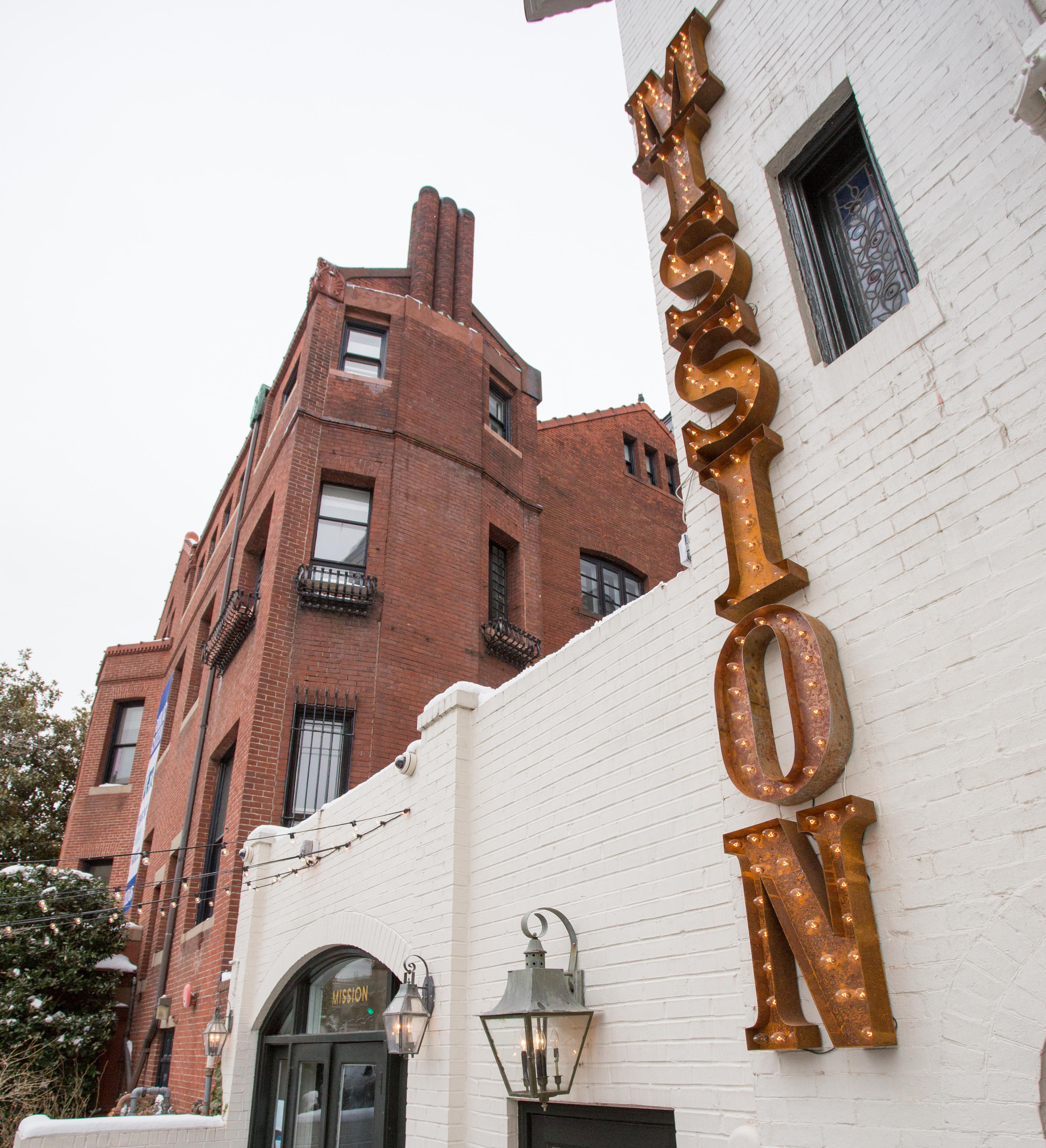 The menu from chef Rodrigo Albarran, who owns R&R Taqueria in Elkridge and Perry Hall, Md. that he’ll continue to operate, includes traditional Mexican cuisine such as fajitas and chicken, beef and pork tacos like at R&R along with specialty tacos such as mahi mahi, chipotle shrimp, chorizo, picadillo, pablano peppers and potatoes, and pork belly. Tacos and fajitas range from $11-$15. There’s also tilapia baked in a banana leaf, cactus sopes, whole clam soup, mole chicken, steak with chorizo and ribs with a spicy barbeque sauce. Entrees range from $13-$18. The menu also includes a chorizo burger, a caliente burger with ghost peppers and pepper jack cheese, and Cubana burger with egg, ham, a beef hot dog, pineapple and cheese. Burgers range from $11-$14. Sides include grilled jalepenos and nopales cactus, black beans, refried beans, sweet plantains and waffle fries. The bar has almost 50 types of tequilas and mezcals as well as margaritas and has eight beers, including Mexican varieties, on tap.

The restaurant has a wooden, 23-seat bar lined with electrical outlets to charge your phone downstairs plus a marble-topped bar upstairs, three dining rooms and a 35-seat outdoor patio for warmer weather. There is also a loft space with its own bar. Mission is decorated with longhorn horns, stained glass, a fake fireplace and reclaimed church pews with wood, exposed brick, brown leather and exposed lightbulbs. There is also a phone booth on the second floor with a phone that doesn’t work, but outlets to charge your phone and make calls.

Mission opens at 5 p.m. daily for lunch, but will add lunch and brunch in the spring.

Cheesetique, the specialty cheese shop with a wine shop and restaurant in Del Rey and Shirlington, is looking for a location to open a third shop.

“Got a great location we just MUST consider? Let us know here! As we go through the process, we’ll post lots of updates so you’ll feel like you’re right there with us – through location scouting, permit bliss, build-out heaven and the final big opening.”

Vinoteca at 1940 11th St. NW has opened its front patio and backyard Plaza Bar. Al fresco diners can enjoy an expanded new grill menu of housemade hot dogs, burgers and other grilled snacks, sip new spring cocktails, play a round of bocce or enjoy a brunch in the sun. 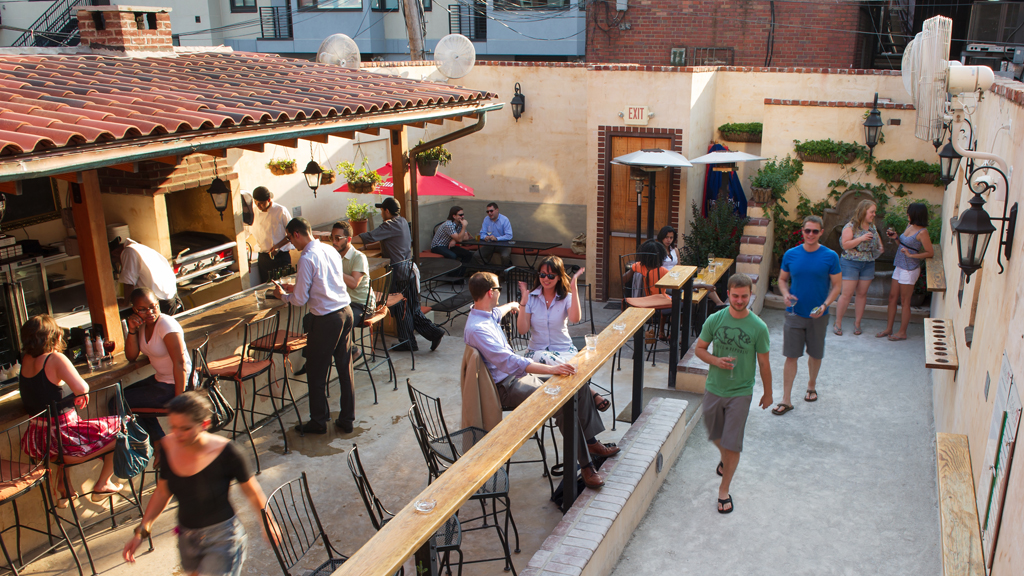 Vinoteca’s Plaza has opened for the spring. (Photo: Vinoteca)

Equipped with a full outdoor grill, chef Lonnie Zoeller has amped up his grill offerings with an expanded menu of housemade hot dogs and burgers just for the spring season. Zoeller began making his own hot dogs last year and has added several new varieties including the Who Dat Doggy, a boudin pork dog with grilled red onions and remoulade, and the Barbie Dog, chicken dog with BBQ, cheddar and apple. These join the classic Plaza Dog topped with ketchup, mustard and relish, the Frankfurter topped with homemade sauerkraut and caraway mustard, and a spiced-up veggie dog. All hot dogs are $7 with $1 off during happy hour..

Burger lovers now have three juicy, grilled-to-order choices: the O.G. Bocce, a local beef burger topped with basil aioli, fresh mozzarella, grilled red onions, lettuce and tomato; the Holy Mother of Pork topped with fig and bacon jam, gruyere and frisee; or the Ciao Fungo, a portobella mushroom burger topped with roasted red pepper, feta and arugula. The O.G. Bocce and Holy Mother of Pork burgers are $9 ($8 at happy hour), and the Ciao Fungo is $7 ($6 at happy hour).

Other grilled snacks include beef skewers with chimichurri, onions and queso fresco; chicken skewers with honey, lime, garlic and cashews; and grilled cauliflower with Asiago cheese and chives.

Voting in the four public voted categories of the Restaurant Association Metropolitan Washington’s annual Rammy Awards is now open. The public can vote through Apr. 27. Winners will be announced at the 32nd annual awards gala on June 22 at the Washington Convention Center.

This year, the public will decide the winners of the Favorite Gathering Place of the Year category, awarded to a neighborhood hangout where the atmosphere and vibes are just as important as the food and drink. The nominees are Bar Pilar, Bistro du Coin, Cashion’s Eat Place, Hank’s Oyster Bar in Dupont and Tune Inn.

The public will also decide the Favorite Fast Bites award given to a fast-casual restaurant that demonstrates a dedication to great food and superb service. The finalists are Amsterdam Falafelshop, Bayou Bakery, Buzz Bakery, Red Apron Butcher and Woodward Takeout Food.

Also, the public will choose the winners of the Upscale Casual Brunch and Everyday Casual Brunch winners, presented to restaurants that demonstrate dining excellence and service for their brunches, one in the upscale environment and the other in a more casual, everyday environment. Nominees for the upscale brunch are Art and Soul, Blue Duck Tavern, Mintwood Place, The Source by Wolfgang Puck and Vermilion. Finalists in the casual brunch category are DGS Delicatessen, Et Voila!, Pearl Dive Oyster Palace, Pizzeria Orso and Ted’s Bulletin on Barracks Row.

Each weekend through Apr. 13, any diner who tweets a picture of brunch using @RammyAwards or #RAMMYSBrunch will be entered to win a pair of tickets to the 2014 Rammys Gala. The winner will be announced the week of Apr. 28.

You can cast your votes at ramw.org.

Republic Kitchen and Bar, a “modern comfort food” restaurant, has opened at 801 N. Quincy St. in Ballston in the space formerly occupied by Leek American Bistro, which closed in November, and Thai Terrace before that. 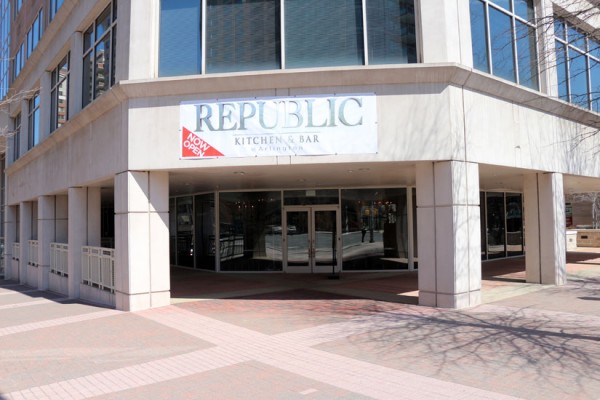 Republic Kitchen and Bar has opened in Ballston. (Photo: ARLnow)

Republic had a soft opening last week serving dinner beginning at 4:30 p.m. and will open for lunch as well beginning this coming week.

The restaurant is making everything, except French fries, from scratch daily, general manager and owner Anthony Catselides told Arlnow.com. “We’re serving high-quality good at a medium price point” he said. No entrée is priced over $20 and most cost less than $15.

Owner and executive chef is Alan Newton, formerly of McCormick and Schmick includes hints of international, Asian fusion and Southern cooking in the menu.

Andrés’ ThinkFoodGroup originally launched the concept in 2011 as a pop-up in the former Café Atlantico.

Waugaman, who joined ThinkFoodGroup after leaving Neighborhood Restaurant Group late last fall, has been working with the company’s research and development team creating a menu designed to be friendly to upscale hotel diners.

A menu with appetizer, entree and dessert sections will replace the free-flowing menu from the pop-up, but many of the most popular dishes, like vermicelli prepared like pudding (ie pioneering mac ‘n cheese), Hangtown fry oyster and bacon omelet, and oysters Rockefeller will still be on it. Burgers, hot dogs and po’ boys will likely join them. The restaurant will be the first of Andrés’ eateries to serve weekday breakfast in the DMV, although locations outside our area do serve the morning meal.

Work is ongoing to transform the space, which formerly was Michel Richard’s short-lived Michel from October 2010-February 2012 and Fabio Trabocchi’s Maestro before that. Vincent Celano of the Celano Design Group is overseeing the new look. A large bar will greet diners and the space will be open and light with wood floors and exposed brick.

Drink the Vote at The Coupe in City Primary

While many D.C. residents are tempted to hit the bottle when it comes to city politics, The Coupe at 3415 11th St. NW in Columbia Heights is taking a “straw poll” in the city’s primary election this Tuesday.

Now through midnight on Apr. 1, customers can order their favorite candidate’s drink to cast a vote. The restaurant has also invited each candidate to put campaign materials on display at the restaurant.

“We see one of the main roles of The Coupe to be a community gathering place, a place for our guests to engage with not only our restaurant community but with the DC community at large,” general manager Maxwell Hessman said in a release. “There’s been a lot of talk about many D.C. residents not being engaged or informed about local politics during this primary election; we see this as our opportunity to help get some information out to voters and also have some fun with it.”

The Cocktails & Candidates menu from The Coupe. (Photo: The Coupe)

The Coupe says the “pairings of cocktails to candidates is totally random and no reflection on them or what we think they might drink.”

The candidates and their cocktails are:

Also, The Coupe and sister restaurants The Diner, Open City and Tryst will offer expanded happy hour drinks ad a free iced tea with any purchase to diners with an “I voted” sticker on election day.