Every year about 50,000 Americans die of colon cancer. The disease is the second leading cause of cancer deaths in the United States, second to lung cancer.

According to Dr. Joel Haight, medical director of Penn State Hershey Endoscopy Center in Pennsylvania, while still a deadly disease, the rate of colon cancer began decreasing in 1990 when people started to be tested more frequently. That’s good news, since Haight says screening is the key to prevention. 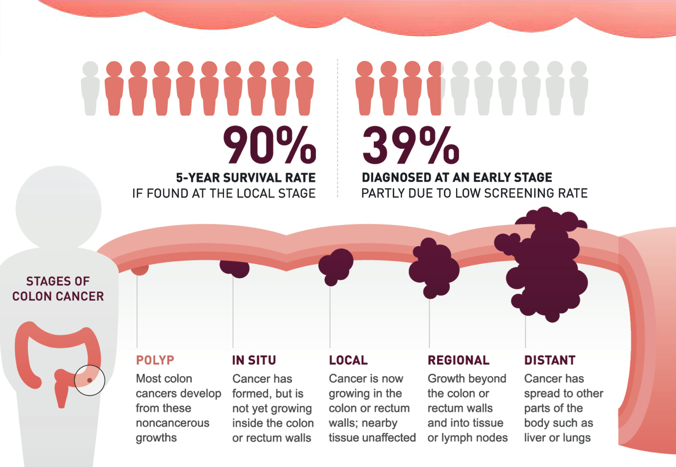 If colon cancer is found early, it can be cured. (Graphic: American Cancer Society)

“Timing really makes a difference to your survival,” he said. “If colon cancer is found early, it’s curable.”

Colon cancer screening is highly beneficial because finding and removing polyps before they become cancerous reduces the future risk for getting colon cancer. For the general population, both men and women, normal screenings should begin at age 50 for Caucasians and 45 for African-Americans. Those without risk factors should have screenings once every 10 years.

Those who have had abnormal results during a previous procedure, have a family history of colon cancer or have had colon polyps are considered at higher risk. Patients with inflammatory bowel disease or other hereditary diseases may also have cause for concern. A physician may advise screenings at an earlier age and conduct testing more frequently depending on the circumstances.

There are various ways to test for colon cancer, including stool occult blood testing and various imaging studies, including sigmoidoscopy, barium enema and CT colonography. The drawbacks to those tests are that they don’t allow for removal of polyps at the time of the procedure or they do not look at the entire colon. The colonoscopy remains the most common and the most recommended screening test for colon cancer.

The symptoms of colon cancer are rectal bleeding, abdominal pain, anemia, change in bowel habits and weight loss. If cancer is found before a patient exhibits symptoms, the five year survival rate is 71 percent.

“If you wait until you have symptoms and you find colon cancer, your prognosis is significantly less for five year survival — it’s only 49 percent,” Haight said.

Typically, treatment of colon cancer begins with removing the tumor, either endoscopically or surgically. During the procedure, doctors determine if it has advanced to the lymph nodes or any other tissue and determine the stage. The stage will determine what additional treatment, if any, is required. If the tumor is removed completely, no further treatment is needed except follow-up visits. However, some circumstances warrant radiation, others merit chemotherapy and sometimes both are required.

One misconception Haight warns against is that colon cancer is no longer a concern after a certain age. Though screening starts at age 50, colon cancer risk increases over time, so it is important for people to continue to be screened as they age.

“The fact is that colon cancer risk increases with age; it never plateaus and it never goes down, it continues to rise with age,” he said.

Would you like to write about local health and fitness issues for DC on Heels? Email your resume and three writing samples to our editor.