Sail Into Battle with 300: Rise of an Empire

300: Rise of an Empire is a new chapter in the epic saga of 300, which takes the action to a new battlefield – the sea. The story pits the Greek general Themistokles against the massive invading Persian forces ruled by the human-turned-god Xerses and led by Artemisia, the vengeful commander of the Persian navy. Knowing his only hope of defeating the overwhelming Persian armada will be to unite all of Greece, Thermistokles ultimately leads the change that will change the course of the war. 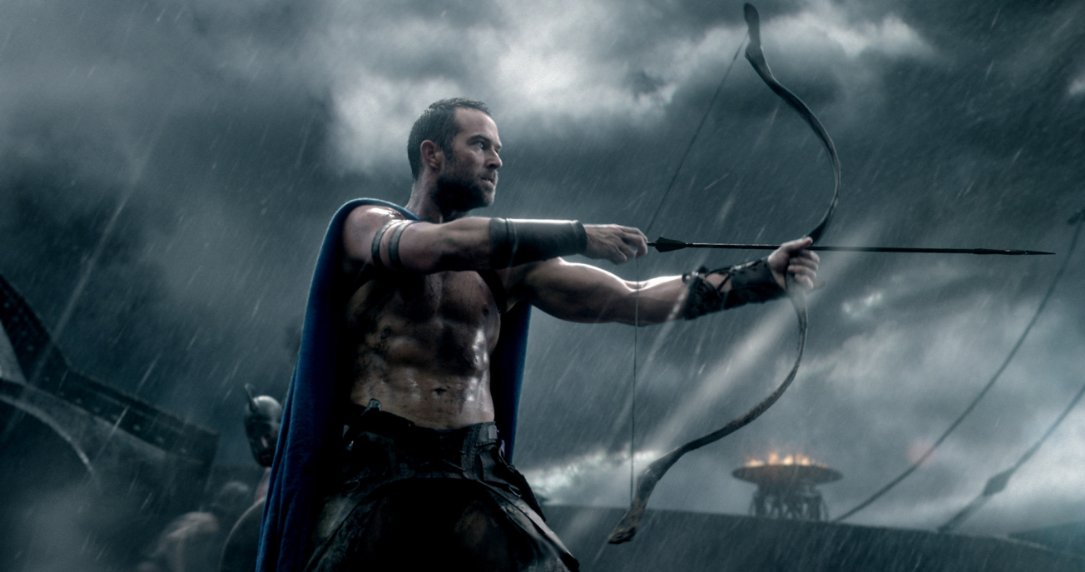 Sullivan Stapleton as Thermistokles in 300: Rise of an Empire (Photo: Warner Bros. Pictures)

Man, woman, gay, straight, bi: There’s something for everyone in 300: Rise of an Empire, the swords-and-sandals sequel to 300. Rise of an Empire takes place before, during and after Zack Snyder’s 2007 original starring Gerard Butler as King Leonidas of Sparta.

In this installation, written and produced by Snyder but directed by commercial director Noam Murro, we get the back story of Xerses (Rodrigo Santoro), the son of Persia’s King Darius (Igal Noar) who was killed by Thermistokles (Sullivan Stapleton) in a battle at the battle of Marathon 10 years earlier, which plays out in flashback. Back to the film’s present, while Xerses is defeating Leonidas’ troops on the southern coast of Greece as revenge for his father’s death, Artemisia (Eva Green), Darius’ and now Xerses’ goth/BDSM naval commander, is leading Persia’s 1,000-ship fleet against troops from Greece’s other city-states led by Thermistokles on the northern coast of the Aegean Sea.

Xerxes and Artemisia (who wears elaborate dresses even on board) plan to burn Athens and the rest of Greece. Artemisia was a Greek whose mother was raped and her family murdered in front of her as a child. Then the Greeks took her as a slave on a ship violating her for years then eventually leaving her for dead. She is found by a Persian who rescues her and teachers her to be a great warrior. She becomes an aid to Darius, eventually commanding his navy.

After Leonidas’ troops have been defeated and Xerxes has burned Athens, Spartan Queen Gorgo (Lena Heady reprising her original role who also serves as this installment’s narrator) brings the rest the Spartan forces to Thermistokles aid as Xerxes watches the battle from a cliff above. If Rise of an Empire is anywhere near as successful as the original, more installments could follow set in the following year when the united Greeks, this time with Spartan help, put an end once and for all to Persian dreams of local conquest with same-day land and sea victories at Plataea and Mycale, respectively.

The movie is a theatrical, romanced, highly graphic view of Greek history under the second Persian invasion of Greece (480–479 BC). The Battle of Artemisium was a naval engagement, concurrent with the battle of Thermopylae (300) and was fought between an alliance of Greek city-states and the Persian Empire in September 480 BC in the straits between the mainland and the northern tip of the island of Euboea. The film also focuses on the naval Battle of Salamis (480 BC), just south of Athens, in which Artemisia played a major role.

Filmed mostly on a digital set in front of green screens in Bulgaria, the computer generated backgrounds are impressive. The Persian scenes are the best with dazzling interiors with elaborate panther carvings and gently shimmering fish-scales patterns. The most impressive scene is when Xerxes returns from mourning his father as the god-king and addresses his people.

Stapleton doesn’t make anywhere near as ferocious a hero as Butler did, but he doesn’t try to. It is hard to argue that Green “steals” the picture, but hers is the kind of unapologetic arch-villain role that is all-too rare for actresses. It is a terrific performance, and she is aided by her tragic back story that gives the film a moral depth. She is spectacular, giving a fully physical and genuinely shaded star performance. She has a great (though unlikely) confrontation with our hero that plays with the whole sex/violence theme while offering character development that pays off in the finale. The rest of the bearded-but-waxed characters are relatively stock, and the dialogue often forced whenever the violence stops. It’s not so much bad as it is unnecessary. The film has more action than the initial installment, and it is splendidly staged. I’d advise you to see it in IMAX, it is worth the higher price. Rated R. Opens Mar. 7, 2014.