Son of God Is Choppy with Hippy Jesus

The story of the New Testament, Son of God brings the story of Jesus’ life to audiences through compelling cinematic storytelling that is both powerful and inspirational. Told with the scope and scale of an action epic, the film features powerful performances, exotic locales, dazzling visual effects and a rich orchestral score from Oscar-winner Hans Zimmer. Portuguese actor Diogo Morgado portrays the role of Jesus as the film spans from his birth through his teachings, crucifixion and resurrection. 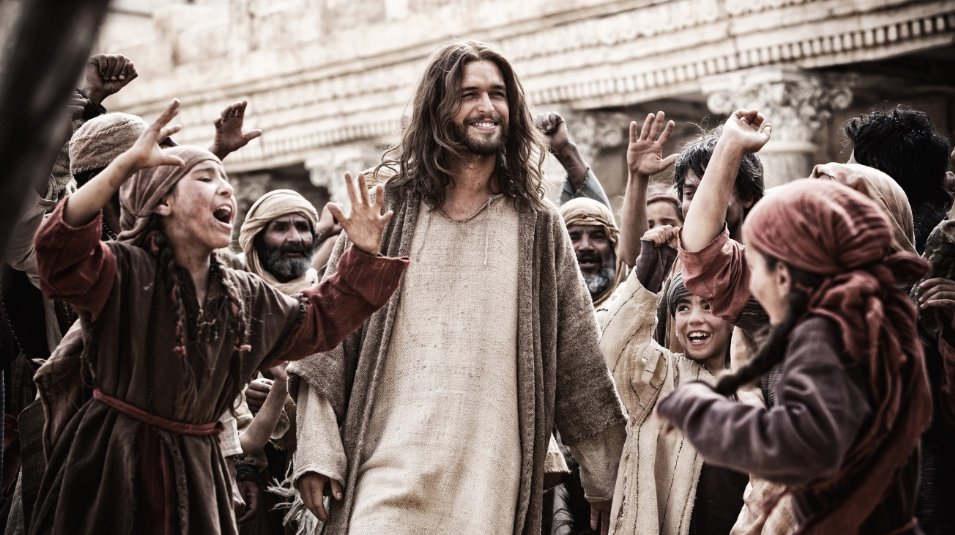 In 2013, husband and wife team Mark Burnett (Survivor, Shark Tank and The Voice) and Roma Downey (Touched by an Angel) teamed up as executive producer and star of The Bible, a 10-hour mini-series on The History Channel. Now the pair are back, this time she is the executive producer and he is the producer. They have re-cut portions of the mini-series and added some sections that didn’t air on TV into Son of God, a 2 hour 18 minute theatrical release directed by Christopher Spencer. Downey also plays Mary, mother of Jesus. Most notably missing from the mini-series is Satan, who was portrayed by an actor who looked a lot like President Barack Obama.

Son of God boasts impressive costumes, convincing violence, location shooting in Morocco, a score by Zimmer and a largely white cast with British accents — all of which make it a visually ambitious show. It’s most compelling as a parable about politics and least interesting whenever miracles enters the equation.

The movie hits most, although not all, of the high points of the Gospels. Following an 8-minute opening trip through the Old Testament’s greatest hits and the nativity scene, the film narrated by the Apostle John (Sebastian Knapp) finds a 30-something Jesus travelling around assembling his disciples. He says nothing but promises everything by speaking in metaphors.

Son of God dramatizes Jesus’ most iconic miracles, like raising Lazarus from the dead, turning water into wine, the multiplication of the fish and loaves (it looks like naan), healing the crippled man and walking on water. The earnestness of these scenes sometimes veers into camp. When Peter’s (Darwin Shaw) conviction that he can walk on water like Jesus falters, for instance, his glance downward results in a plummet underwater. And there is no narrative or logical transition between Jesus’ supernatural deeds. They are presented as more of a video scrapbook.

Unfortunately, the dialog is based on the King James Bible, so Jesus’ famous teachings such as “Let he who is without sin cast the first stone” doesn’t have as much impact when said “I’ll give my stone to the first man who tells me he has not sinned.”

Another problem is Morgado’s portrayal of Jesus. Although his performance gets at Jesus’ love and compassion, he plays the part too wimpy, a kind of hippy savior. But when Jesus kicks the moneychangers out of the temple, it seems almost incongruous. Greg Hicks is good as Pontius Pilate, who just wants to be rid of the trouble. He is less concerned with Jesus’ possible divinity than with losing control of the Jerusalem’s residents. The scenes in which Pilate squares off against Jewish high priest Caiaphas (Adrian Schiller), who wants Jesus silenced, are among the best of the film. The trial and crucifixion of Jesus, while not as violent as in Mel Gibson’s Passion of the Christ, are still somewhat graphic, but appropriate to the subject matter. The point is to show how much he suffered. Morgado’s stronger here, but as the risen Christ he’s back to the surfer dude we saw earlier.

It isn’t clear who the movie’s target audience is. Is it those who already believe or non-believers? While TV segments provide a foundation, the end result is less than seamless. The choppily edited patchwork technique and uneven special effects — likely will make Son of God less appealing to the mainstream crowd that might be drawn to Noah starring Russell Crowe, another big-budgeted, biblical-themed spectacle opening March 28, just in time for Easter. Rated PG-13. Opens Feb. 28, 2014.