There’s Something Funny About Last Night

About Last Night is a modern reimagining of the classic romantic comedy. This contemporary version closely follows new love for two couples as they journey from the bar to the bedroom and are eventually put to the test in the real world. 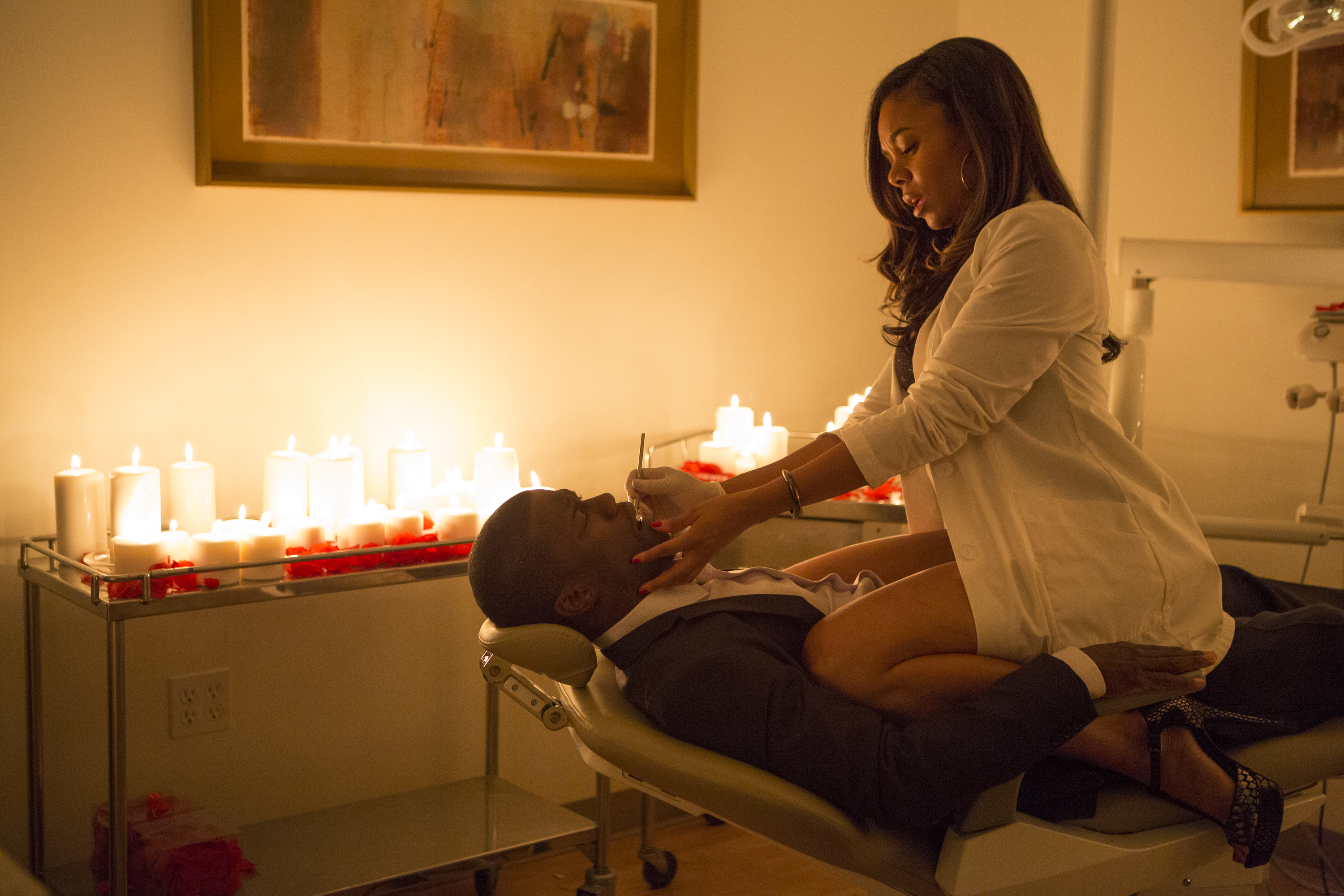 Joan (Reginal Hall) gets frisky with Bernie (Kevin Hart) at her dental practice in About Last Night. (Photo: Sony Pictures)

About Last Night is frisky and fun made all the more entertaining because of the chemistry between its quartet of lead characters.

Although it briefly pays tribute to its 1986 predecessor, and is loosely based on David Mamet’s play Sexual Perversity in Chicago, About Last Night is very much its own film. It splits from the original by setting the action in downtown Los Angeles instead of Chicago and casting African-American actors in the four leads. The original starred Demi Moore, Rob Lowe, James Belushi and Elizabeth Perkins. Belushi and Perkins’ roles were not as memorable as Moore and Lowe’s. But not in this version. All four actors have strong roles and leave a vivid impression.

Kevin Hart, fresh from the success of Ride Along, continues his streak. He plays the boisterous Bernie, whose best friend Danny (Michael Ealy) is more low-key and sensitive. The pair has rapport and their bond is believable. Ealy is an ideal straight man to the hilarious Hart and a charming romantic lead.

The film opens with Bernie telling Danny about a sex-filled night with Joan (Regina Hall). At the same time, Joan is telling her friend and roommate Debbie (Joy Bryant) about the encounter. The underlying question: Was it a one-night stand or will it grow into something more?

Soon after, the foursome meet at a bar. The reserved Debbie and the slightly morose Danny end up going home together. He’s still getting over a break-up, but their connection surprises them both. The potential for love is in the air.

Bernie and Joan continue hooking up, but seem to enjoy their verbal fireworks as much as what goes on between the sheets. Danny and Debbie grow serious and move in together, while Bernie and Joan develop a mighty — and outrageously comic — rancor. Their squabbling at a Halloween party and Thanksgiving dinner is particularly funny.

While this romantic comedy adheres broadly to boy-meets-girl/boy-loses-girl conventions, the performances and deft comic timing kick it up several notches. The film effectively explores relationships from first flirtation to blissful passion and through rocky patches.

The 1986 version and the current one have the same skeleton, but meat of the story is different. The differences are significant enough to allow the 2014 version to stand on its own and not feel redundant. The story hasn’t changed. It’s still about the sexual and romantic dynamics of a couple whose best friends are against their relationship. Nevertheless, the finished product is still recognizable as Sexual Perversity in Chicago, and the callbacks to the 1986