What a month for pop’s bad boy Justin Bieber. First, police raided his California home looking for evidence that he caused $20,000 damage to his neighbor’s home by egging it. During the raid, his boy Lil Za was busted for having Ecstasy and Xanax. Then he flew off to Colorado to go snowboarding just days later, only to be caught writing his initials in pee in the snow along the road. He’s also been caught tagging buildings and drag racing up and down the streets in his private tony community. 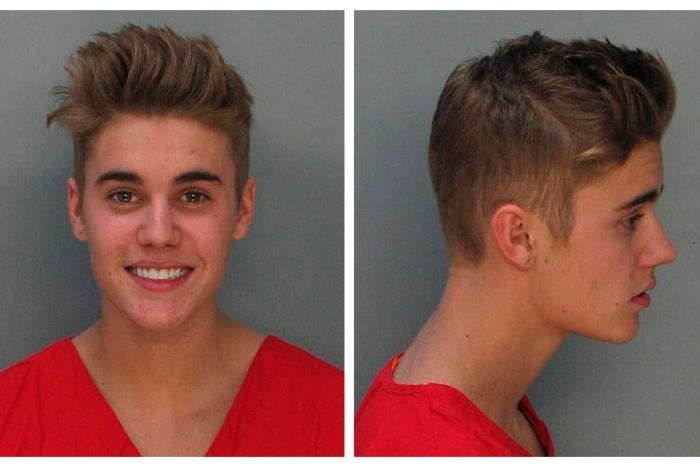 With “bloodshot eyes” and a stupor “look on his face,” the Baby singer was arrested in Miami early Thursday morning after leaving the SET night club in Miami Beach for DUI, drag racing, driving on an expired license and resisting arrest following an F-bomb laced rant. Police allege the pop singer admitted to having beer, marijuana and prescription drugs in his system.

After leaving the nightclub, the musician’s entourage had apparently used their cars to block traffic on Pine Tree Drive at 26th Street, a residential area, at around 4 a.m., creating a drag strip for Bieber.

Miami Beach police said Bieber was pulled over for speeding in a rented yellow Lamborghini and failed a field sobriety test. The other alleged drag racer, who was racing Bieber in a red Ferrari, was Khalil Amir Sharieff and he was also charged with DUI. The police report said the cars were going 55 to 60 mph in a residential zone posted at 30 mph.

This is a first-degree misdemeanor, which could get the Biebs up to six months in jail and have his license suspended for six months. But he may be eligible for a program for first-time offenders that reduces the charge to reckless driving, said defense attorney Mark Eiglarsh, who is not involved in this case. Florida has zero tolerance for underage drinkers and if the singer enters a program for first-time offenders Bieber will have to steer clear of all drugs and alcohol, as was the case with actress Lindsay Lohan.

Miami Beach Police Chief Raymond Martinez told the Miami Herald that Bieber was incoherent at the time of his arrest. He had his hands in his pockets and resisted arrest without violence, the chief said, adding that the singer was driving with a Georgia license that expired at least six months ago. Police allege that Bieber cursed out the arresting officer then admitted to having beer, marijuana and prescription drugs in his system.

His blood alcohol level was .04. That level was illegal, because he is under-age. The standard for someone driving under the age of 21 is .02.

The 19-year-old spent the rest of the night in jail then appeared in a Miami courtroom early Thursday afternoon. He stood silently in the courtroom dressed in a jail jumpsuit as his attorney spoke. The judge set bail at $2,500. Bieber posted bail and exited the courthouse a short time later.

After leaving the jail, Bieber climbed on top of his Escalade and blew his fans a kiss. In an Instagram post after his release, he said “What more can they say” next to a split photo of him and Michael Jackson. In the split he and Jackson are both waving to their fans after trying ordeals with the law.

Justin Bieber and Michael Jackson in similar poses after brushes with the law. (Photo: Justin Bieber/Instagram)

Jackson did a similar move by dancing and showing the peace sign for fans after leaving court in 2005 during his trial on child molestation charges. Jackson was acquitted.

Reports are that the Canadian was with his dad prior to the bust Wednesday night, with some suggestions he may have supplied the adult beverages. TMZ reports that Jeremy Bieber, 38, even helped block off a road for his son to drag race and that young Bieber gets his prescription pills from his mom – also a crime.

A source connected to Bieber said that the alleged DUI and his subsequent bad behavior doesn’t come as any great surprise and rehab could be the next step – if only to save face in the court’s eyes.