Is Justin Bieber the latest bad-boy who had a bright musical career then burned out?

Last week, his mansion in Calabasas, Calif., was raided by police seeking evidence that he egged is neighbor’s home and caused $20,000 in damages, a felony charge. During the raid, his friend rapper Lil Za was arrested for the possession of Ecstacy and Xanax.

Following all that stress, the 19-year-old singer and friends including his childhood pal Ryan Butler hit the slopes of Aspen for a weekend of snowboarding. But it seems Bieber causes trouble wherever he goes. 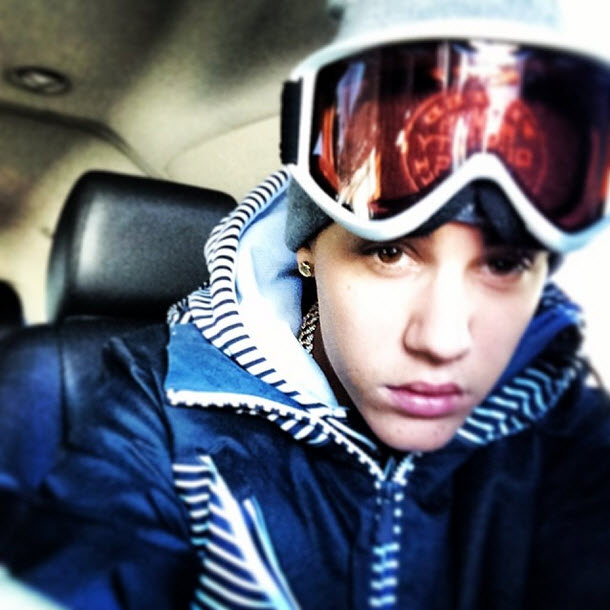 Justin Bieber posted this photo of him on the slopes in Aspen on his Instagram account. (Photo: Justin Bieber/Instagram)

On Sunday, while travelling in a motorcade of Escalades, Bieber jumped out alongside a private road in an wealthy residential neighborhood and urinated while surrounded by his bodyguards, the gossip site TMZ is reporting.

An eyewitness told TMZ that Bieber and his crew were driving in Snowmass, Colo., Sunday when his motorcade stopped, Bieber hopped out and proceeded to whizz in the snow while neighbors watched. He was gone in a flash, and stunned residents went over to inspect the scene where they say Bieber had peed his initials “JB” in the snow. 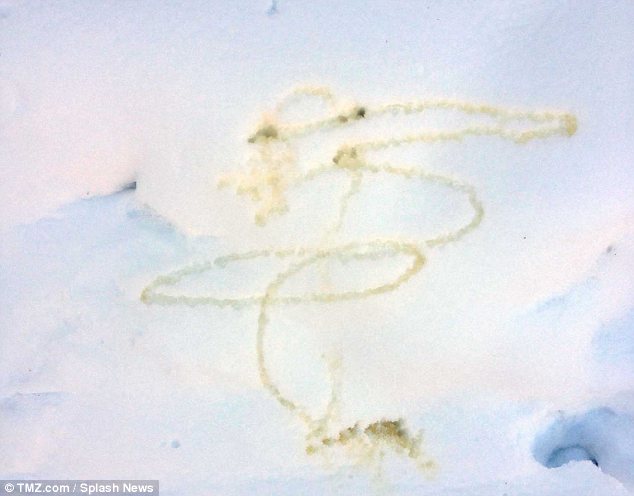 Justin Bieber reportedly peed his initial in the snow while on a snowboarding trip over the weekend. (Photo: TMZ)

Also over the weekend, radaronline.com released texts reportedly send between Bieber and ex-girlfiend Selena Gomez. They start with Bieber begging Gomez to come back and escalated to him sending a photo of his erect penis with the text “Don’t tell me you didn’t miss this.” Gomez responded by telling Bieber to go to rehab and asking “how can u let [Lil Za] take the fall for your actions?” “Can’t hear you over my cash, babe!” Bieber replied. “You’re only famous cuz of me.” However, other websites have reported the texts and photos are fake and were actually sent from someone who used to be close to him.

Speaking of the raid of his mansion, sources have said two large cookie jars filled with weed were in plain view when Los Angeles County Sheriff’s deputies search the house. There were also four or five empty codeine bottles in the mansion and three bongs — one in the TV room and two in the kitchen.

Foam cups that had elaborate drawings on them and the names of the people who used them were littered throughout the notorious party palace. The cups, the sources said, were used for Sizzurp (also called lean) — which TMZ reports is the Bieb’s drug of choice and which he prefers made with pineapple Fanta and codine rather than the usual Sprite. Sources told the gossip site he likes to draw on the cups with markers after using them. There were also empty Fanta bottles that were discolored, reportedly from the codeine.

Bieber is reportedly a fan of Actavis prometh with codeine cough syrup to make his “lean.” Street value runs around $800 a pint. You can either get it with a prescription or get it outside the U.S., like Bieber’s homeland of Canada. Sources say the singer downs between 8 and 12 ounces a day, which is a lot.

The sources also said there were lots of Swisher Sweets cigars laying around the house, which they said is Bieber’s preferred way to smoke marijuana. Reports also say he has a dedicated smoking room in the house, complete with hookah pipes. Sources say when cops showed up, some of his guests went into the room and flushed some of the drugs.

Luckily for the Biebs, the deputies were raiding the house for surveillance equipment and other evidence that could tie him to the egging and not drugs. They couldn’t open the jars and such, because it would have exceeded the scope of the warrant.

He is using drugs with alarming regularity and his people have been urging him to go to rehab, sources close to him have said. The Recovery singer is also reported to be taking lots of prescription pills, including Xanax, in addition to alcohol and weed.