In Ancient Greece 1200 B.C., a queen succumbs to the lust of Zeus to bear a son promised to overthrow the tyrannical rule of the king and restore peace to a land in hardship. But this prince, Hercules, knows nothing of his real identity or his destiny. He desires only one thing: the love of Hebe, Princess of Crete, who has been promised to his own brother. When Hercules learns of his greater purpose, he must choose: to flee with his true love or to fulfill his destiny and become the true hero of his time. 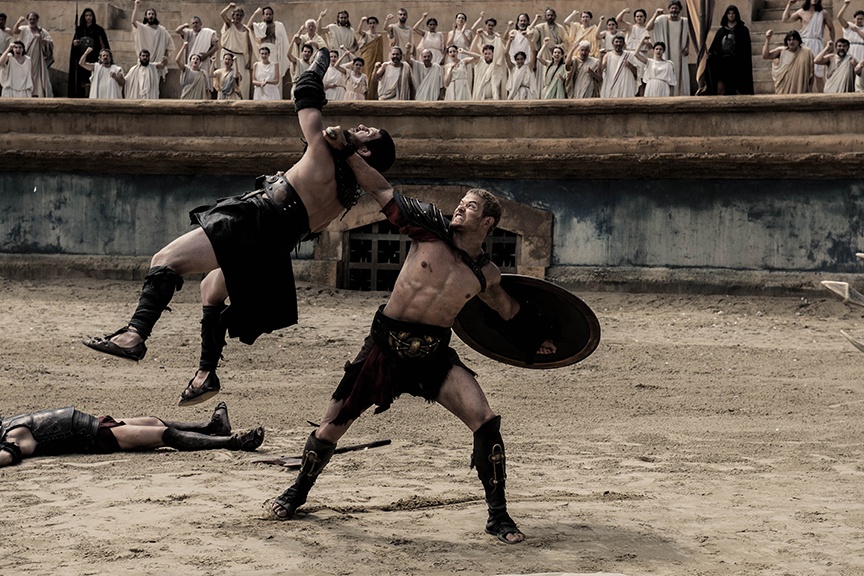 Hercules (Kellan Lutz) fights for his freedom after his step-father betrays him. (Photo: Summit Entertainment)

In the epic origin story The Legend of Hercules, Kellan Lutz stars as the mythical Greek hero – the son of Zeus, a half-god, half-man blessed with extraordinary strength. Betrayed by his stepfather, the King, exiled and sold into slavery because of a forbidden love, Hercules must use his formidable powers to fight his way back to his rightful kingdom. Through harrowing battles and gladiator-arena death matches, Hercules embarks on a legendary odyssey to overthrow the King and restore peace to the land.

As the title suggests, Renny Harlin’s The Legend of Hercules is an origin story that sets up the demigod character. Despised by his father King Amphitryon (Scott Adkins) since the day he was born, Hercules — the son of Zeus and Queen Alcmene (Roxanne McKee) — is sent to war after failing to elope with his true love, Princess Hebe (Gaia Weiss). The king favors his elder son, Iphicles (Liam Garrigan); unfortunately he is not warrior material let alone able to lead a kingdom and win the heart of the princess. As fate would have it, Hercules survived the war and returns to reclaim his love and kingdom from the wrath of the king.

One night, Queen Alcmene was ravished by the god Zeus. From this union, she would give birth to a boy whom his stepfather King Amphityrion named Alcides. Later in life, the boy would develop remarkable physique and abilities, taking on the name Hercules.

Other than these nominal details though, it seems the rest of this “origins” movie was not derived from the ancient myths at all.

Case in point, mythology told us how angry the goddess Hera was with Hercules because he was a product of Zeus’ infidelity, even driving Hercules mad to kill his own children. However in this film, we get a mild resigned Hera. In an Annunciation-like scenario, Hera appears to Alcmene and tells her that Zeus will visit the queen to plant his divine seed in her. It was even Hera who told Alcmene to call the boy Hercules.

The lady love of Hercules in this film, the Princess Hebe from Crete and her entire story line, along with the love triangle with Hercules’ inept half-brother Iphicles, is an original conception by the four scriptwriters, of which director Renny Harlin (who never seemed to have recovered after the unfortunate 1995 debacle “Cutthroat Island”) was one of them.

Watching The Legend of Hercules is like watching a compendium of all the sword-and-sandal films. The most dominant elements were from 300. This film, in fact, looked like a sequel of 300 because of the very similar style of computer graphics used for the sweeping scenery, the big crowds and the complex fight sequences. Having a B-list cast with only Lutz of Twilight fame as the most familiar name, we really should not expect too much. While similarly themed movies such as 300, Immortals and Clash of the Titans are known more for their visual aesthetics than storytelling, The Legend of Hercules failed miserably on both accounts. Rated PG-13. Opens Jan. 10, 2014.