R&B Singer Chris Brown and his bodyguard both declined to accept plea deals Wednesday in connection to their alleged Oct. 27 assault on Parker Adams outside the W Hotel in the District.

The singer, 24, was arrested in October after Adams said the singer hit him in the face outside the hotel and broke his nose. A police report states Adams told cops the melee erupted when he tried to crash a photo Brown was taking with his friends. According to a police report, Brown told the man, “I’m not down with that gay [expletive]” and “I feel like boxing.

Brown and his bodyguard each face a misdemeanor assault charge. 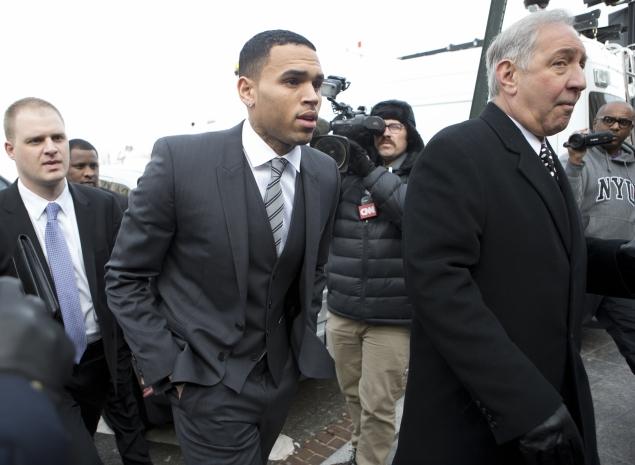 Brown appeared in court with his current girlfriend, Karreuche Tran, and sat quietly with bodyguard Christopher Hollosy — his co-defendant — as their lawyers formally rejected the plea deal. Brown wore a charcoal three-piece suit and a new dark brown hairstyle that replaced his recent bleached blond look.

Mark Geragos, Brown’s attorney, said that his client declined the deal, which would have include a guilty plea to simple assault, because he did nothing wrong.

The singer and his bodyguard will be back in court Feb. 20 to get a tentative trial date, but Brown’s attorney has asked that the singer not be required to leave rehab to attend. At the time of the alleged assault, the Grammy winner was on probation in California for a 2009 attack on his ex-girlfriend singer Rihanna.

As a result of the charge in Washington, a judge revoked Brown’s probation in California, but the ruling didn’t alter a requirement that Brown complete anger management rehab and community service including roadside cleanup and graffiti removal. The judge ordered Brown to complete 90 days of residential treatment and take all medications prescribed by his doctors.

The Grammy winner pleaded not guilty to the reduced misdemeanor charge in October and voluntarily checked into rehab for anger management days later. He was temporarily kicked out Nov. 10 for losing his cool and hurling a rock through a window of his mom’s car during a family therapy session.

If convicted of the simple assault charge here, Brown faces up to 180 days in jail and a $1,000 fine, prosecutors said. He could get more jail time in California if his Los Angeles judge decides the Washington incident violated his probation for beating Rihanna.