Ben Stiller directs and stars in The Secret Life of Walter Mitty, James Thurber’s classic story of a day-dreamer who escapes his anonymous life by disappearing into a world of fantasies filled with heroism, romance and action. When his job along with that of his co-worker are threatened, Walter takes action in the real world embarking on a global journey that turns into an adventure more extraordinary than anything he could have ever imagined. 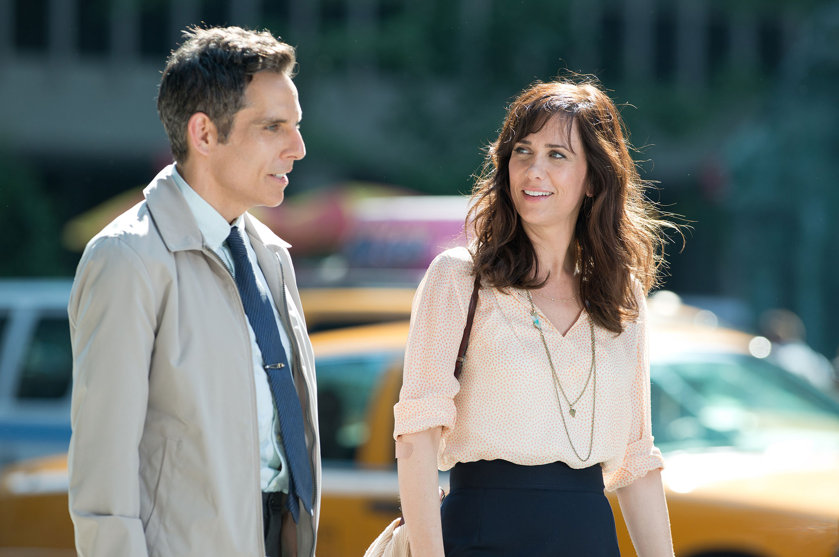 Sometimes the line between reality and fantasy is blurred. In the moment, daydreams can feel like real life. Such is the existence of Walter Mitty, the milquetoast main character of Thurber’s 1939 New Yorker short story. But this is no remake of Danny Kaye’s 1947 movie.

Walter lives his life at a safe and reasonable distance. A man, ruled by routine. He’s the guy you like but don’t know. Smile at but never stop to talk to. Walter is alone in a room full of people.There is one bright spot in Walter’s life: a woman who stops to notice. Don’t let Walter fool you. His life seems small, but his imagination is grand. In his daydreams, Walter is heroic, brave and always gets the girl.

Walter is a quiet, photo lab geek at Life magazine, the long time publication that is closing its doors. Of course, in real life, those doors closed years ago, but the magazine name makes for the perfect contradiction to Mitty’s existence. The transition team is in place led by the snide, bearded corporate presence of Ted Hendricks (Adam Scott). Photographer extraordinaire Sean O’Connell (Sean Penn) has delivered the perfect shot for the final cover. Only one problem: Walter cannot find it. Using the photos before and after the missing Photo 25, Walter pieces them together like a clue to find O’Connell and in the process traveling the world.

This gaffe leads Walter to cross paths with co-worker Cheryl Melhoff (Kristen Wiig), whom he has secretly admired both across the office and by staring at her eHarmony profile. Their investigative work leads Walter on the first real journey of his life. He even breaks free of the family bond of his mom (Shirley MacLaine) and sister (Kathryn Hahn) and gets a pep talk and well timed boost from his eHarmony rep (Patton Oswalt).

Walter’s expedition leads him to Greenland, Iceland, the Himalayas and Afghanistan by way of Yemen. He also encounters a wild helicopter pilot and ride, sharks, an erupting volcano, drinking beer from giant glass boots, a sad and aggressive Karoke singer, and takes a speedy ride via skateboard. Rather than changing Walter, these experiences just bring out a lust for life that was previously only flashed through his periods of fantasy zone outs.

The acting is very strong in this one. Stiller’s beaten down demeanor and stone-faced expressions are spot on for the Mitty role. MacLaine, Hahn, Oswalt and Scott all add very nice comedic touches and Penn captures the rugged fearlessness of a world weary photographer who recognizes the depth of Mitty. If you are a fan of Thurber’s short story then you must know artistic license is taken to turn it in to full length feature. Screenwriter Steven Conrad provides Life magazine as a foundation, and some of the most beautiful places on earth during the journey. Cinematographer Stuart Dryburgh delivers these locations to us in stunning fashion. The movie is beautiful to look, and thanks to the score from Theodore Shapiro, it’s complimented by well fitting music. Rated PG. Opens Dec. 25, 2013.