Inside Llweyn Davis follows a week in the life of a young folk singer as he navigates the Greenwich Village folk scene of 1961. Llewyn Davis is at a crossroads. Guitar in tow, huddled against the unforgiving New York winter, he is struggling to make it as a musician against seemingly insurmountable obstacles — some of them of his own making. Living at the mercy of both friends and strangers, scaring up what work he can find, Llewyn’s misadventures take him from the baskethouses of the Village to an empty Chicago club — on an odyssey to audition for a music mogul — and back again. 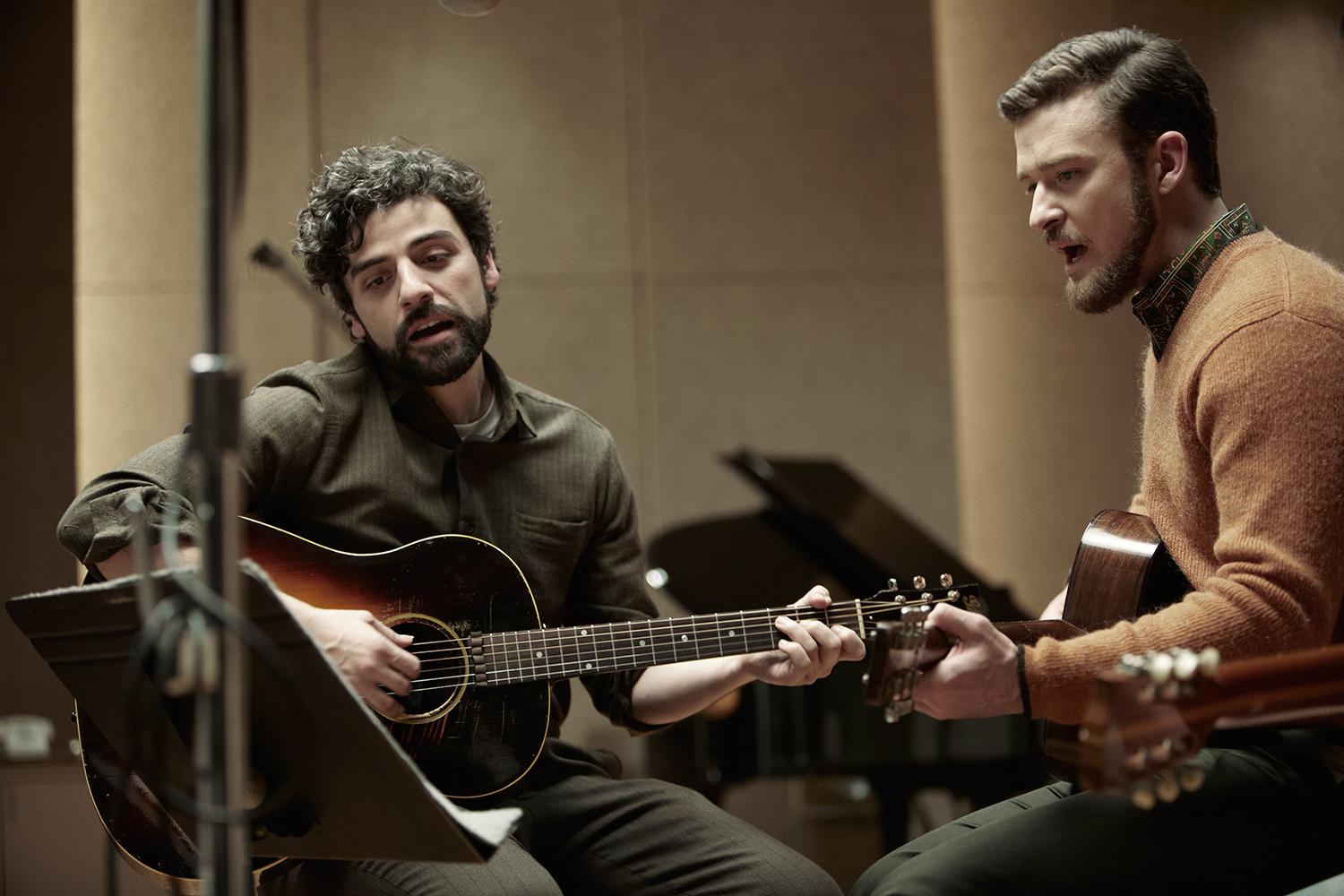 To an extent, Inside Llewyn Davis is the Coen Brothers in O Brother, Where Art Thou? mode, but the display of hatred of the human species makes this more of a spiritual cousin to their 2009 comedy A Serious Man.

The movie is the portrait of a man in despair. The setting is the folk music scene of the early 1960s in Greenwich Village. The period right before Bob Dylan hit it big and changed things forever. Llewyn (pronounced Loo-Win) Davis (Oscar Isaac)was half of the folk duo Timlin & Davis. But his singing partner, Mike Timlin, committed suicide by jumping off the George Washington Bridge. Llewyn is clearly grieving the loss of his friend, but he’s got a lot of other reasons why he’s unhappy too.

Llewyen is a skillful performer whose solo career is an epic fail. He’s down and out with no permanent address. He couch surfs. Llewyn has no home, drifting from gig to gig and crashing on couch after couch. Llewyn is at turns a noble soul who exists for the sake of making the music he wants to make and a resentful twerp who mooches off friends just to sustain his unsustainable lifestyle.

To say that Llewyen is a bit insufferable is an understatement. Some Upper West Side types give him a solid meal and provide a place to stay. However when they ask if he’ll grace them with a song, he screams at them “I’m not a trained poodle!!” His talent remains impressive, but his personality is not. The movie starts with him getting beaten up in an alley by a patron. It isn’t until the end that we find out why. Llewyn is a first-class performer, but he’s also a first-class jerk.

During his travels and travails, Llewyn encounters people ranging from the genuine (his singing friends Jim and Jean, played by Justin Timberlake and Carey Mulligan) to the absurd (a rotund, blustery John Goodman). And a cat that travels with Llewyn — at least until he can get him or her back to the owner. Part of the humor is that Llewyn sees himself as the real deal while everyone else are pretenders. Yet to his bewilderment, they are all more successful. They’re all just simply existing while he’s living. Jim gets him a job playing session guitar on a song that he wrote Please, Mr. Kennedy. “Hey look, I’m happy for the gig, but who wrote this?“ Llewyn sincerely asks unaware. It’s implied he thinks Jim is just a novelty-song-writing hack.

Ever wonder why someone with a lot of ability never becomes a star? Inside Llewyn Davis doesn’t answer that question, but it does reflect upon it. The movie is the meandering tale of an unpleasant man with a lot of talent.

Inside Llewyn Davis is not an easy movie to love. Both Llewyn and Roland Turner (Goodman), a jazz musician Llewyn helps drive from New York City to Chicago — where Llewyn auditions for a gig at the Gate of Horn club, but doesn’t get the job — are both characters you hate. Actually, you feel satisfied that they both get what they deserve in the end. But two things set the production apart. The music is outstanding, especially Hang Me, Oh Hang Me and The Death of Queen Jane. The soundtrack is filled with covers of old folk songs most of which are sung by Isaac, who also plays the guitar. Also, the cinematography is stunning. A great cinematographer can take a really bleak subject and evoke an exquisite mood. Bruno Delbonnel does that. He makes dark smoky nightclubs and cold, bleak winters look positively inviting. But he doesn’t merely create mood, he creates emotion.

I didn’t care for Llewyn as a human being, but it’s not necessary or even required to like him. Throughout it all, he encounters a group of oddball characters that never seem quite as odd as the man himself. And the movie, like Llewyn’s own life, appears to have no point – except to illustrate just how pointless Llewyn is making his life, through his stubborn marriage to his craft and a desire to stay uprooted. Unless you are a fan of the Coen Brothers, your best bet it to see another of the great films out this Christmas season. Rated R. Opens Dec. 20, 2013.