Frozen Will Warm Your Heart

A prophecy traps a kingdom in eternal winter, so Anna, a fearless optimist, sets off on an epic journey — teaming up with rugged mountain man Kristoff and his loyal reindeer Sven — to find her sister Elsa, the Snow Queen whose icy powers have trapped the kingdom of Arendelle in ice and snow. Encountering Everest-like conditions, mystical trolls and a hilarious snowman named Olaf, Anna and Kristoff battle the elements in a race to save the kingdom from destruction. 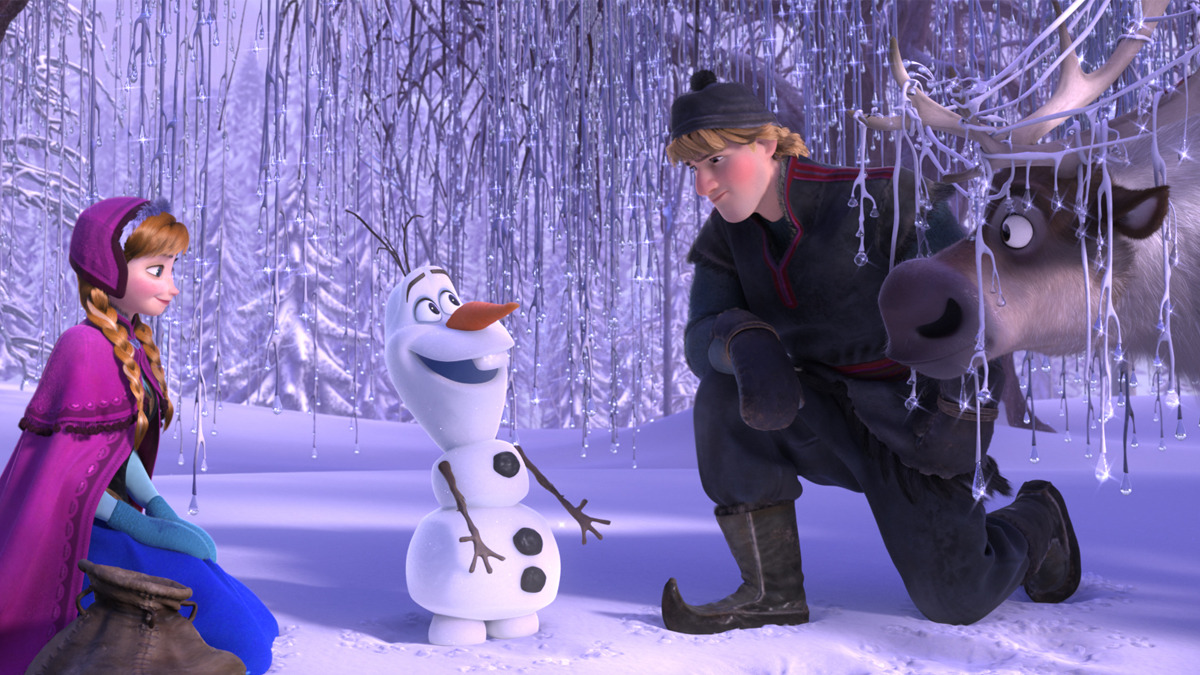 Frozen is the tale of two sisters — the older and brooding blond Elsa (voice of Idina Menzel) and younger redhead Anna (Kristen Bell). From the outside, Elsa looks poised, regal and reserved, but in reality, she lives in fear as she wrestles with a mighty secret — she was born with the power to create ice and snow. It’s a beautiful ability, but also extremely dangerous. Haunted by the moment her magic nearly killed her younger sister, Elsa has isolated herself, spending every waking minute trying to suppress her growing powers.

Raised in the splendid isolation of an enormous castle, they lose their parents to a shipwreck, forcing Elsa to take the throne in her late teens. Long aware that she possesses “dark powers,” Elsa has always heeded the warning not to let them show. But when, during her coronation, she removes the gloves that keep them in check, her capacity for sorcery becomes evident to all.

It’s not evil, but calamity that dooms her small Nordic kingdom of Arendelle to a bleak fate of eternal winter. Wherever she goes, she can’t help but turn everything into snow and ice. Instead of just putting her gloves back on, Queen Elsa embraces her status and runs off to isolation on North Mountain while her subjects shiver back home.

Anna has had her head turned by handsome young Prince Hans (Santino Fontana) but soon departs in pursuit of her older sister. Not exactly cut out for the trek, she soon gains the services of big blond mountain guy Kristoff (Jonathan Groff), his trusty reindeer Sven and, before long, buck-toothed snowman Olaf (Josh Gad).

The duplicitous Hans and a greedy Duke of Weselton (Alan Tudyk) organize their own expedition to turn things in their own mercantile favor via insidious means that trigger a nasty plot twist. The finale delivers large-scale action and some humor.

As an added bonus, Frozen is fronted by one of the wittiest and most inventive animated shorts in a long time, Lauren MacMullan’s Get A Horse!. Horse begins as an early black-and-white Mickey Mouse cartoon but then bursts its boundaries into color and 3D in marvelously antic ways that call to mind the stepping-off-the-screen techniques. It’s a total winner.

Frozen, which will use the Andersen tale’s original title in many countries, was in development for more than a decade, as Disney hoped to strike gold with another Andersen story after the success of The Little Mermaid. Directors Chris Buck (co-director of Tarzan and Surf’s Up) and Jennifer Lee (co-screenwriter of Wreck-It-Ralph, who also wrote this script and is the first female director on an in-house Disney animated feature) do a pretty decent job of hitting the required cues for youngsters’ dream-come-true expectations while also introducing darker tones by way of a mentally tortured youthful queen and a two-faced royal suitor.Visually, it is a pleasure and makes good, unforced use of 3D.Rated PG. Opens Nov. 27, 2013.