Delivery Man is the story of affable underachiever David Wozniak, whose mundane life gets twisted in a knot when he finds out that he fathered 533 children via sperm donations he made 20 years earlier. In debt to the mob, rejected by his pregnant girlfriend, things couldn’t look worse for Wozniak when he’s hit with a lawsuit from 142 of the 533 20-somethings who want to know the identity of the donor. As he struggles to decide whether or not he should reveal his true identity, he embarks on a journey that leads him to discover not only his true self but the father he could become as well. 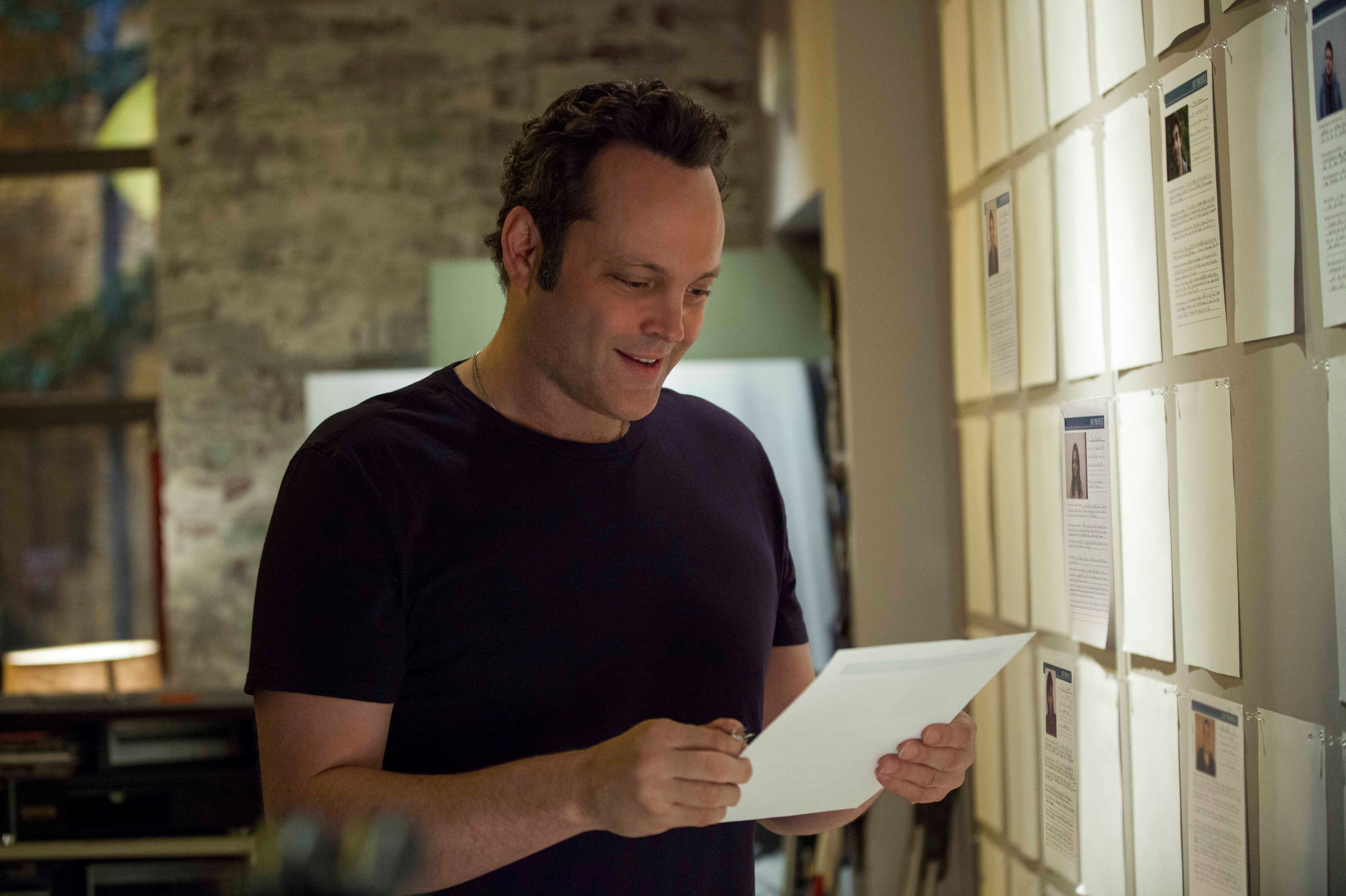 David Wozniak (Vince Vaughn) looks at profiles of some of the 533 kids he has sired. (Photo: Dreamworks Pictures)

Delivery Man is a feel-good comedy based on the 2011 French-Canadian film Starbuck, which refers to a Canadian Holstein bull who produced hundreds of thousands of progeny by artificial insemination in the 1980s and 1990s. Vince Vaughn is David Wozniak, a delivery man for his family’s Brooklyn butchering business. He owes $80,000 to the mob, is growing hydroponic marijuana in his apartment to pay is debt and has gotten his police officer girlfriend Emma (How I Met Your Mother’s Cobie Smoulders) pregnant.

As the film opens, David is a man under siege. He’s the family’s favorite whipping boy, disappointing dad (Polish actor Andrzej Blumenfeld) and his two younger brothers, Victor (Simon Delaney) and Aleksy (Saturday Night Live’s Bobby Moynihan) on a daily basis. Still they adore him. Emma announces she’s pregnant when he shows up at her front door after being missing for a while. A by-the-book New York City cop, she essentially puts him on fatherhood probation.

When he was in his 20s, David donated sperm at a fertility clinic extensively and effectively — under the name “Starbuck.” However, due to a mistake his sperm was used to inseminate all the women over a year.

When David’s served with a class-action suit to unmask Starbuck’s identity, it comes with a packet filled with 142 pages — the faces and profiles of the children who want to meet him. David’s best friend Brett (Parks and Recreation’s Chris Pratt), an overwhelmed father of four and an under qualified attorney, takes his friend’s case and issues a warning to never look inside. But like Pandora’s box, the urge is impossible to resist, the result impossible to contain.

As so often happens in the real world, having kids forces even the most reluctant to grow up, David included. When he starts showing up in a few of the kids’ lives — still anonymous — so does a sense of responsibility. They come in all colors. Some are gay. One is disabled. All have issues. Stereotypes abound.

A few of them are singled out for the purpose of putting David through the parenting ringer. The most skillfully drawn are Britt Robertson’s young woman on the edge, Dave Patten’s struggling street musician, Sébastien René’s silent wheelchair-using teen and Adam Chanler-Berat’s needy goth, who actually moves in and proceeds to drive David crazy with existential debates.

The film shifts frequently between David’s very traditional, tight-knit Polish family, the nontraditional one that is forming around the donor kids and his future family with Emma.

But writer-director Ken Scott (who also directed and co-wrote Starbuck builds a complex character with a series of emotional arcs designed to force the David’s man-child to grow up.

Delivery Man is not just about children searching for a father, but a father searching for the meaning of fatherhood. It’s especially lovely to see David interact, silently, with his profoundly disabled son. The wordless performance by Rene, who played that character in both movies, is a guaranteed tearjerker. Let’s just say, whatever your mood going in, you will likely feel a good deal better coming out. Rated PG-13. Opens Nov. 22, 2013.