Adam Levine is People magazine’s Sexiest Man Alive. The title will be announced next week.

The Maroon 5 singer, The Voice “coach” and budding film actor has been featured in the magazine’s annual celebration of hunk before, but this is his first time winning the top title. It’s a title that’s been bestowed in recent years to Channing Tatum, Bradley Cooper and Ryan Reynolds, actually sparking protests by people with eyes who feel that Ryan Gosling is perennially robbed.

Levine recently got engaged to Victoria’s Secret model Behati Prinsloo, has been in the “Sexiest Man Alive” issue before but never as the top choice.

He was asked about the rumors on Friday’s Today show but was reluctant to say anything and squirmed as he was being questioned. After initially telling host Savannah Guthrie he didn’t believe her, he remarked, “It would be an interesting idea … I know nothing.” 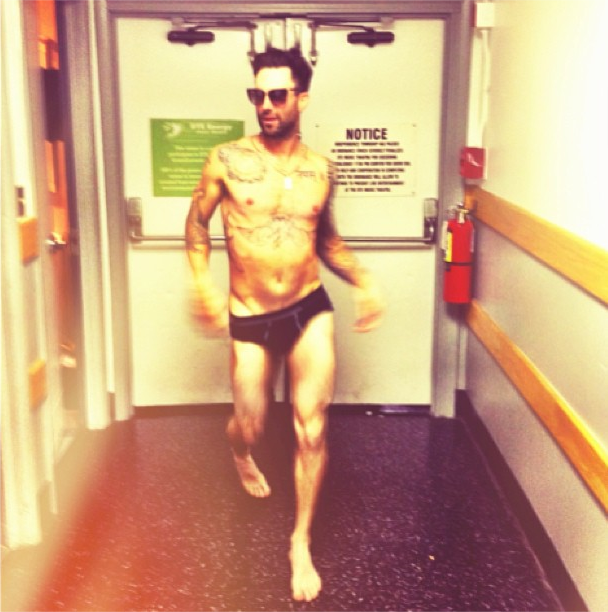 Girlfriend Behati Prinsloo posted this photo of Levine in his underwear on her Instagram account. (Photo:Behati Prinsloo/Instagram)

In addition to his music career, Levine has branched out into acting, with roles in American Horror Story and Can a Song Save Your Life? He’s also launched fashion and fragrance lines. Last May, he inked a one-year first-look development deal with NBC, and the network subsequently picked up a script for a semi-autobiographical comedy based on his friendship with writer-producer Gene Hong (Community), whom he roomed with before either found success.

Gossip Cop was first to report that Levine would be People’s choice.