Last Vegas Is a Geriatric Hangover

Billy, Paddy, Archie and Sam have been best friends since childhood. So when Billy, the group’s sworn bachelor, finally proposes to his 30-something girlfriend, the four head to Las Vegas with a plan to stop acting their age and relive their glory days. However, the four quickly realize that the decades have transformed Sin City and tested their friendship in ways they never imagined. The Rat Pack may have once played the Sands and Cirque du Soleil may now rule the Strip, but it’s these four who are taking over Vegas. 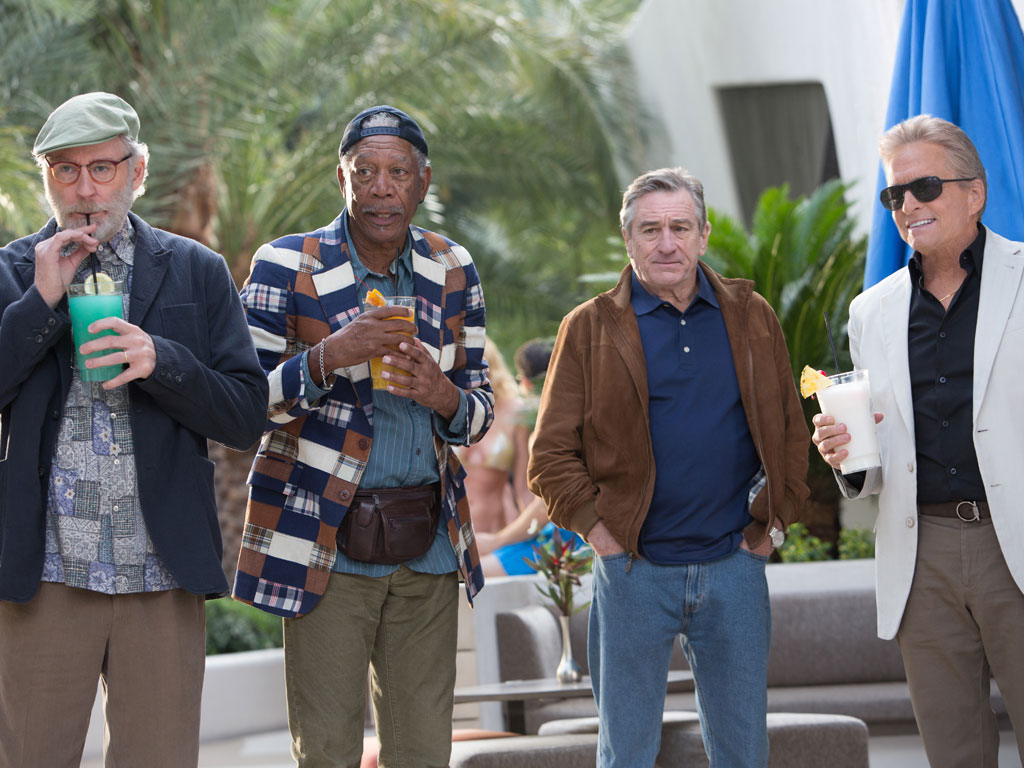 Michael Douglas, Morgan Freeman, Robert DeNiro and Kevin Kline star as four childhood buddies from Flatbush, N.Y., who grew up together in the 50s and now find themselves decades later heading to Vegas for some bachelor party fun.

Last Vegas reunites the best friends since growing up together in Brooklyn for Han Malibu playboy Billy’s (Douglas) bachelor party for his impending marriage to his 30-something girlfriend (Bre Blair).

That rouses interest from Sam (Kline), who’s terminally bored at a Florida retirement community and encouraged to reawaken his libido by his supportive spouse (Joanna Gleason); Archie (Freeman) who, recovering from a stroke, is being held under constant surveillance by his overly-protective son (Michael Ealy); and grieving widower Paddy (DeNiro), who refuses to leave his New York apartment and holds a grudge against Billy, who didn’t attend Paddy’s wife’s funeral.

In Sin City, the geezer quartet gloms onto Diana (Mary Steenburgen), a charmingly sassy lawyer-turned-lounge singer who’s searching for life’s second act. Forced to spend time in the casino until they can get rooms, Sam befriends a drag queen (Roger Bart), while Archie’s blackjack winnings catapult them into a palatial penthouse suite that’s suddenly available now that 50 Cent has cancelled his weekend reservation. That becomes the site for one of the wildest parties Vegas has ever seen and a place for the foursome to work out their emotional issues.

It’s chock full of good-humored one-liners – like when Archie tries Red Bull vodka, describing it as “getting drunk and electrocuted at the same time” – and they judge a poolside bikini contest.

If you think Last Vegas is merely The Hangover Part 50, you’re partly right. But it would be a mistake to underestimate what a cast with five Oscar winners is able to bring to a script that has a lot more heart than expected lurking beneath its surface. Director Jon Turteltaub (National Treasure) and writer Dan Fogelman (Cars and Crazy, Stupid, Love) aren’t interested in making something edgy or delivering a profound message, but they understand their target audience. Although the plot is nothing new or original, the cast saves the movie and provide plenty of laughs. Rated PG-13. Opens Nov. 1, 2013.