Enough Said Is a Comedic Romance

In Enough Said, divorced single mother Eva (Julia Louis-Dreyfus) spends her days enjoying work as a masseuse, but dreading her daughter going off to college. She meets Albert (James Gandolfini), a sweet, funny and like-minded man also facing an empty nest. As their romance quickly blossoms, Eva befriends Marianne (Catherine Keener), her new massage client. Marianne is a poet who seems “almost perfect” except for one thing: she rags on her ex-husband way too much. Suddenly, Eva finds herself doubting her own relationship with Albert as she learns the truth about Marianne’s ex. 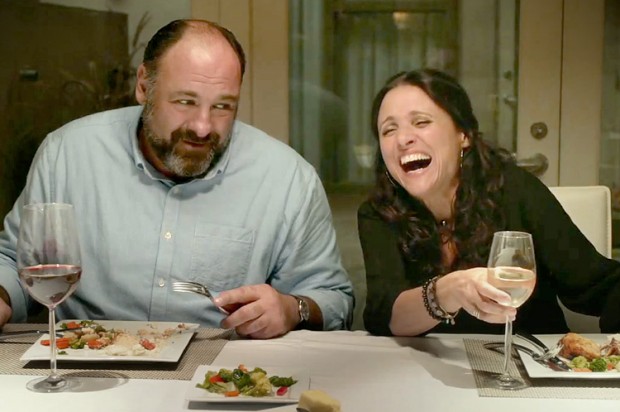 After a near-disastrous first meeting at a cocktail party when both tell their mutual friends that there is no one at the party either is attracted to, frumpy, overweight, academic Albert and masseuse Eva, who like Albert is the divorced parent of a daughter about to go off to college, begin dating. They have similar senses of humor, both love their daughters to a flaw and hate their exes. Yet underneath they share mutual anxieties regarding intimacy, independence, fragile self-worth and spreading middle-aged bodies.

It is possible to sympathize with Eva and also to marvel at her curious sense of timing. Happily — or at least not miserably — divorced, with nice friends and a gratifyingly non-dysfunctional teenage daughter, Eva uses her sense of humor as a social tool and an emotional defense. She’s a good sport, a designated joker, which is fine except that it means that she never has to be taken seriously, even by herself.

“I’m tired of being funny,” says Eva as she rolls over in the bed she has just shared with Albert for the first time, she senses another possibility. This guy might actually get her, not just her jokes. He agreeably and gallantly says that he’s also tired of being funny. “But you’re not funny,” she says as they snuggle against each other, laughing at her own quick wit and also paying him a sincere, if somewhat backhanded, compliment.

But Enough Said is funny and writer/director Nicole Holofcener keeps the laughs coming. 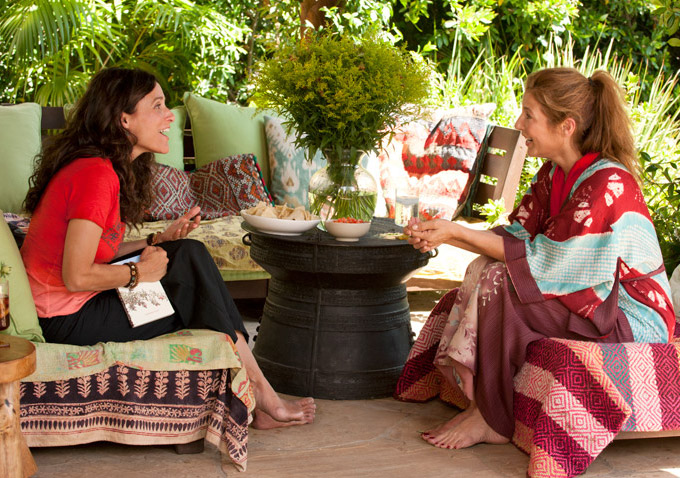 At the same party where the two met, Eva also met New Age, vegan, poet Marianne who becomes a client. One of the movie’s best lines come when the two women first meet and Marianne tells Eva she’s a poet, and Eva retorts, “And I’m a dreamer” before realizing the woman is serious.

During their weekly massage session, Marianne tells Eva about her terrible ex-husband and all of his flaws. After realizing Albert and Marianne’s ex are the same and despite the advice of her friends Sarah (Toni Collette) and Will (Ben Falcone) to drop Marianne as a client, the two women become friends. Partly because she is dazzled by the friendship of someone who writes incomprehensible verse, serves exotic iced tea and hangs out with Joni Mitchell, Eva absorbs Marianne’s perspective and tries, with obnoxious good intentions, to correct Albert’s faults.

What happens when the things that you once found charming start driving you crazy? Many love stories address that question, but Holofcener tilts it a few degrees. Does it matter that the things about Albert that Eva finds charming drive Marianne crazy? Should it? These turn out to be not so trivial questions as Eva struggles to figure out what to do with the Too Much Information that Marianne has unwittingly revealed to her. To Eva, Albert is a sweet, sexy, affable slob, but his ex remembers him as a bore and a loser, clumsy in bed and incapable of taking care of himself.

Enough Said will make you laugh and leave you in tears. Forget the Tony Soprano you remember. Gandolfini, who died over the summer, plays his next-to-last role with sensitivity and vulnerability. (His final role will be next year’s Animal Rescue.) A bearded, sweet-natured butterball of emotional need, he both absorbs and deflects Eva’s spikier energy, which Louis-Dreyfus softens considerably by way of self-deprecating wit and her preternaturally expressive face.

At its best, Enough Said captures middle-age romance — its rhythms and repartee, its cautious hopes and incipient misgivings — in a way that’s never forced, even when the film’s central plot twist comes fully into play. It gets to the heart of human nature: in this case, the lengths people go to in order to fill their empty spaces, and how lovable foibles become intolerable flaws. This is one of the best, if not THE best, film of the year so far. Rated PG-13. Opens Sept. 18, 2013 in limited release. Sept. 27, 2013 nationwide.