In Insidious: Chapter 2 director James Wan and writer Leigh Whannell reunite with the original cast of Patrick Wilson, Rose Byrne, Lin Shaye, Barbara Hershey and Ty Simpkins in a sequel to the 2010 horror film, which follows the haunted Lambert family as they seek to uncover the mysterious childhood secret that has left them dangerously connected to the spirit world. 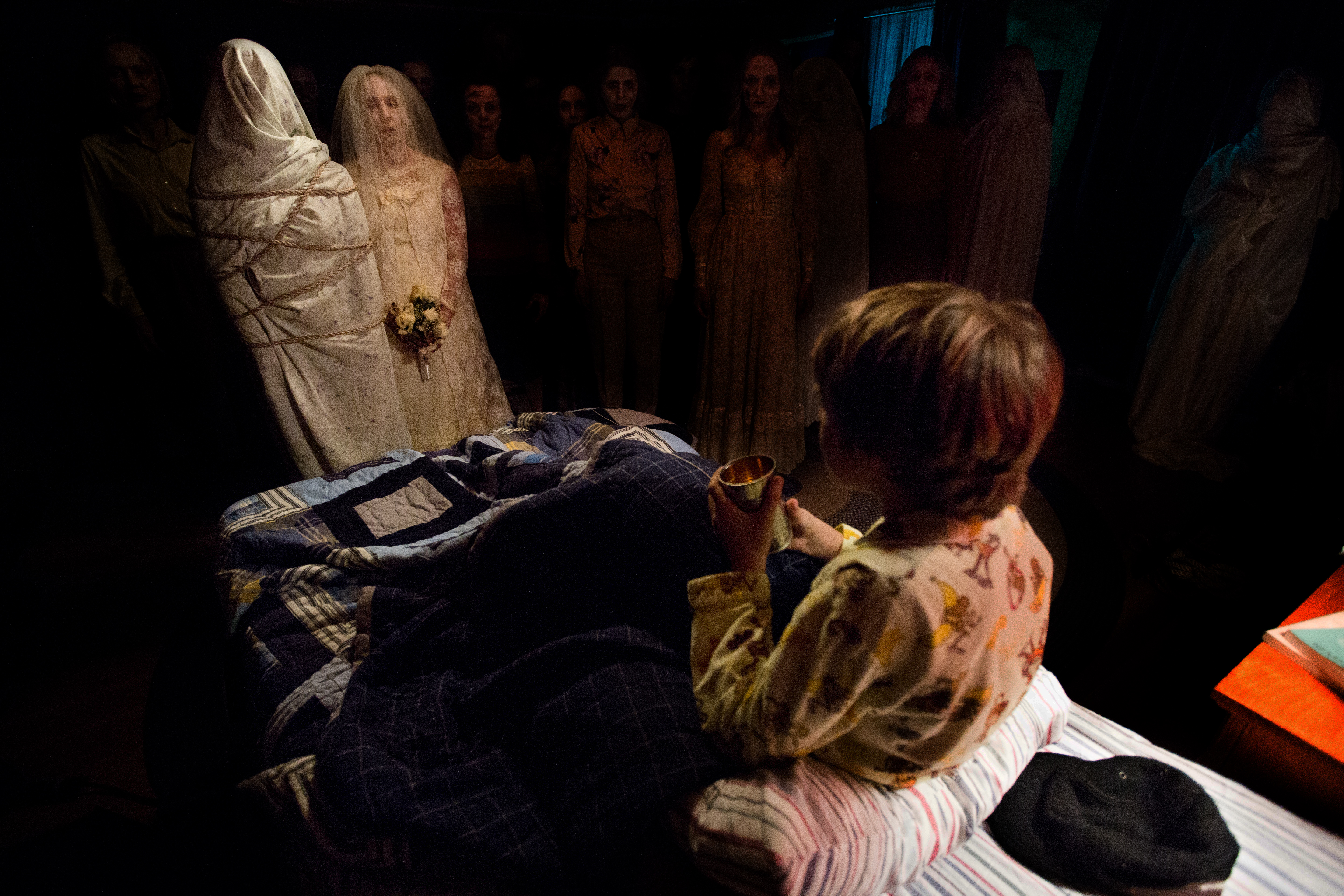 Dalton Lambert is visited by the spirits of murdered brides. (Photo: Matt Kennedy/FilmDistrict)

After a prologue that takes us back to 1986 and shows Josh as a young boy tormented by a female spirit — just as son Dalton (Simpkins) has recently been — but being freed from her control through hypnosis at the hands of young medium Elise Rainier (Lindsay Seim). Then the script switches to the immediate aftermath of the original movie.

Dalton has been rescued from the dark “Further,” but the older Elise (Shaye) was strangled to death by Josh and the real Josh is trapped in the “Further” with a demonic creature possessing his body. Josh’s wife, Renai (Byrne), knows something isn’t right but it’s Josh’s mom, Lorraine (Hershey), who sifts through the past and figures out what’s happening after the family moves in with her.

Of course, since we know from the original that is Josh and not the house that is haunted, the spirits including a ghostly woman (Danielle Bisutti) move with the family. That leads to a call to the late Elise’s assistants, Specs (Leigh Whannell) and Tucker (Angus Sampson) who bring in Elise’s old assistant Carl (Steve Coulter), who worked with her on Josh’s case as a young man (Hank Harris).

Carl contacts Elise to lead them to the abandoned house of the late Parker Crane (Tom Fitzpatrick), who, while on his deathbed in a hospital where Lorraine worked terrorized young Josh. It turns out that Crane’s mother had wanted a daughter and made Parker dress and act the part. He also had a part in a murder spree years ago, which turns out to be the key to Dalton’s haunting.

Solving this requires more episodes of possession of the living by the dead, chases and assaults, the reappearance of Elise’s soul and the emergence of a group of murdered brides. With each twist, the plot grows more convoluted and absurd.

Nothing in Insidious: Chapter 2 delivers the jolts that the first or Wan’s summer release The Conjuring did. Unfortunately horror sequels aren’t usually very good — like Exorcist 2: The Heretic or Look What’s Happened to Rosemary’s Baby — they don’t have much new material. Wan doesn’t have to tell us “It’s not the house. It’s Josh.” We already knew that. Rated PG-13. Opens Sept. 13, 2013.