DC on Heels will be at a private sneak peek of the restaurant on Sept. 18. 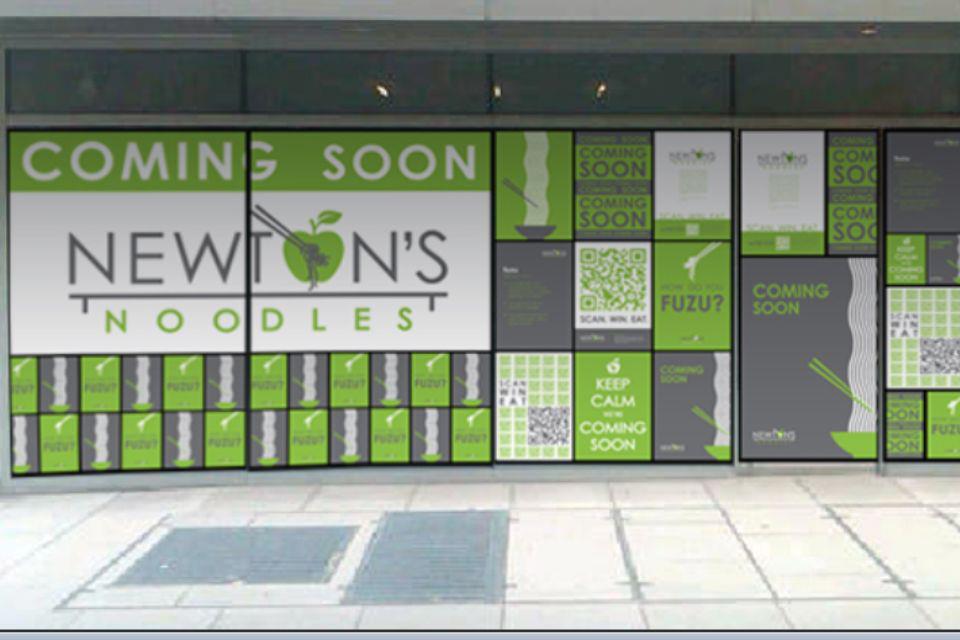 The made-to-order dishes use all-natural, locally-sourced ingredients prepared in three minutes or less. Side dishes include beef wontons, kapow chicken, duck confit spring rolls, nigella tuna bites and soba noodle salad topped with ceviche are available in appetizer, entree or family-size. The utensils will be “chorks” — a fork that splits into chopsticks.

Co-owners Jackie Greenbaum and Gordon Banks, who also own El Chucho in Columbia Heights, opened Bar Charley at 1825 18th St. NW on Sept. 5 with “a casual but upscale” food and drinks menu. The 1,500-square-foot bar and restaurant opened in the former Cajun Experience space. Greenbaum also owns Jackie’s and Sidebar in Silver Spring. 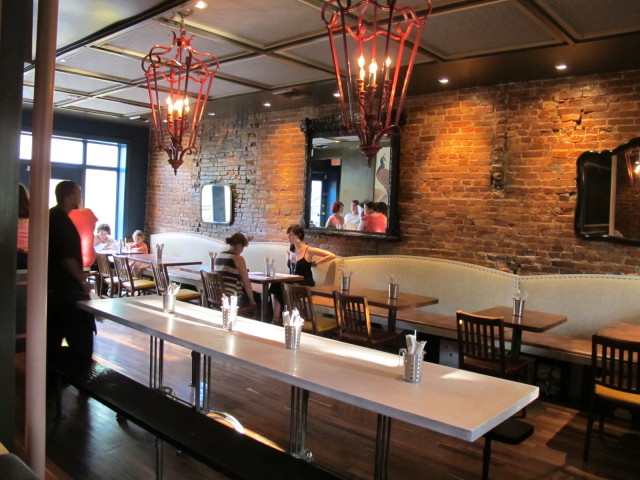 The former row house turned restaurant (now painted blue) has exposed brick walls, Asian-influenced artwork, bright blues and reds with mirror accents. The bar has hardwood floors, comfortable booths and a big bay window area, along with that brick-floored patio. There is no sign yet.

The menu, created by former Jackie’s chef Diana Davila-Boldin who recently left for Chicago and executed by chef LaMont Mitchell formerly sous chef at Redwood in Bethesda, is a hodgepodge of items the owners enjoy. Small plates include lobster roll, bison sloppy joe, salt cod and spaghetti, smoked chicken thighs on dirty rice, shrimp and pork belly dumplings, papri chaat, frankfurters with warm potato salad and sautéed gnudi that range in price from $6 to $14. Exceptions include a wood-grilled steak and a whole roasted fish, which are priced and portioned for two. The only dessert will be pie in different flavors.

The bar features classic cocktails, tiki drinks and some unique offerings ranging from $7 to $12. Featured drinks include the Stepdad, a Rickey with carbonated gin, a “perfect” Manhattan and an Orange Crush served in a plastic cup. There is also a pickleback, which includes a shot glass made out of gelled house-made pickle brine, filled with a shot of whiskey. You take the shot, then eat the “glass.” It likely won’t be on the menu, Banks said people will just have to ask for it. About 20 wines by the glass will be on the menu along with a raft of beers.

Bar Charley opens Monday through Friday at 4:30 p.m. When brunch debuts in a few weeks, the restaurant will open at 10 a.m. on Saturday and Sunday.

Shake Shack has plans to open two more outlets, this time in Union Station and Tysons Corner. Both are slated to open in mid-2014 according to a press release. 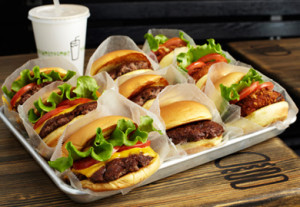 Shake Shack will be serving burgers and shakes in Union Station and Tyson’s Corner next year. (Photo: Shake Shack)

The restaurant in Union Station location will be in the West Hall. The Tysons Corner restaurant will be a stand-alone building on an elevated plaza with “lush green space and gardens” next to the Tysons Corner Center along the Beltway.

“Both of these spots are a natural fit for us,” said CEO Randy Garutti. “Being in Union Station places us in a truly historic building that’s also a central transportation hub for D.C. locals and visitors. Tysons Corner takes us beyond D.C. to an ever-expanding, thriving community in Northern Virginia, where we can build a Shack from the ground up.”

The New York-based burger chain also has local spots in Dupont Circle, Nationals Park and its most recent city location in Penn Quarter.

Toki Underground and Maketto chef/owner Erik Bruner-Yang pleaded guilty to simple assault on Aug. 8 following an attack on his ex-girlfriend’s fiance in June. 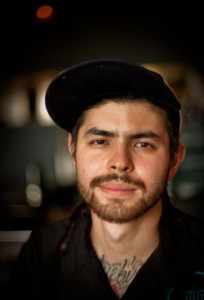 Bruner-Yang signed a deferred-sentencing agreement agreeing to enroll in alcohol/drug treatment and anger management as well as perform 20 hours of community service. He is also required to stay away from the victims. If he violates the terms of the agreement, or breaks any laws, he would face jail time.

Seda Nak, Bruner-Yang’s wife who was also involved, pleaded guilty to simple assault and unlawful entry. She signed a deferred-sentencing agreement with the same conditions.

According to court documents, Bruner-Yang and Nak showed up at the home of Bruner-Yang’s ex-girlfriend and her fiance at 6:45 a.m. on June 26. The ex-girlfriend, who answered door, told police that Nak started yelling, “What do you want to say now? What do you want to say now?” and then rushed into the house. When her fiance came downstairs, he shoved Nak out of the house.

Nak kept kicking the door, according to the documents, and Bruner-Yang reportedly yelled, “I’ll kill you.” The fiance then went outside to ask Bruner-Yang and Nak to leave, at which point Bruner-Yang and Nak assaulted him. Documents said Bruner Yang threw a punch and tried to choke the victim, while Nak punched and kicked the victim once he was on the ground.

Bruner-Yang’s ex-girlfriend believed Bruner-Yang and his wife came to the house over a Facebook post that she made in reference to their wedding, court documents said.

Bruner-Yang is operating a “residency” and test kitchen for Maketto at Hanoi House. Maketto is scheduled to open at 1351 H St. NE later this fall.