J&G Steakhouse to Reopen This Month

J&G Steakhouse, 515 15th Street NW, closed Aug. 4 to get a facelift. It will reopen this month with a more playful, energetic and approachable vibe. The re-invented “urban steak environment” will provide a distinct differentiation between the more traditional steakhouse model. The most significant addition will be a new bar focusing on the martini-culture. 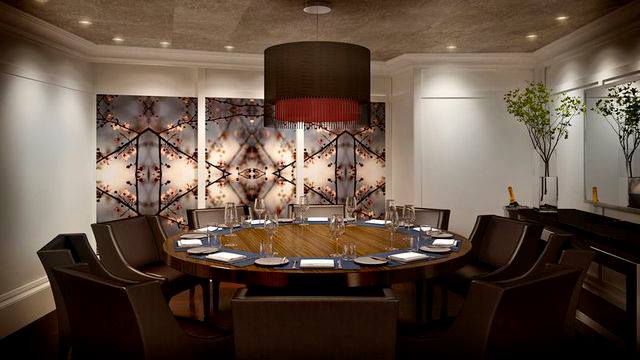 Leading the change is new general manager John Leinhardt, who came from the Mirage Hotel in Las Vegas. He previously worked at 2941 Restaurant as well as The Inn at Little Washington.

The addition of a new upstairs bar called Bar 515 will work in tandem with the remodeled bar space downstairs. The martini-focused cocktail menu, bar food menu and shift in environment will allow both spaces to promote a more social, energetic and approachable experience. The addition of the bar upstairs will also open the space downstairs for more private events. The bites menu will offer Maryland crab fritters with tartar sauce, a steak tartar slider with shoestring potatoes and a Kobe beef hotdog with caramelized onions. Classic martinis, 515 Manhattan and new mixes will be on the cocktail menu.

Chef Philippe Reininger, who opened the restaurant for Jean-Georges Vongerichten in 2009, will offer some new items on the menu when the renovation previews in mid-September with a continuation of sophisticated steakhouse classics, fresh seafood and locally sourced ingredients.

New York based Elemental Interiors is designing the new look. The soaring space will include giant hanging lanterns, darker walls, more banquettes and an abstract photo of the Capitol dome where fabric art once hung. Bar 515 will feature six stools and a communal high-top table on the ground floor. The restaurant’s two private dining rooms will also receive a refresh with additional amenities for private business meetings.

Red Rocks Neapolitan Bistro (formerly Red Rocks Pizzaria), which opened its first restaurant in Columbia Heights in 2007, is having the grand opening of its fourth restaurant on H Street NE Wednesday (although it officially opened Aug. 28). 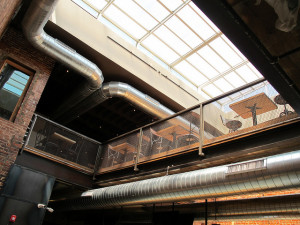 The three-story restaurant at 1348 H St. NE will join the original as well as those in Old Town and Arlington. The newest features a retractable roof, suspended “catwalk” and an indoor-outdoor rooftop bar. The retractable glass roof creates a greenhouse-like atmosphere on the top floor, warming the room on sunny days. It can be retracted to make a patio in the warmer months. Also, seating is available on the catwalk walkway suspended over the main floor. The interior features exposed brick, high ceilings and natural light. There is also a large private dining room with a full bar and additional pizza oven.

The building had been empty since the 1960s. Prior to that, it had been a print shop.

In addition to its Neapolitan pizza made in a brick oven, the menu will include fresh pastas and small plates, like deep-fried risotto croquettes. There will be happy hour specials and a late night menu. Twenty beers will be on tap including some from DC Brau and Port City Brewery and feature two bars inside in addition to the one on the rooftop.

The restaurant is the local chain’s largest to date and will become its flagship. It is also where executive chef Angel Mendoza will be. Lunch and dinner will be served daily and brunch with bottomless mimosas on weekends. It will be open until 3 a.m. on weekends. 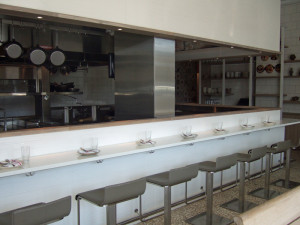 The inside of the newly remodeled 135-seat restaurant is modern and includes a large open kitchen featuring a custom Jade cooking suite, a quartz kitchen counter, tumbled marble floors and a dining room with oversized bay windows and custom crafted bench seating. There is a large rectangular bar, wide-plank neutral oak flooring, crisp white walls, oversized leather booths and a large, bordered, adjoining patio. One wall is filled with tchotchkes.

Located at the corner of 14th and S streets NW, Doi Moi features the regional flavors inspired by the street food of Thailand and Vietnam. Karoum spent about nine days in each country preparing to open the new eatery. The menu is a mix of curries, noodles and skewers including some dishes big enough to share. Dishes range from $7 to $22.

The restaurant’s bar will feature strong Asian flavors including Tamarind. Many of the drinks will have a cooling effect to counter the spicy dishes such as house-made peanut infused bourbon or a cocktail with coconut-infused soda. Cocktails will run about $7 to $14.

A sister cocktail bar, 2 Birds 1 Stone, is located in the basement. It is named after a mural on one wall of two birds getting hit by a skipping stone. The decor features whitewashed walls and stylish, minimal dark leather benches and booths. Seating is about 60. It’s bright and decorated with bird sculptures.

There are six drinks and a punch du jour on the hand-drawn menu. There are also bottled craft beers with only Stillwater Cellar Door on tap along with approachable wines by the glass. Manager Adam Bernbach from Proof and Estadio expects to change two-thirds of the menu every week. 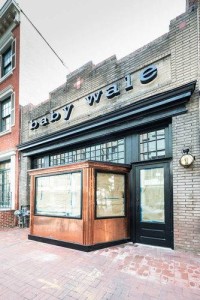 The outside of Baby Wale on 9th Street NW. (Photo: Urban Turf)

Baby Wale restaurant, which opened Aug. 28, is beside chef/owner Tom Power’s Corduroy at 1124 9th St. NW. “Wale” identifies the number of ridges per inch in corduroy. Power wants his new restaurant to be a loosened-up neighborhood place, the relaxed jacket to the suit-and-tie feel of his fine-dining spot next door.

“I wanted to keep it kind of fun and playful,” he says. “Bar food with kind of an upscale twist to it — pupusas, pizzas and hot dogs. Not really so serious.”

A copper bay window is the main feature of the restaurant’s exterior. Inside, there is a distressed look with exposed brick and rough-hewn wood. The dinner plates are enameled metal, and some tables sport colorful ceramic salt shakers shaped like old-time villagers.

The menu includes shisho and Caesar salads, soups, sandwiches and bigger stuff. Prices on the ever-changing menu will be between $10 and $23. 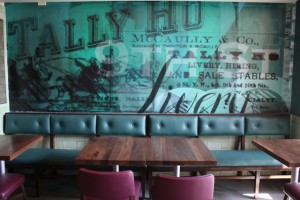 A mural inside Thally by artist Matthew Hlubny. (Photo: Washingtonian)

Thally’s name refers to the Tally-Ho Stables, built in 1883 and once located in Naylor Court ally behind the restaurant’s building. Thally is also the nickname of Outhuok’s daughter Thalia. The decor inside the 70-seat restaurant places an emphasis on the history of the neighborhood with murals of the area by local graphic designer and artist Matthew Hlubny.

The menu is short, but finely crafted by Tanaka and includes artisinal dishes like pan-seared rockfish, roast duck with artichokes and greens, and crab roulette on a bed of cauliflower/tomato salad.

The 14-seat bar serves 24 wines by the glass, with a rotating list that switches out six each week. It will also offer a rotating lineup of draft ciders along with 10 other craft brews on draft, as well as homemade sodas.

Thally is open for dinner from 5-11:30 p.m. Tuesday-Sunday. It is closed Monday. Eventually it will be open on weekends for lunch.