1D: This Is Us Is One Dimensional

One Direction: This Is Us is an intimate all-access look at life on the road for the British boy band. Woven with live concert footage, this film tells the story of Niall Horan, 19, Zayn Malik, 20, Liam Payne, 20, Harry Styles, 19, and Louis Tomlinson’s, 21, meteoric rise to fame, from their humble hometown beginnings and competing on The X Factor, to performing at London’s famed O2 Arena. 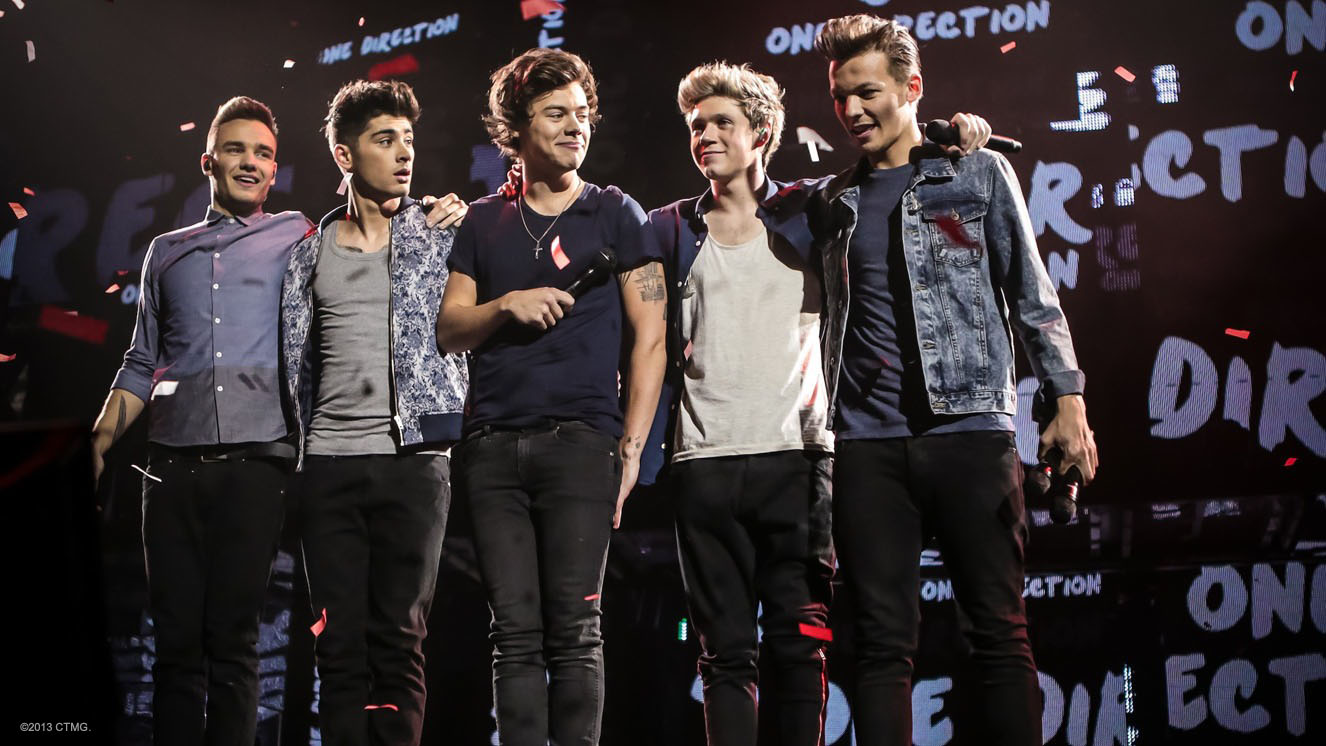 Liam Payne, Zayn Malik, Harry Styles, Niall Horan and Louis Tomlinson (l to r) in One Direction: This Is Us. (Photo: Sony Pictures)

Morgan Suprlock’s 3D documentary One Direction: This Is Us follows the five tattooed lads from the UK from their initial, separate auditions for The X Factor to film producer’s Simon Cowell’s decision to package them as a boy band for the show to their unexplainable appeal the teenage girls who propelled them to the top despite finishing third on X Factor in 2010. The lads didn’t even know each other before Cowell paired them up.

The Brit sensations pride themselves on being, as one member calls them, “a cool boy band” mocking choreographed dance moves and playing a rock-oriented pop over the more typical boy band pop-flavored R&B. They conform to certain personalities, with Styles the pin-up leader, Malik as “the mysterious one” and Horan, Payne and Tomlinson difficult to distinguish for the uninitiated. The lads project a playful, irreverent image, slightly dangerous but safe to bring home to the folks. To paraphrase the 60s girl group the Shangri-Las, they’re good-bad, but they’re not evil. As Payne says, “We’re just five normal lads having the time of our lives.”

Fan adulation put them on tour before they had released any music. And they have been on a worldwide whirlwind of touring, recording and new releases ever since.

The movie steers clear of dealing with the boys’ lives as tabloid stars, with no mention, for example, of Styles’ short, intensely documented romance with musician Taylor Swift. The film’s most honest moments come from time spent with the boys’ parents, as Malik buys his mother a house and Styles’ mother and stepfather marvel at being flown around the world by their son.

On the flip side, other parents speak to feeling that their young sons left one day for an audition and never came back, meaningful moments in their lives together lost in the interim. But the emotional reality of contemporary fame is simply not what This Is Us is about, and so such moments are asides to the film’s breezy camaraderie and flashy concert numbers.

Based on the two biggest releases this holiday weekend — Getaway and One Direction: This Is Us — its probably a better choice to spend the last weekend of summer at the pool or amusement park rather than in a theater unless you’re a tween girl. Then go to the movies to see the lads shirtless and in their boxer briefs. This is more like a glossy promotional piece for the British boy band than a documentary. There’s no real plot or script, just a good soundtrack and backstage access to the boys. But as a manufactured band, this was obviously pre-planned as a moneymaker since the cameras were rolling from the start .

The movie doesn’t have the subversive sensibility and panache Spurlock’s documentaries such as Super Size Me have. He could have done so much more with the behind-the-scenes horseplay of the lads’ adventures on tour. There are holes in the story about five lads who don’t appear to ever drink, smoke, fight, curse or partake in romantic dalliances of any kind. At least, not on screen, although we know differently from their Tweets. Interchangeable somewhat with other recent concert documentaries surveying the likes of Justin Bieber and Katy Perry. At least the boys are more likeable and down-to-earth than Bieber. Rated PG. Opens Aug. 30, 2013.