You’re Next Is Formulaic & Predictable

When the Davison family comes under attack during their parents’ wedding anniversary getaway, a gang of mysterious ax-wielding killers wearing white animal masks the hapless victims seem trapped … until they learn that one of the victims harbors a secret talent for fighting back and proves to be the most talented killer of all. Directed by Adam Wingard and written by Simon Barrett, the movie debuted at the 2011 Toronto International Film Festival Midnight Madness program, but Lionsgate has held wide release until now. 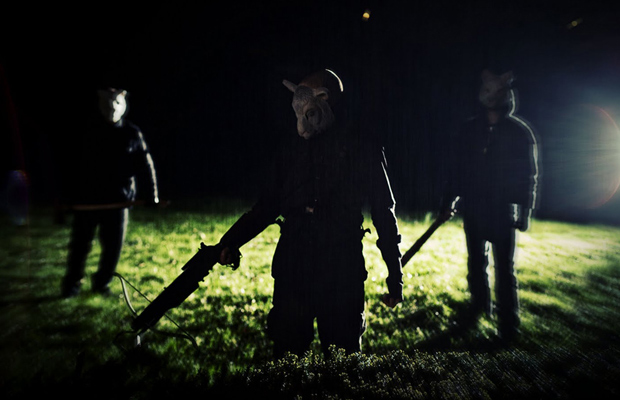 The plot of You’re Next is laughably simple: a wealthy family gathers for a reunion at their isolated vacation home, only to face a handful of masked fiends intent on slaughtering them all.

After a short prologue featuring the demise of a neighbor and his date, it feels like the opening of every horror film with masked killers. The siblings of the wealthy dad Paul Davison (Rob Moran), who recently retired from working for a defense contractor, and mom Aubrey (Barbara Crampton), one of those stereotypical rich-and-bored wives who turn to drugs, though she’s in recovery, meet to celebrate the 35th wedding anniversary of their parents.

It’s been a while since the entire family was together, but it doesn’t take long for the old rivalries to emerge. College professor Crispian Davison (A.J. Bowen) brings his Austrailian girlfriend Erin (Sharni Vinson). His older brother Drake (Joe Swanberg) is a smug jerk with wife Kelly (Margaret Laney) to match. Their sister, Aimee (Amy Seimetz), has a pretentious filmmaker boyfriend Tariq (Ti West) who’s an easy target for dinner-table mockery. The youngest sibling, Felix (Nicholas Tucci), is a screw-up with a sullen girlfriend Zee (Wendy Glenn).

The dysfunctional family gathers at the dinner table, but a sudden arrow to Tariq’s throat makes things interesting, as this family must keep from arguing long enough to hold it together and survive the siege of mysterious intruders. Some do so idiotically, while others have a ridiculous amount of knowledge of what to do in crisis situations. In both cases, things tend to be explained away hilariously in bits of simplistic exposition that you just have to laugh at and take for granted. The group must run the gauntlet of swinging axes, flying arrows and swooping machetes during the home invasion.

Luckily, Erin declares war on the gatecrashers. Lucky for the family, Erin was raised on a survivalist compound and is prepared to give the sadistic killers a run for their money. Vinson, who steals the show and nails some above-average fight scenes, is incredible as she fights back using various homemade weapons. Her character is fun to watch as the unexpectedly indestructible graduate student.

There is also a good deal of edge-of-your seat tension, and some awesome death traps and memorable kills. This is all what one would expect from a decent slasher film. However, it is hard to take anything happening in the movie seriously. The predictability didn’t help, either.

While the animal masks on the killers was a brilliant costume choice, and upped the creepiness and tension, there simply isn’t anything about You’re Next that is memorable. Overall, the movie was just a few sight gags away from straying into campy horror territory.

You’re Next is a clichéd slasher/home invasion flick with underlying sibling rivalry gone bad that relies on formulaic scenarios, where even the twist at the end is predictable. The best thing I can say about the violent indie horror/thriller is that it had a kick-ass heroine and some creepy animal masks. This is a clunker and not worth the ticket price. Save your money. Rated R. Opens , Aug. 23, 2013.