Nestled just around the corner from the historic U Street Corridor, Policy, in the heart of the booming 14th Street corridor at 1904 14th St. NW, is serving up American cuisine infused with international flavors. 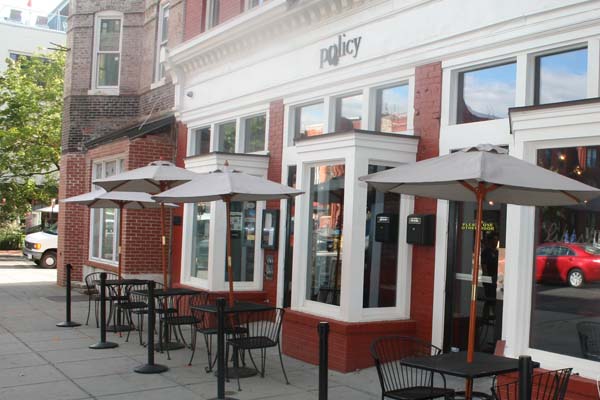 Policy restaurant and bar near 14th and U Streets NW. (Mark Heckathorn/DC on Heels)

Although the brick outside of the restaurant and bar — sandwiched between a building under construction, a Taylor Gourmet, an empty store front, a bake shop and a taqueria — looks something like a cafe, the main dining room downstairs is a swanky, modern, industrial mix of a diner and upscale eatery. The decor is eclectic in red, black and silver, illuminated by modern, silver chandeliers. The walls are covered in two-tone black matte wallpaper decorated with parking meters and fire hydrants. It seats about 70 at the bar and in booths.

Each floor at Policy is totally different. The upstairs Liberty Lounge has a Miami feel and can hold 150 and is used for special events that becomes a night club on weekends. It’s walls are covered in graffiti by local artist Andrew Funk with stylish, has mismatched chandeliers hanging from the high ceilings with skylights and bankettes for seating, a VIP area and a DJ booth along with a bar.

There are also two outside patios — one along 14th Street and another along T Street — and an outside deck upstairs with low seating, low coffee tables and more graffiti. 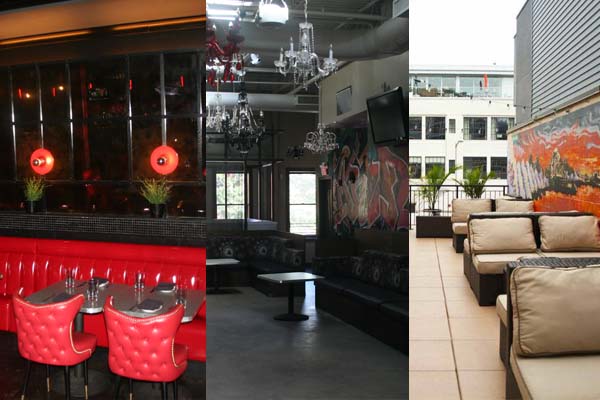 The original chef left about a year and a half ago and now three brothers run the kitchen. The restaurant and bar, which opened in 2009, offers small plates (a little larger than tapas) meant to be shared. It debuted a new menu about a month and a half ago, according to General Manager Tiffany Penn.

“We make all homemade simple syrups (at the bar), we make all our sauces and our meats are cut in house,” Penn said. “Our food is sourced locally in season from farmers’ markets and other suppliers.”

I was joined by a friend and we started with two of Policy’s specialty drinks. My friend had the champagne cup made with prosecco, maraschino liqueur, lemon, mint and berries, while I had the Limey Bastard with Bombay sapphire, house made tonic and key lime juice. Both were strong, but I liked mine better with its slightly sour kick. 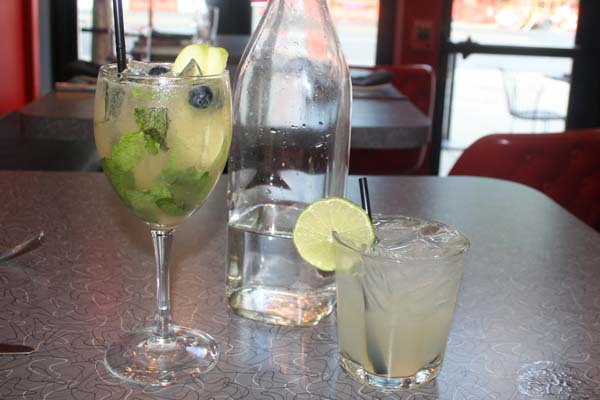 The champagne cup and the Limey Bastard (l to r) at Policy. (Mark Heckathorn/DC on Heels)

On our server’s advice, we started by ordering two starters, two entrees and two sides then added another side and entree later. Ordering starters was the hardest for me. I knew immediately what I wanted to try for an entree and side, but I wanted all the starters. We finally settled on the handcut French fries served with garlic and black truffle mayo and the fried brie and bruleed peach served with mixed greens, watercress, green apples, silvered almonds, balsamic glaze and a house vinaigrette. Both we excellent. I mean who can go wrong with brie breaded with Panko bread crumbs and deep fried? We later tried the warm quinoa with spinach, dates, dried cranberries, Granny Smith apples, cucumbers and a lemon house vinaigrette. Next time, I may just order all the starters for my whole meal. 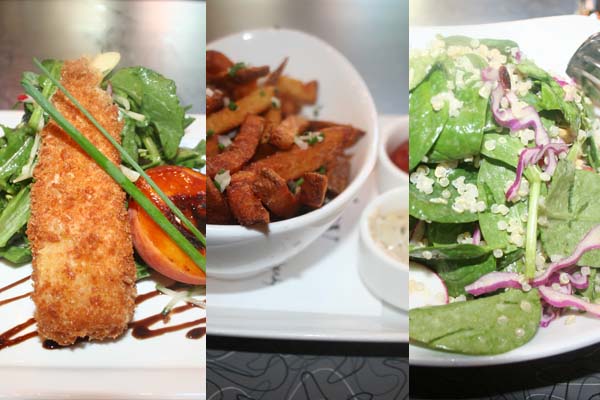 For our sides, we ordered the grilled broccolini (a cross between brocolli and kale) with Policy’s house seasoning, lime and candied citrus and the roasted Brussels sprouts with Applewood smoked bacon, Danish blue cheese and fig vincotto. The broccolini, which you don’t find on many menus, was very tasty and a bit spicy with the Policy seasoning. I was a little disappointed with the Brussels sprouts. I’m a big fan, but I like mine fried and crispy outside, and soft and tender on the outside. Policy’s weren’t crispy and I would have preferred them just sauteed in butter with salt and pepper instead of in the fig vincotto vinegar, which overpowered the Brussels. 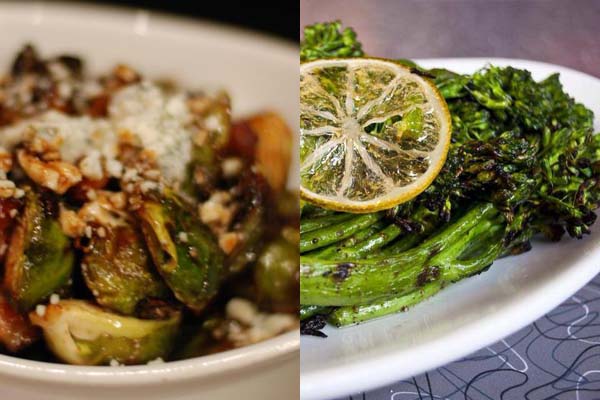 Our entrees included the shrimp and polenta with Tasso ham, triple sec, green onion and rosemary polenta. I was expecting shrimp floating in creamy polenta, but when it arrived the shrimp was on polenta cakes. We also had crab cakes with radish salad, creamy corn cilantro sauce, dried chili sauce, green sauce and jalapeno tartar. We also tried the crispy pork belly, sweet chili glaze, pickled daikon radish and kim chi puree. The pork belly was very tasty and well cooked. I didn’t like the kim chi puree (but I don’t like any kim chi), but my Korean friend said it was good. 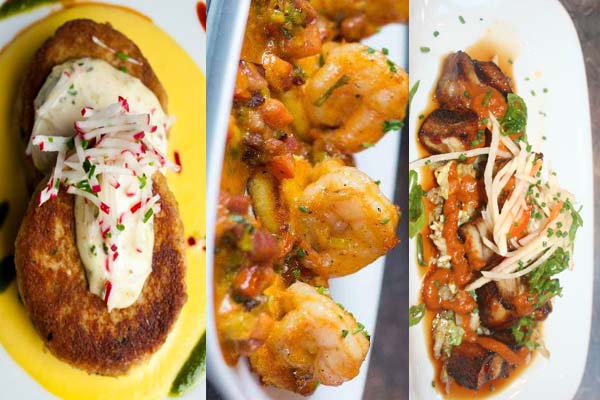 Finally, for dessert we ordered the zeppoles that our server recommended with ricotta cheese and vanilla creme anglaise and mango lime almond cake with lime and mango mousse. The cake was delicious and served on a plate drizzled with a raspberry sauce.

Tasty desserts include the zeppoles and the mango lime almond cake (l to r). (Mark Heckathorn/DC on Heels)

Normally starters and sides range from $6-$10, with entrees from $9-$15 and desserts priced at $7. But, Policy is participating in D.C. Restaurant Week this week with a starter, two entrees and a side or dessert for $35.13. One note, they have a revolving kitchen, which means dishes come out as they are ready and not necessarily starters first, unless you stagger your order.

Editor-in-Chief Mark Heckathorn is a journalist, movie buff and foodie. He oversees DC on Heels editorial operations as well as strategic planning and staff development. Reach him with story ideas or suggestions at dcoheditor (at) gmail (dot) com.
2 Comments