Kick-Ass 2 Falls on Its Ass

Kick-Ass’ insane bravery in the first movie inspires a new wave of self-made masked crusaders. Led by the badass Colonel Stars and Stripes, our hero joins them on patrol in Kick-Ass 2. When these amateur superheroes are hunted down by Red Mist — reborn as The Mother F**ker — only the blade-wielding Hit Girl can prevent their annihilation. When we last saw junior assassin Hit Girl and young vigilante Kick-Ass, they were trying to live as normal teenagers Mindy Macready and Dave Lizewski.

With graduation looming and uncertain what to do, high school senior Dave decides to start the world’s first superhero team with Mindy. Unfortunately, when now-freshmen Mindy is busted for sneaking out as Hit Girl, she’s forced to retire — leaving her to navigate the terrifying world of high-school mean girls. With no one left to turn to, Dave joins forces with Justice Forever, run by a born-again ex-mobster named Colonel Stars and Stripes. Just as they start to make a real difference on the streets, the world’s first super villain, The Mother F**ker, assembles his own evil league and puts a plan in motion to make Kick-Ass and Hit Girl pay for what they did to his dad. 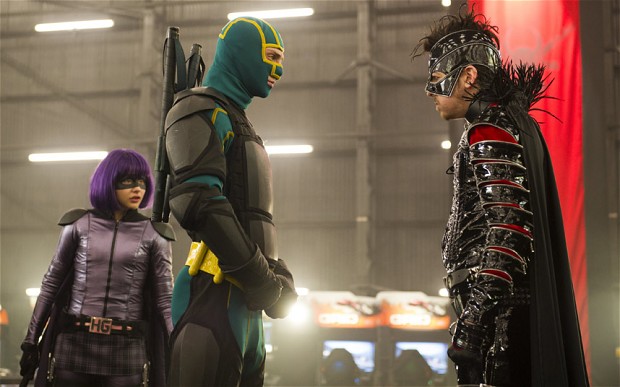 Kick-Ass 2 has to be one of the lamest sequels ever. Everything that was novel and cool about the 2010 adaptation of the Mark Millar/John Romita Jr. misfit-teens superhero spoof has been turned not cool at all. Deploying comic book-like upper-corner panel captions, writer-director Jeff Wadlow lines up the original’s costumed duo — Chloë Grace Moretz’s Hit Girl and Aaron Taylor-Johnson’s baton-slinging Kick-Ass — and sends them packing. Packing heat and packing self-doubts about their place in the high school social waters and the world at large.

In the original, the then 13-year-old Moretz snarled and sneered her way through — hurling nunchakus and profanities. She gives it a shot in Kick-Ass 2, but the joy is gone. Hit Girl’s alter ego, Mindy Macready, has sworn to her NYPD detective foster father (Morris Chestnut who replaces the original Omari Hardwick) that she’ll study, give up crime fighting and stop swearing. Her promises are hard to keep, but finally she forsakes the mask, cape and purple wig and starts hanging with the cheerleader princesses at Millard Fillmore High.

The title character, Kick-Ass/Dave Lizewski (Aaron Taylor-Johnson), is a high school senior. He’s not tough, but he wants to be, and he hopes Hit Girl will give him lessons. But with Hit Girl out of the picture, Kick Ass teams with a band of would-be superheroes — people as powerless as himself who want to make a difference — led by Colonel Stars and Stripes (Jim Carrey). Carrey, who does nice character work as a former mob enforcer who got religion, has since disowned the movie on moral terms because of the violence.

They patrol the city in their homemade getups, gaining the attention of the media and of demonic rich-kid nerd boy Chris D’Amico (Christopher Mintz-Plasse), the superhero wannabe Red Mist from Kick-Ass. The mobster’s son longs to be a tough guy, and in this sequel he takes a sick turn in the aftermath of his father’s death. He decides he wants to become an evil superhero. He devises a costume made up partly of his late mother’s S&M leather gear and transforms himself into supervillain Mother F**ker. The name is perfect for him, exactly what an idiot might think of as cool, but just because Chris really is an idiot doesn’t mean that he isn’t truly, madly and deeply evil. Chris is a lightweight and a joke, and yet he’s dangerous, and he’s genuinely destructive.

Kick-Ass 2 is passable, but is completely missing the spark that made the original work. Cartoonishly violent, with blood spray, vomit spew, severed limbs, impaled torsos and more, Kick-Ass 2 has none of the pluck of the Matthew Vaughn-directed original. The movie begins to sour after the setup, because all of a sudden a film that’s funny in a caustic and outrageous way becomes an action movie that’s nasty in an outrageous and violent way. Somehow laughing one second and cringing the next doesn’t make for a pleasurable experience. Carrey didn’t do press to promote Kick-Ass 2. But in June, he tweeted, “I did Kickass a month b4 Sandy Hook and now in all good conscience I cannot support that level of violence … my apologies to others involve [sic] with the film. I am not ashamed of it but recent events have caused a change in my heart.” Having seen Kick-Ass 2, Carrey made the right decision. Rated R. Opens Aug. 16, 2013.