Bieber Seranades Grandma in the Buff

He’s often seen showing off his torso by going shirtless, especially lately. But on Monday, TMZ published two photos it obtained of the Biebs naked serenading his grandmother last October on Canadian Thanksgiving in Toronto. One photo shows him with only an acoustic guitar hiding his junk. 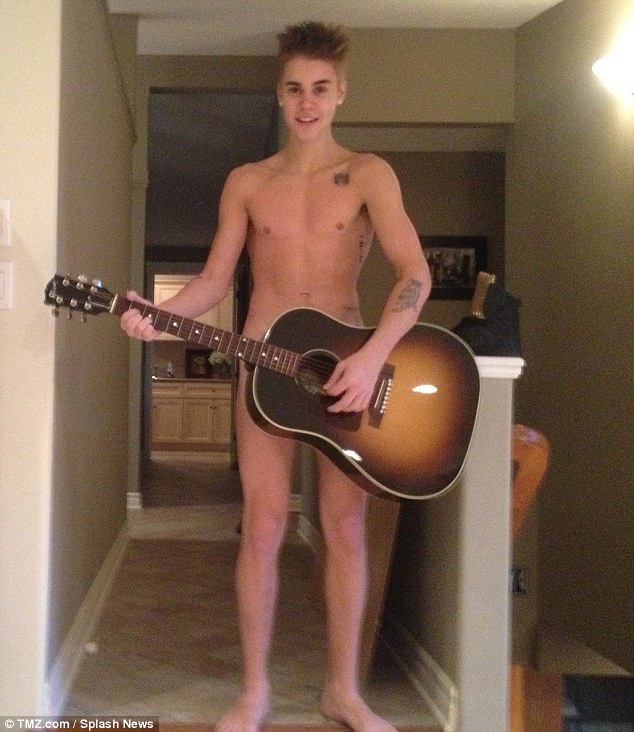 A nude awakening: New pictures have emerged showing Justin Bieber naked and covering his modesty with a guitar during a bizarre Thanksgiving prank. (Photo courtesy TMZ)

TMZ reports that Bieber had been staying at the house of his granny, Diane Dale, during the holiday and slept in a little too late on Thanksgiving morning. The 19-year-old Bieber finally woke up after hearing family and friends stirring around the house — so he thought he’d prank them by grabbing his guitar and playing a naked set a la Jenny from Forrest Gump.

The celebrity gossip site reports the birthday-suited Bieber went right up to his grandma and started belting out some impromptu lyrics like, “I Loooove you grandmaaaa … how are youuuu … helloooo grandma.”

The second photo shows him from behind, his bare butt visible, with Dale looking on. 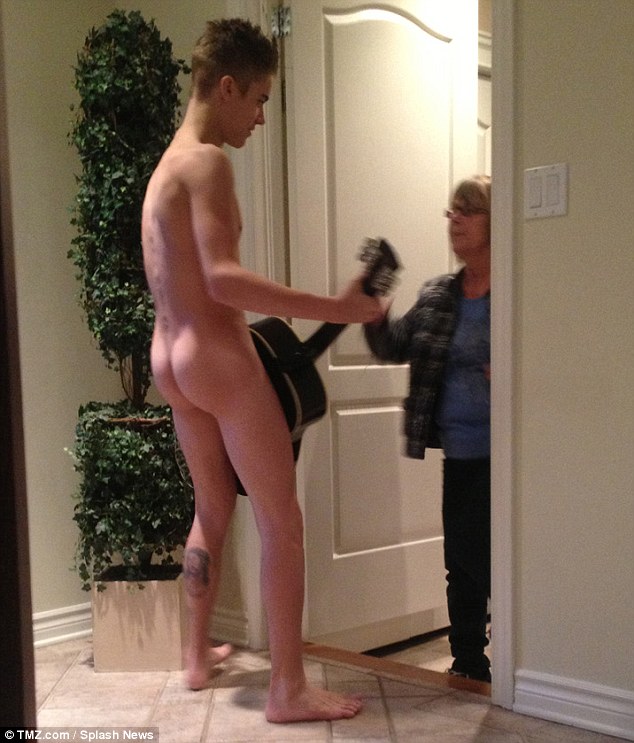 Grandma thought it was pretty funny — and everyone in the home was cracking up — but Dale egged the pop star to get back in his room to put some damn clothes on, TMZ reported. Yet at least one family member was willing to sell the photos to TMZ.

Dale recently defended her grandson in an interview with CTV Ottowa.

Speaking about all the attention Justin’s actions attract, Diane said: “It’s totally crazy. I feel sorry for Justin all the time because paparazzi pick on him all the time. Anybody else’s kids have done the same thing but nobody says anything.”

Justin recently caused controversy again after allegedly getting into a nightclub brawl at a Southhampton, N.Y., nightclub.

Wayne Rennalls, who claims that Justin and his entourage attacked him on Aug. 3, gave a press conference over the weekend, alleging that the pop singer kicked him during the brawl. Footage from the night of the altercation did not show Justin involved in the fight, but Rennalls, 22, claims that Justin did get physical.

He says the fight with Justin and his entourage started after the pop singer became jealous over girls that he wanted to party with.

“Justin Bieber [was] still running his mouth and I took my shirt off to fight,” he said. “That’s when they all hopped out of the truck and bum-rushed me. They said, ‘That’s your f**king ass,’ and the first one came to me, and I put my hands up to fight, to protect myself.”

The alleged brawl comes after a string of incidents where the singer demonstrated “pop brat” behavior.

He has been pictured spitting on fans and urinating in a janitor’s mop bucket in the kitchen of a New York night club.