We’re the Millers Will Keep You Laughing

David Burke is a small-time pot dealer whose clientele includes chefs and soccer moms, but no kids — after all, he has his scruples. So what could go wrong? Plenty. Preferring to keep a low profile for obvious reasons, he learns the hard way that no good deed goes unpunished when he tries to help out some local teens and winds up getting jumped by a trio of gutter punks. Stealing his stash and his cash, they leave him in major debt to his supplier, Brad Gurdlinger.

In order to wipe the slate clean — and maintain a clean bill of health — David must now become a big-time drug smuggler by bringing Brad’s latest shipment in from Mexico. Twisting the arms of his neighbors, cynical stripper Rose O’Reilly and wannabe customer Kenny Rossmore, and the tatted-and-pierced streetwise teen Casey Mathis, he devises a foolproof plan. One fake wife, two pretend kids and a huge, shiny RV later, the “Millers” are headed south of the border for a Fourth of July weekend that is sure to end with a bang. 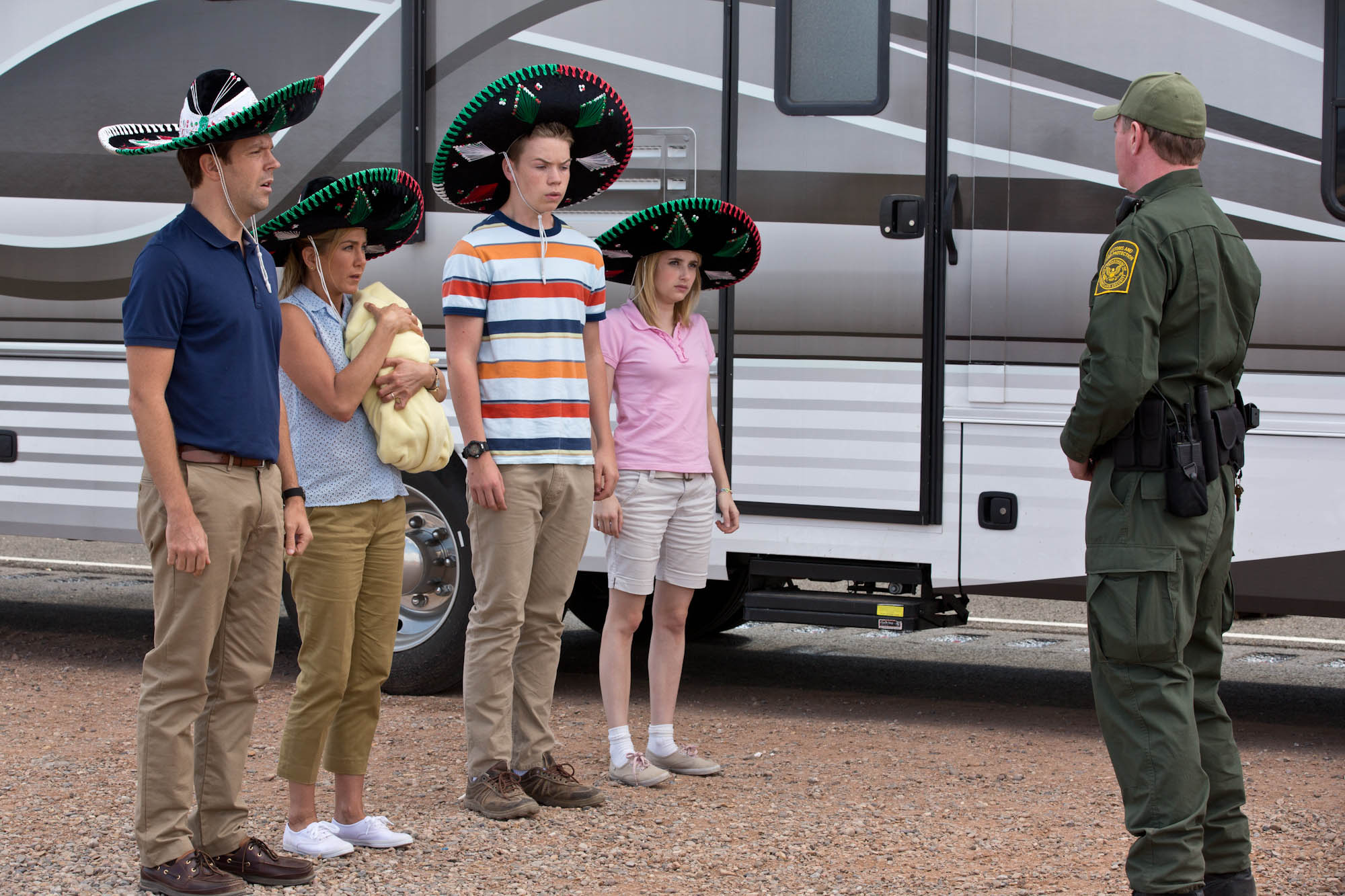 The Millers (Jason Sudekis, Jennifer Aniston, Will Poulter and Emma Roberts) attempt to pass through Customs at the U.S.-Mexican border. (Photo courtesy of Warner Bros. Pictures)

We’re the Millers is the kind of laugh till it hurts, spit-take funny, doubling over in your seat comedy. The premise is a modern take on National Lampoon’s Vacation with a raunchier edge and a creative spin on the family road trip formula.

David Clark (Jason Sudekis) is a moderately successful pot dealer. He leads a carefree life of dealing, watching TV and trying to flirt with his neighbor, Rose O’Reilly (Jennifer Aniston), a stripper at a local bar. David tries to stop some thieves from robbing teen runaway Casey Mathis (Emma Roberts) and beating up Kenny Rossmore (Will Poulter), an awkward virgin who also lives in David’s apartment building, but he quickly regrets his good deed as the crooks steal his weed and put him in debt to his drug kingpin boss, Brad Gurdlinger (Ed Helms). David agrees to settle the debt by transporting a smidge (really a few hundred kilos) of weed from Mexico. Figuring he’s got a better chance of clearing customs under the pretense of a family vacation, David recruits Rose, Casey and Kenny to play his family — the Millers.

Along the way, they run in to Don and Edie Fitzgerald (Nick Offerman and Kathryn Hahn) and their daughter Melissa (Molly Quinn) who are also on a roadtrip, trying to help Don relax from his job as a DEA agent. Although trying to avoid them, the Millers have mechanical problems along the way and are forced to spend a few days with the Fitzgeralds. Along the way, Kenny falls for Melissa, providing some uncomfortable moments for David.

While David tries to get his load delivered on time and collect his payout, Kenny falls for Melissa and gets bitten by a spider on his testicle, causing it to swell up and him to require hospitalization. And Casey runs off with a carnival employee, while the Mexican drug lords hunt them down.

Sudekis has been a consistently strong supporting player, but here he proves that he can do more than just mug through five-minute skits parodying Mitt Romney and Joe Biden on Saturday Night Live as he delivers a winning performance reminiscent of a young Clark Griswold. Aniston, who proved a raunchy comedy revelation in Horrible Bosses, is again in fine form and with several stripper routines is becoming a bigger sex symbol than when Friends kicked off her popularity in 1994.

Roberts and Poulter could have been disposal supporting players relegated to the background, but they’re strong and make their characters just as essential. The film finds a surprisingly kinder side as the faux family begins to bond over evading rival drug lords and enduring the overly helpful Fitzgerald family.

We’re the Millers doesn’t break any new comedic ground, but it’s packed with some great laughs and an ensemble cast that seems game for just about anything, no matter how outrageous or inappropriate it may be. It probably won’t win an Oscar, but in a summer of not-too-funny comedies, this will have you laughing throughout the whole movie. Rated R. Opens , Aug. 7, 2013.