Sutter Keely lives in the now. It’s a good place for him. A high school senior, charming and self-possessed, he’s the life of the party, loves his job at a men’s clothing store and has no plans for the future. A budding alcoholic, he’s never far from his supersized, whiskey-fortified Thirst Master cup. But after being dumped by his girlfriend, Sutter gets drunk and wakes up on a lawn with Aimee Finicky standing over him. She’s different: the “nice girl” who reads science fiction and doesn’t have a boyfriend. While Aimee has dreams of a future, Sutter lives in the impressive delusion of a spectacular now, yet somehow, they’re drawn together. 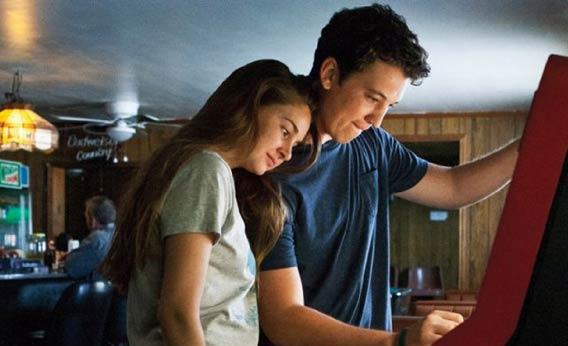 Shailene Woodley and Miles Teller in The Spectacular Now. (Photo courtesy of A24)

It’s one thing to live in the moment. It’s another to be stuck in it and avoiding the future. The Spectacular Now is a high school coming-of-age story that is funny, compassionate and wise portrait of teens on the verge of adulthood.

As we meet Sutter Keely (Miles Teller) — an underachieving high school senior whose easygoing charm makes him well-liked, but not taken seriously — he is making a halfhearted attempt at writing a college admissions essay. The only “formative experience” he can come up with to write about is his recent breakup with his girlfriend Cassidy (Brie Larson), who’s gotten fed up with his responsibility-dodging ways. After attempting to forget Cassidy with an all-night kegger, Sutter wakes up on the front lawn of Aimee Finicky (Shailene Woodley), a quiet, hard-working classmate he barely knows. She drives him around town to find his missing car and helps him with geometry—and gradually a flirtation begins to build between the two.

The easygoing Sutter is so much fun to hang out with — a budding alcoholic, Sutter brings a flask filled with whiskey to his part-time job at a men’s clothing store and when he gets behind the wheel —that it takes the audience almost as long as Aimee to notice that not everything in Sutter’s life is all that awesome. Sutter’s mother (Jennifer Jason Leigh), an overworked nurse in a perpetually bad mood, refuses to tell her son his father’s whereabouts. When Sutter finally tracks his dad (Kyle Chandler) down with Aimee’s encouragement, the three of them spend an afternoon together in a bar that makes it clear why his parents split in the first place.

Aimee’s slow realization that the boy she’s falling in love with is in no particular hurry to become a man is only one of the story threads. There’s also Aimee’s attempt to stand up to her needy single mother who’s trying to prevent her daughter from leaving town for college, or possibly going to college at all. And the fraught, quasi-paternal relationship between the underachieving Sutter and his boss (Bob Odenkirk) at the clothing store where he works. Even Cassidy, Sutter’s ex, gets a story arc that elevates her into more than just a blond stereotype.

A major plot twist just past the movie’s midpoint takes The Spectacular Now to some pretty dark and downbeat places for a movie of its type.

Everything about this film feels authentic. Teller and Woodley’s chemistry is convincing. With her guileless smile, Woodley is wonderfully natural. Aimee may be smart and quiet, but she’s not socially awkward. She’s a well-rounded, non-stereotypical character, comfortable in her own skin and openhearted. Teller has the charismatic appeal of a young John Cusack. The pair received a Special Jury Prize at the Sundance Film Festival this year for their performances.

This soulful and sincere portrait of youth doesn’t gloss over painful truths or focus on the sensational, superficial or raucous aspects of adolescence. It doesn’t traffic in teen clichés. Rather, it compassionately conveys the confusion, insecurities and joys that are a quintessential part of being 18.

With sly humor and an intensity of feeling, The Spectacular Now creates a vivid, three-dimensional portrait of youth confronting the funny, thrilling and perilous business of modern love and adulthood. What starts as an unlikely romance becomes a sharp-eyed, straight-up snapshot of the heady confusion and haunting passion of youth — one that doesn’t look for tidy truths. The characters in are well rounded with strong performances and disarming chemistry. This deeply felt film is like a loving elegy to the end of childhood. It’s easily one of summer’s best films. Rated R. Opens , Aug. 2, 2013.