Washington, D.C., is a foodie’s town and Washingtonian diners are savvy about where their food comes from. Thousands of residents visit one or more of the many farmers markets each week from Dupont Circle to Columbia Heights, and from Penn Quarter to Mount Pleasant. There’s also Eastern Market and Union Market where vendor’s sell their local wares daily. 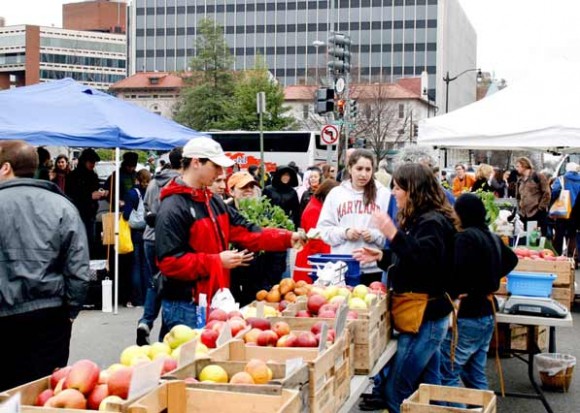 Farm-to-Table Week, now in its third year, continues to grow. Now through July 28, you’ll have the opportunity to dine at participating Farm-to-Table Week restaurants, tour local edible gardens, celebrate (and taste) D.C.’s booming beer culture and learn the ins and outs of making more local food and drink a reality throughout D.C. A 125-vendors Farm-to-Street block party at Union Market closes out the week.

According to Eat Local First D.C., a non-profit organization that promotes local businesses, food grown within a 50-mile radius of D.C. was probably picked within the last day or two and is crisp, sweet and loaded with flavor. Fresh produce loses nutrients quickly, sugars turn to starches, plant cells shrink and produce loses its vitality. Buying local ensures that you buy food that is at the peak of flavor and nutritive value.

Eat Local also says that on average, for each dollar spent on products made by large corporations, only 15 cents remain in local communities. But when you spend a dollar at a local business or farm, 45 cents are reinvested locally. Sustainable farming keeps pesticides and other chemicals out of runoff water. Local, small farmers have the flexibility to maintain crop diversification and implement sustainable harvesting methods that impact the quality of our water source. Buying local has a smaller carbon footprint, and it is estimated that farmers who practice conservation tillage can sequester 12-14 percent of the carbon emitted by vehicles and industrial farms.

Lavagna at 539 8th St. SE, is offering a special $35.13 Farm-to-Table Restaurant Week Menu. The first course is a choice of porchetta or bruschetta, followed by a choice of house-made pasta flight/sampler, fettuccine bolognese, rigatoni, risotto or chicken and waffles. Dessert includes creme brulee or tiramisu. Plus, anyone ordering the special menu receives 25 percent off a glass of wine.

Meridian Pint, 3400 11th St. NW, has six days of events planned, all of which feature $5 beers and special food parings. Monday is Maryland Beer Night, with 24 different Free State beers on tap. Tuesday is Celebrate the Commonwealth, with 24 Virginia beers, which you can also choose to pair with Chincoteague oysters or Virginia cheeses. Wednesday is the District’s turn, with 22 beers and ;ocal sausages will be grilled on the patio. Thursday features 24 different beers from eight DMV breweries on tap and eight casks prepared with ingredients that could be foraged locally. On Friday, six regional brewpubs, including the Brewer’s Art, Devils Backbone and Mad Fox, will take over the 24 taps.

Pizzeria Paradiso‘s three locations are offering a special “Locavore” pizza made with heirloom tomato sauce, cubanelle peppers, buffalo mozzarella and other locally sourced ingredients. As a bonus, every pizza purchased allows you to order two local draft beers for half price.

Here’s some events planned this week (for details visit http://www.eatlocalfirstdc.com/):