Red 2 Plot Is Past It’s Prime

In Red 2, the high-octane action-comedy sequel to the worldwide sleeper hit, retired black-ops CIA agent Frank Moses reunites his unlikely team of elite operatives for a global quest to track down a missing portable nuclear device. To succeed, they’ll need to survive an army of relentless assassins, ruthless terrorists and power-crazed government officials, all eager to get their hands on the next-generation weapon. The mission takes Moses and his motley crew to Paris, London and Moscow. Outgunned and outmanned, they have only their cunning wits, their old-school skills, and each other to rely on as they try to save the world-and stay alive in the process. 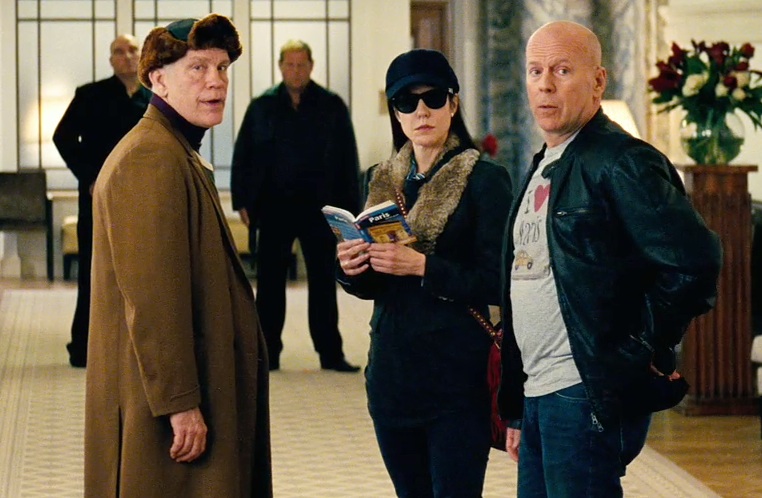 John Malkovich, Mary-Louise Parker and Bruce Willis are out of retirement in Reds 2. (Photo courtesy of Summit Entertainment)

Now a happily contented man indulging his domestic instincts, retired CIA field agent Frank Moses (Bruce Willis) has settled down with Sarah Ross (Mary-Louise Parker), the much younger woman who fell in love with him after he repeatedly saved her from various attempts on her life by the CIA, FBI and various law enforcement agencies in Red.

But coupled life has gotten rather routine for Ross, so when Moses’ perennially paranoid former partner Marvin Boggs (John Malkovich) unexpectedly turns up spouting warnings about a plot to take them out, Sarah’s more than ready to listen, despite Moses’ resistance. He’s quickly persuaded, however, when a car bomb kills Boggs, and he’s dragged in for questioning about a clandestine Cold War-era mission called “Nightshade” that he’s suspected of having coordinated. Denying any knowledge, Moses quickly becomes a liability to Pentagon special agent Jack Horton (Neal McDonough), who’s about to finish him off when Boggs turns up very much alive and well-armed, rescuing Moses as they go on the run, with Sarah once again in tow.

Nightshade, it turns out, was a briefcase nuke that Moses and Boggs unwittingly helped smuggle into the Soviet Union in the 70s. Its whereabouts are currently unknown — even to them — regardless of the opinion of a rouge group within the Pentagon, which is determined to retrieve it. Unable to bring in the former CIA spooks, however, the DOD recruits a couple of expert assassins: Moses former MI6 British counterpart Victoria (Helen Mirren) and ruthless South Korean contract killer Han Cho Bai (Byung Hun Lee), setting off a chase across Europe to determine the location of the Nightshade device.

In Paris, the Americans meet up with Katja (Catherine Zeta-Jones), a Russian agent and Moses’ former flame, who’s assigned to locate Nightshade for the Kremlin. Her amorous reunion with Moses traps him between Ross’ ire and the mission exigencies, but when Bai arrives heavily armed and primed to eliminate Moses and Boggs, a fortuitous discovery sends them back to London to retrieve elderly scientist Edward Bailey (Anthony Hopkins), a weapons expert whom Moses believes died during the Nightshade operation.

By now Victoria has rejoined her old comrades, leading Moses deep within a British psych prison to extract Bailey, an addled genius with apparent memory loss and no clear idea of what might have transpired four decades ago in Moscow — which is exactly where they’ll have to go to seek out the weapon, if they can manage to counter Bai’s repeated ambushes, Horton and the federal agents on their tail and an installation full of Russian military experts.

Dipping back into the source material created for DC Comics by Warren Ellis and Cully Hamner, returning screenwriters Jon and Erich Hoeber effectively revive their team of “retired, extremely dangerous” characters, but then subject them to an uninspired, generic narrative that rarely rises above the strictly routine.

Whether there’s enough gas left in the tank for another sequel might depend as much on the age and enthusiasm of the actors as it does on the movie’s performance. But when it comes to this crew of aging action heroes, it’s best to never say “retired.”

With the concept of retired secret agents pressed back into service by imminent threats to their lives, 2010’s Red benefited from a wave of enthusiasm for high-octane baby boomer action comedies. By now the interest factor in a Red sequel is more in the execution than almost anything else, particularly since Red 2 doesn’t have a whole lot new to offer. Not that it isn’t entertaining, but the film’s premise is certainly well past its “use by” date, resulting in another passably palatable sequel distinguished by a lack of narrative and stylistic coherence that could potentially underpin a really viable franchise. Rated R. Opens July 19, 2013.