This animated sequel finds the no-longer-despicable former super-criminal Gru (voiced by Steve Carell) wallowing in domestic bliss with the trio of orphan girls he adopted in the first movie — until he’s faced with a new evil threat. Drafted by the Anti-Villain League, Gru has to call upon his cunning of old to foil the plans of a mysterious, shady figure intent on world domination. Aware of how important Gru’s little yellow helpers, the Minions, were to the original film, directors Pierre Coffin and Chris Renaud place them center stage, at one point turning them against their beloved master. 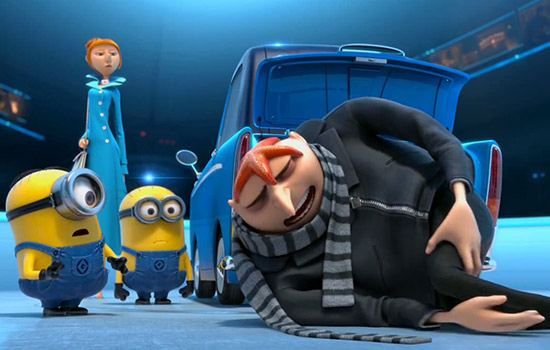 The setup’s good for a few jokes, but it’s clear that much of this reformed villain’s talents are untapped. The MI6-style Anti-Villain League, however, has other plans. Secret agent Lucy Wilde (Kristen Wiig) recruits Gru’s help recovering a top-secret transmutation serum stolen from the Arctic Circle and stashed somewhere in a shopping mall. The villain also has dastardly designs on Gru’s cute, cackling horde of canary-yellow minions.

Setting up an undercover operation in a mall cupcake shop with Lucy, Gru has his suspicions set on the gregarious owner of a Mexican restaurant (Benjamin Bratt), who bears a nagging resemblance to El Macho, a notorious villain believed to have perished while riding a shark into a volcano with 250 pounds of TNT strapped to his chest.

Those who foolishly leave at the start of the credits will miss out on another entertaining 3D demonstration again led by a handful of those wacky Minions.

Despicable Me 2 isn’t as good as the first, which was more heartwarming, but it is still a very good sequel and has everything you want in a family film — humor for both young and older audiences. As in the first, the Minions are the best part, and they get even more screen time in this one than they did previously. It’s almost impossible not to laugh at these goofy and lovable characters. By the end, every child in the audience will want his or her own monster-minion toy. Rated PG. Opens July 3, 2013.