A Recipe for Gumbo

It’s easy for me to find any excuse to travel. Particularly when I don’t have plans. Travel for the sake of travel, intentionally leaving sans itinerary.

This past week I followed my Southern soul to Cajun country, Louisiana. I packed my backpack and headed to New Orleans with only one thing in my mind: food, and lots of it. And since I was meeting a friend from culinary school, I had high hopes for where this week was going.

When telling friends, family and coworkers about my upcoming trip, I got the same, repetitive response: “Go to this place for the best po’ boys,” and “Turn left at this light, then around the bend, and the little shack there has better boiled crawfish than the others, and don’t forget that the only place to eat gumbo is at so & so’s.” And so I took this advice … and I ignored it. Potentially because the orders were overwhelming and potentially because I trust my own instincts and ignore others’ advice; I’d rather see where my day takes me. Probably the latter.

So I walked out of NOLA’s airport, my bag of cashews, dried fruit and chocolate chips in hand, like a proper Northerner, and opened my arms to the deep South. And when I got into the city, I went to the closest bar, nestled into a seat and placed my order for a cold beer and a giant shrimp po’ boy. I made it. Admittedly, the shrimp po’ boy didn’t compare to the usual Tuesday special at DC Bread and Brew, and I was disappointed by its lack of … gusto.  But that didn’t stop me, I wanted it all.

Coming from a job of teaching healthy food options, I mentally prepared myself for a week of fried everything. So with my calorie counter on the back burner, I proceeded. I continued into beignets, gumbo, jambalaya, fried gator, jambalaya, hushpuppies. Life was good, really really good. 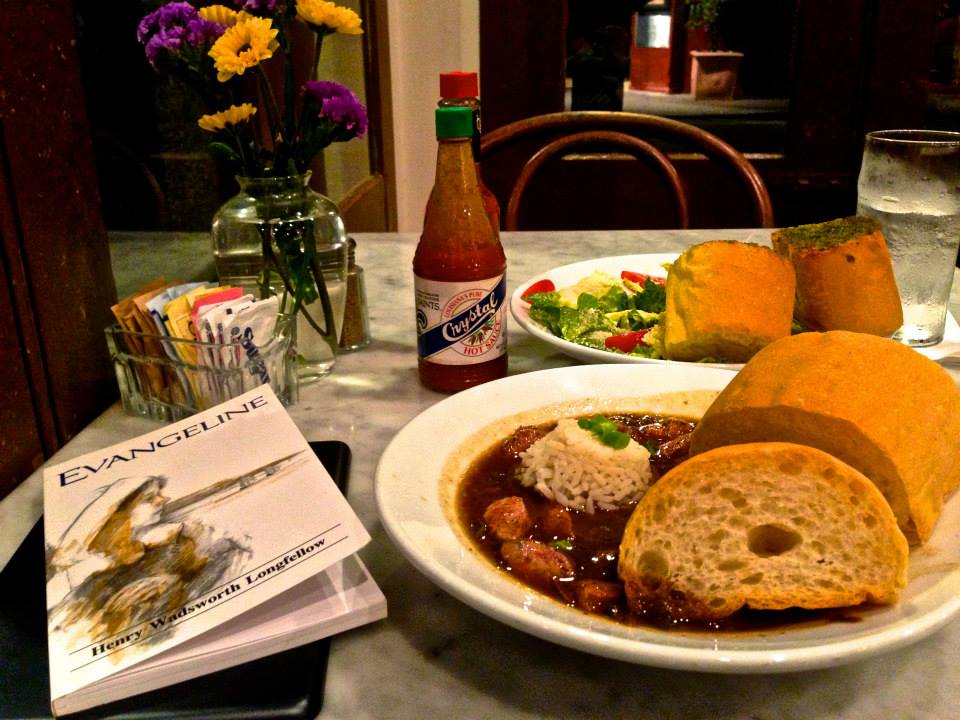 Unfortunately, it didn’t take long for me to hit a breaking point. Some folks are incredibly self aware of their finances or their appearance, I happen to be overly aware of how foods make me feel. I suppose it didn’t take so long for that pot of worry-free eating on the back burner to be smoking in my face on the front burner. So there I was at the next restaurant, day three, ordering rice and beans with a great big side of green beans. I felt proud. Healthy (er) options, this is good.

The food arrives … If butter were a vegetable, it would be grown in Pat’s Restaurant in Henderson, La., and disguised as a side of “green beans.” Given in a taste test, I probably would not have guessed that those green beans, were, in fact, that earthy, sweet, satisfying stalk. Disappointed, yet full of rice and beans, I left my green beans for the trash. I craved, I craved so badly an arugula salad, something from SweetGreen, a Chipotle bowl, ANYTHING. ANYTHING from the earth that is so easily found in our waist-obsessed District. Yet here I am, in this amazing state, legitimately annoyed by the food being offered. Am I really this boring, this health conscious, this picky?

I understand that certain cultures have their food claims to fame. And that oftentimes these are a bit of tourist traps. Being from Philly, I don’t eat cheesesteaks for dinner every night, but I certainly know who serves the best ones. So I understand that spending a week in the French Quarter and the Louisiaina bayou lends itself to a week of “traditional” cajun cooking. Don’t get me wrong, I checked out of my hotel absolutely in love with what I saw of Louisiana and genuinely thrilled with my new food adventures, but something just surprised me, how it felt that an entire city could get away with not having a vegetable on their dinner menu? Doesn’t this bother anybody else?

(It’s worth mentioning how incredibly judgmental I felt even thinking this; who am I, as a visitor, to judge?)

That day I headed on the plane, sitting next to a friendly couple along the way. We got talking about New Orleans, D.C. and the wife happened to love cooking as well. I asked her all about her recipes for jambalaya and gumbo, and she spoke with such care about why she uses oil for her roux instead of butter, which types of bell peppers make the best gumbo, her recipe for her spicy cornbread and why one can only use andouille sausage for their jambalaya.

She showed me the shrimp that she brought in her carry-on (!!) and pictures of her most recent kitchen escapades. The flight melted away with her food talk and I ate every word up. She laughed when I mentioned that “Everything is fried!!” and she reassured me that Louisiana’s farmers have the best produce around. And then, after writing down her word-for-word recipe of gumbo, I realized that that interaction, unlike the hushpuppies and fried gator, was precisely the food adventure I had longed for.

Here is her recipe, in her words:

3. Add about 6 cups shrimp or chicken stock. Let simmer and reduce for 3-4 hours.

4. Add andouille sausage, shrimp and chicken. She also occasionally added kale at this point too. Shrimp will not take long to cook, so add around 4 minutes before serving.