Uptight FBI special agent Sarah Ashburn (Sandra Bullock) is paired with foul-mouthed Boston cop Shannon Mullins (Melissa McCarthy) couldn’t be more incompatible. But they are paired up to take down a ruthless drug lord. The hitch: neither woman has ever had a partner — or a friend for that matter. When they join forces, they become the last thing anyone expected: buddies. 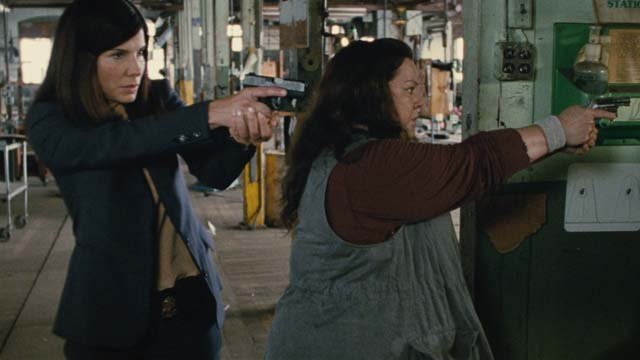 The Heat is a formulaic buddy-cop action comedy but instead of being the usual male-dominated, it has gender diversity. Although no less predictable than its masculine counterparts, it’s bawdier and funnier than most. The movie follows a well-beaten path. They’re cops, they’re enemies, they’re friends, they’re opposites. It’s funny. Think Beverly Hills Cop, Starsky & Hutch or Miami Vice only female.

Bullock plays a Yale grad and top-notch FBI agent in New York City angling for the top job in the city when her boss (Demian Bichir) gets promoted to D.C. But she isn’t liked by any of her coworkers, who she often shows up and humiliates. She’s got a closet full of monochrome suits that complement her monotone life. Her pajamas are pressed, the cat she pets belongs to a neighbor and there is no family to speak of.

McCarthy’s character is a street-smart, foul-mouthed detective good at catching bad guys but not much else. She’s hated by her family (including her mother played by Jane Curtain) for putting her drug-dealing brother Jason (Michael Rapport) in jail to save him and feared by her boss and fellow cops. Her fashion sensibility leans toward thrift store, not chic, more like dollar bin.

To get the promotion, Bullock’s Ashburn is sent to Boston to solve a string of grizzly murders and has to unhappily work with Mullins. As Mullins says during their first face to face, “I’ve just spent the last 30 minutes thinking of ways to kill you.” They can’t stand each other, but they need each other. Bickering, bonding, bad guys and a lot of very bad language, mostly from McCarthy’s Mullins, ensues.

For those worried that the essential action of the genre may have softened with chicks, don’t be. The Heat is down-and-dirty tough with all the gun brandishing, foot races, car chases and bruising confrontations with the criminal element an action fan could want.

The villain is an elusive drug lord named Larkin. His brutality is legendary, his face a mystery. It’s a good twist but means the filmmakers have to throw in some other faces for us to hate in the meantime. There is DEA agent Craig (Dan Bakkedahl), a crude albino-chauvinist, and his sidekick (Taran Killam). The DEA investigation is at odds with our heros, and Craig is out to shut them down. Mullins’ favorite perp is a possible Larkin street dealer named Rojas (Spoken Reasons). Also in Larkin’s circle is the very scary, very good with knives Julian (Michael McDonald).

The Heat is the best female buddy-cop movie ever. The script draws cleverly on the pair’s strengths. McCarthy brings her envelope-pushing improvisational talents to the role of a freewheeling loudmouth beat cop. Put her with Bullock, who can nimbly play an uptight, klutzy FBI agent, and the result is goofy hysterics. Though McCarthy gets more outright laughs, the movie wouldn’t work without Bullock as her straight woman. It’s all about timing and chemistry, which they have. Rated R. Opens June 28, 2013.