Is a guy cheap if he uses group coupons to pay? The D.C. area has a plethora of those discount dining deals – Groupon, Living Social, Specialicious… They fill up your email inboxes several times a day.

For something that’s been going on since the beginning of time, dating always seems to become more difficult each year. First guys had to worry about picking the girl up or meeting her. After they figured that out, they had to worry about where to take her and how much to spend. 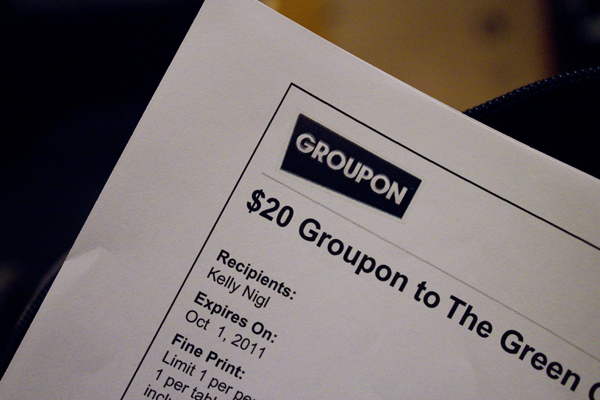 Now, in 2013, the fellas have yet another issue to confront: How to pay for everything. We’re not talking “paper or plastic” either. But is it okay to use one of those discount coupons on a date? That’s the question we posed to our Facebook friends and Twitter followers.

True, guys should probably pay closer attention to who they are asking out before they decide whether or not to whip out the Living Social. If his date’s handbag cost three times as much as his car payment, there is a chance that she won’t appreciate him not putting his best dollar forward in her presence. If her idea of a good time mainly consists of having money spent on her, best believe she’s going to want every penny dedicated to her, not just 50 percent.

For the most part, our readers didn’t think a half-priced deal should be used on the first few dates, but maybe after that.

“Definitely not on the first date!” tweeted Ashley Lettich (@AshleyInDC).

“I’d say it’s a little weird on the first or second date,” tweeted Alyse Danikowski (@Alyse_Marie). “But after that, go for it!”

“I have but probably not in the beginning stages of dating,” said Shawntel Yow Covington on Facebook. “I used one and my boyfriend was thankful.”

It sounds like the ladies don’t mind guys using Groupon on dates; it just depends on what it is. So guys, if you’re taking the young lady out on a helicopter ride, Groupon is all good. But if you’re going out for steak, shrimp and cheddar biscuits, you’re going to have to spend your cheese.

“If they use one, I don’t want to know about it. Not in the beginning anyway,” wrote Body Conscious Beauty on Facebook. “I think for experiences like wine tasting and such ok, but at dinner I don’t want him to be fumbling with that.”