Kardashian gave birth last Saturday. Neither she nor the baby have been spotted in or out of the hospital since then, although friends have stopped by and Tweeted their well-wishes. 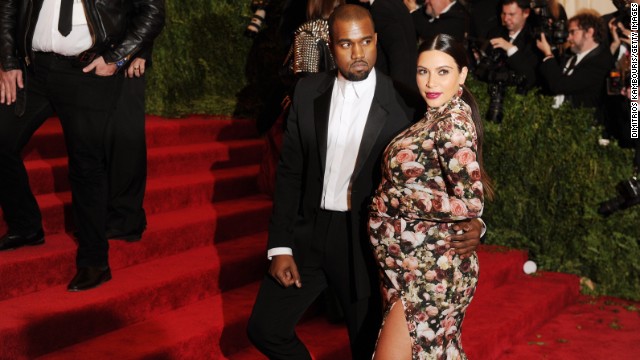 Kanye West and Kim Kardashian attend a gala t the Metropolitan Museum of Art on May 6, 2013 in New York City. (Getty Images)

The baby was born at Cedars-Sinai Medical Center in West Hollywood five weeks early and weighed in just under 5 pounds. West was reported to be beside Kardashian’s side in the delivery room for the birth. He cancelled an appearance at his own record release party when Kardashian told him she was feeling “a little off.”

E! reports that Kardashian, West and the baby — nicknamed “Nori” — left the hospital overnight Thursday and were heading to an undisclosed L.A. home. The family has stayed mostly silent about the birth, with matriarch Kris Jenner only commenting on the appearance of the child.

TMZ posted an image of what it says is the baby’s birth certificate. And if legit, it looks like North is only headed West — that is, she has no middle name.

The document, filed in Los Angeles County, features only Kardashian’s signature and reveals that her daughter was born at 5:34 a.m. on June 15.

It didn’t take long after the baby’s name was leaked that the Twitter jokes started.

Fuck, I lost my office pool. I had Ratings Spike Kardashian-West.

So I'm assuming that North West won't be a One Direction fan?

Kim and Kanye named their baby North West. It's one of the few things in Kim's life that hasn't gone south. #sorryshesprobablyverynice

So Blue Ivy got the stripper name, and North West got the direction to the strip club? Nice, team work.

I'm just going to name my next kid a set of geographic coordinates. Welcome to the world, 40.7143° N! http://t.co/RnrwJLeKq8