Spring is in the air, and new restaurants are popping up like the tulips and daffodils. Among the new D.C. area restaurant are two chicken and doughnut joints, a French bistro, a sausage grill and a 31-TV-screen sports bar. So whether you want a night out with that special someone, to relax on an outdoor patio or get rowdy with friends over beers and the big game, check out these new spots and watch for even more coming soon! 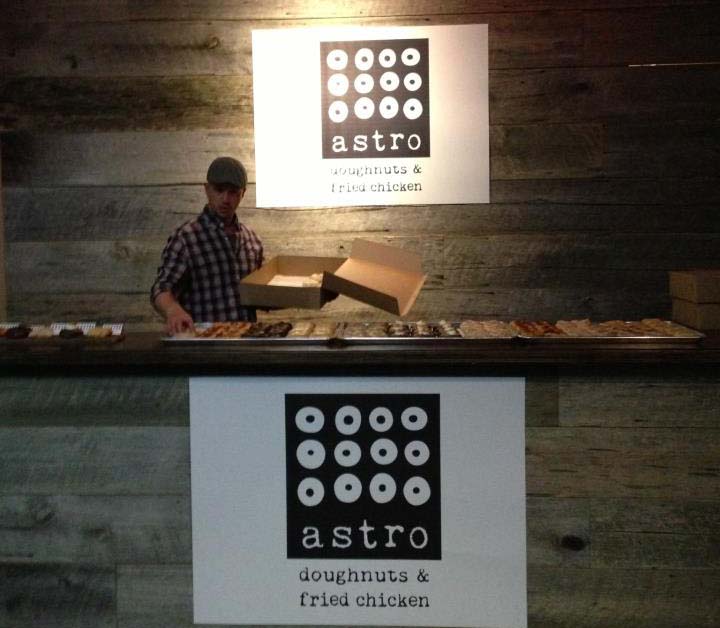 First D.C. fell in love with the cupcake. But the new sweet treat fad is doughnuts. And not just your plain Jane glazed doughnut from Dunkin, Krispy Kreme or Shoppers Food, but gourmet doughnuts like those from chef Jason Gehring at Astro Doughnuts & Fried Chicken, which opened April 8 at 1308 G St. NW near Metro Center. The fried chicken comes in traditional buttermilk or double-fried Korean style with a spicy garlic or Sriracha glaze. Doughnuts includes daily staples like vanilla glazed or maple bacon with others that rotate depending on the day of the week including creamsicle or grapefruit.

On April 18, Chef Frederik De Pue opened Azur, his second new restaurant of 2013. The upscale casual contemporary seafood spot is located at 405 8th St. NW, the Penn Quarter building formerly occupied by Jose Andres’s Café Atlantico and Minibar. The menu at the 135-seat restaurant includes roasted turbot with hakurie turnips, red mullet alongside a shaved fennel salad and grilled tiger prawns with snap peas and popcorn grits. Azur also offers shellfish cooked “en cocotte,” prepared in a mussel pot and brought to the table with the cooking liquid in a deep serving dish. Choices include mussels, clams and lobster cooked in a variety of flavored broths, from a Southeast Asian-inspired blend of coconut broth, lemon grass and Thai basil to the traditionally Belgian combination of buttered leeks, ale and parsley. The rotating menu will also include a small selection of dishes for vegetarians and carnivores. On the third floor, the small, glass-fronted counter that formerly housed Minibar has been converted to a six-seat raw bar offering oysters, caviar and house-cured salmon. Briny bar bites are the focus of the expanded first floor bar’s menu. Fish and chips, baked oysters, marinated white anchovies, sweet and sour fried squid and uni toast are served alongside a list of classic and original cocktails named after famous boats.

An izakaya is a traditional Japanese bar serving drinks and small snacks. Accessible via a side door to the left of the ramen joint, the 90-seat establishment at 705 Sixth St. NW, opened March 28. At the bar, patrons can choose beer, wine, Japanese whisky, shochu, sake and craft cocktails. Food ranges from $3 to $15 and comes out on small plates meant to be ordered throughout the evening. The menu includes grilled oysters with housemade oyster salt and sake, grilled avocado with ponzu and fresh wasabi, and abura-miso rice balls.

Dangerously Delicious Pies opened its third D.C. location in Chinatown at 675 I St. NW on April 15. Like the H Street and Union Station locations, the Chinatown eatery offers more than 50 sweet and savory pies as well as quiche and tasty beverages. There are also vegetarian and vegan options. They offer between 15-25 varieties each day depending on what is in season. Each and every pie is made with care and love, handcrafted by hand. All pies are made from scratch with no additives and/or preservatives. There’s nothing frozen, generic or mass-produced about what they do. Chinatown will have a larger selection than Union Station and be easier to get to than the original H Street location. Owner and pie man Rodney Henry will be on this summer’s edition of Food Network’s Next Food Network Star competing for his own show. 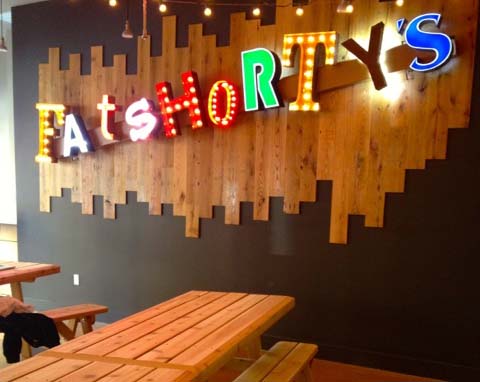 Chef Rahman “Rock” Harper, the Season 3 winner of Hell’s Kitchen, and restauranteur Aaron Gordon opened Fat Shorty’s Sausage Grill in at 3035 Clarendon Blvd., Arlington, on April 4. The Belgium-inspired beer hall and sausage restaurant serves almost 20 different types of sausages ranging from $6.75-$8.25. You can get your sausage on a plain bun, and pick two of four toppings of grilled onions, sweet and hot peppers or sauerkraut. Condiments include Mumbo Sauce, mustard and ketchup. There’s even a cozy outdoor patrio with picnic tables to dine with friends.

GBD (which gets its name from the restaurant kitchen shorthand for golden, brown and delicious) pairs the sweet and savory specialties of husband and wife team Chef Kyle Bailey and Pastry Chef Tiffany MacIsaac, the culinary masterminds behind Birch & Barley. Located at 1323 Connecticut Ave. NW, just south of Dupont Circle, GBD opened April 5 and pulls triple duty serving breakfast, lunch and dinner. In the morning, guests find a warm and inviting spot to enjoy fresh homemade doughnuts ranging from the fried-to-order vanilla glaze and classic coffee cake to bourbon & bacon brioche with a cup of coffee. The fried chicken and menu of sides take center stage at lunchtime, while the evening will see an expanded dinner menu as well as a snack menu with craft beer, wines and specialty punches in the evening.

The national brewpub and restaurant chain just opened a large Navy Yard eatery with a spacious beer garden at 100 M St. SE, along the Capitol Riverfront and one block from Nationals Park on April 1. The 8,290 square-foot restaurant boasts a seating capacity of 226 and features a stylish dining room, outdoor patio that seats 88 and a glass-enclosed brewery. It is the fourth area eatery for the chain. Grab some garlic fries or a handcrafted brew before or after a game.

8. The Grill Room and Rye Bar

Tucked up along the historic C&O Canal, The Grill Room at the new Capella Hotel at 1050 31st St NW in Georgeotwn opened the last weekend of March and specializes in hand-cut, bone-in, artisan meats, fresh seafood and tableside preparations. Framed with a wall of floor to ceiling windows and fluid geometric lines, the ambiance is one of relaxed refinement. Or you can dine al fresco on the patio. The newly opened Rye Bar specializes in a rare and special selection of rye whiskies. 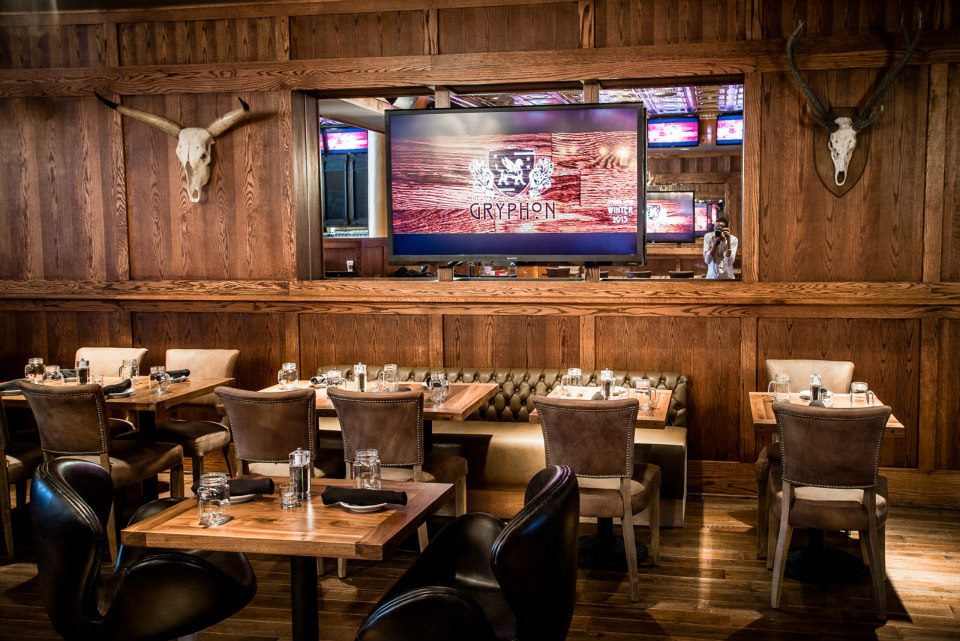 La Tagliatella, an Italian restaurant chain with two eateries in Atlanta and more than 130 locations in Europe, opened at 2950 Clarendon Blvd. in the Clarendon area on April 1. It is also opening another location at 4053 Campbell Ave. in Shirlington. The newly opened Clarendon spot boasts 400 noodle-sauce combinations that range from pesto to mushroom-foie, plus a variety of antipasti and Neopolitan-style pies. An added perk is a daily happy hour that throws $4 beers and $5 cocktails and wine into the mix.

The restaurant opened in a former laundry at 1601 14th St. NW in Logan Circle on April 12 Le Diplomate features an on-site bakery producing homemade baguettes and brioche and an outdoor café for nice days. The 260-seat French restaurant serves breakfast, lunch and dinner. The menu includes a variety of classic dishes including onion soup gratinee, steak frites and poulet roti as well as contemporary bistro fare, with dishes such as shaved veal tongue with mache and bavette de doeuf à l’echalote (flank steak). There is also a raw bar with oysters and other seafood.

Located in the heart of the K Street Corridor at 1909 K St. NW, LOOK Restaurant Lounge opened mid-March and sets out to shatter traditional stereotypes by taking the “boring” out of business lunch and the “corporate” out of corporate reception. The restaurant offers sandwiches and more than 30 small plates. The 150-seat dining room is open for lunch and dinner. Happy hour runs from noon-9 p.m with $5 Absolut cocktails and $5 glasses of select wines.

From the people who bring you El Floridano food truck, Mothership opened at 3301 Georgia Ave. NW in the Park View neighborhood on March 6. The menu includes starters like lemon dashi steamed mussels with tomato and shallots; mini patties with oxtail and bone marrow with spicy guava sauce; and a potato leek soup with applewood smoked bacon. Entrees, most of which are between $10 and $14, include slow-cooked wild boar rigatoni; herb gnocchi with shredded beef tongue ragout; and a Cuban pizza with roast pork, ham, Swiss cheese, pickles and mustard bechamel. There is also a 40-seat summer garden.

The Bloomingdale neighborhood got an upscale boost from the 50-seat Red Hen, an Italian-inspired American restaurant that opened April 16 at 1822 1st St. NW. In a neighborhood known for coffeehouses and laid-back taverns, it’s a taste of something fancier. At the center of the Red Hen’s menu is a custom wood-fired grill, used on scallops, beef tongue and hen, but other dishes will also pass through it like smoked ricotta. Clams, mussels and scallops are prominent on the menu, from the appetizers, like clams casino, to a swordfish with braised mussels and ramps. Sides like polenta or escarole are priced separately at $8 with entrees priced between $15 and $23. The drink menu focuses on seasonally-changing drinks, Italian wines and spirits. There’s a 100-bottle wine list, with five to 10 wines offered by the glass, and bottles under $60.

The Atlas District added another place to get a late night bite on April 12 with the debut of Sol Mexican Grill and Cantina, 1251 H St., NE. From the owner of the two food trucks with the same name, the restaurant serves tacos, burritos and bowls until 3:30 a.m. on Fridays and Saturdays. For now, the offerings in the first-floor counter-service space will be familiar to the mobile eateries. Pick from veggies or meats, including carnitas, chicken, steak and barbacoa, then decide whether you want them in three tacos, a burrito or a salad bowl. Toppings include pico de gallo, jalapeños, beans and rice, and are free with the exception of fresh guacamole. Also on the menu are Mexican street tacos not currently available on the truck like chorizo and beef tongue topped with onion, cilantro, radishes, and red or green salsa. After the ground-floor restaurant is up and running, a a full-service sit-down restaurant and bar complete with a cozy outdoor patio for al fresco dining will be added on the second floor beginning April 27. With Mexican sodas downstairs, the upstairs will feature an extended menu and a bar with a large selection of tequilas. The menu will include a mix of traditional Mexican and Tex-Mex, like fajitas and grilled seafood.