Some celebrities tweet when they have a bone to pick. But rapper Jay-Z drops highly produced, venom-filled, boast-bloated diss tracks to answer his critics.

Jay-Z’s “Open Letter” serves as a hybrid defense and “I don’t really care what you think” response. He released the track Thursday shortly after returning from Cuba, a trip that drew criticism from Cuban-American lawmakers in Congress who questioned how the couple got permission to travel to the communist-run island.

Several Florida lawmakers lashed out at the couple, and the administration, over the trip. U.S. law bans tourism by Americans to Cuba, though there are exceptions for certain cultural trips.

“I done turned Havana into Atlanta,” he rapped. “Boy from the hood, but got White House clearance.”
He continued: “Politicians never did shit for me except lie to me, distort history, wanna give me jail time and a fine. Fine, let me commit a real crime,” he says, a reference to less-than-pleased letters from Republican Florida Sen. Marco Rubio and Reps. Ileana Ros-Lehtinen and Mario Diaz-Balart. “Obama said, ‘Chill you’re going to get me impeached. You don’t need this shit anyway, chill with me on the beach.”

Rubio said in a statement earlier in the week: “U.S. law clearly bans tourism to Cuba by American citizens because it provides money to a cruel, repressive and murderous regime. Since their inception, the Obama Administration’s ‘people to people’ cultural exchange programs have been abused by tourists who have no interest in the Cuban people’s freedom and either don’t realize or don’t care that they’re essentially funding the regime’s systematic trampling of people’s human rights.”

The White House on Thursday challenged the artist after he released the track suggesting he got “White House clearance” for his controversial trip to Cuba with wife Beyonce. Jay Carney, President Obama’s press secretary, denied the claim — reiterating that the Treasury Department handles clearance.

“I guess nothing rhymes with Treasury,” Carney joked. “The White house, from the president on down, had nothing to do with anybody’s … travel to Cuba. That is something that Treasury handles.” 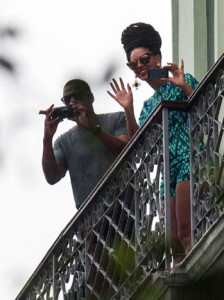 Jay-Z snaps photos while Beyonce waves to fans from the balcony of their room at Saratoga Hotel in Havana, Cuba. (Photo by Ramon Espinosa/AP)

The rapper boasted at length about the visit, suggesting Obama was involved. Jay-Z and Beyonce are both Obama supporters.

“It’s a song,” Carney said. “The president’s not communicating with Jay-Z over this trip.”

For the government’s part, the Treasury Department wrote earlier in the week that the trip was fully authorized as an educational and cultural exchange organized by another group.

His song also references his recent dealings with the New York Nets basketball team which he bought, partially sold and then helped move into a new arena in Brooklyn that he partially owns. Reports say that he will be selling his remaining shares in the team so that he can officially go into the basketball player agent business.

“I woulda moved the Nets to Brooklyn for free. Except I made millions off you f–king dweebs. I still own the building, I’m still keeping my seats. You buy that bullshit, you better keep your receipts.”