Universal Pictures releases Steven Spielberg’s classic Jurassic Park in 3D this week for the film’s 20th anniversary. With his remastering of the epic, Spielberg introduces the three-time Academy Award-winning blockbuster to a new generation of moviegoers and allows longtime fans to experience the world he envisioned in a way that was unimaginable during the film’s original release. 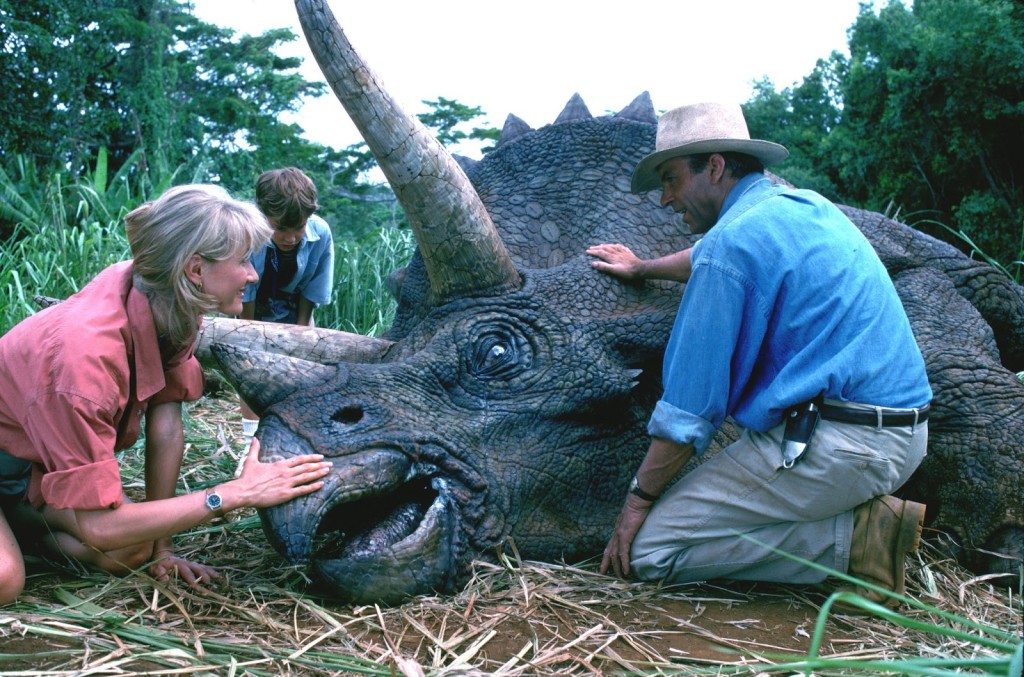 Billionaire John Hammond (Richard Attenborough) has created Jurassic Park: a theme park on the fictional Isla Nublar near Costa Rica, populated with dinosaurs cloned from prehistoric DNA. Paleontologists Alan Grant (Sam Neill) and Ellie Sattler (Laura Dern) and mathematician Ian Malcolm (Jeff Goldblum) are invited to visit the park to certify it is safe after an employee is killed. The group sets off on a tour of the park joined by Hammond’s grandchildren, Lex (Arianna Richards) and Tim Murphy (Joe Mazzello), while Hammond stays behind to observe his guests from Jurassic Park’s control room with chief engineer Ray Arnold (Samuel L. Jackson) and game warden Robert Muldoon (Bob Peck).

An incoming tropical storm forces a cancellation of the tour midway through. Jurassic Park’s computer programmer, Dennis Nedry (Wayne Night) has been paid off by one of Hammond’s rivals to steal dinosaur embryos. During the storm, Nedry deactivates the park’s security system to allow him access to the embryo storage room. Many of the park’s electric fences are deactivated as a result, releasing a Tyrannosaurus that attacks the group. While trying to flee the island, Nedry crashes his Jeep, is attacked and killed.

The shutdown disables the remaining fences, releasing three dangerous Velociraptors, which hunt Sattler and Muldoon as they try to restore power and the others as they try to get the park back online.

Jurassic Park is a lot of fun to revisit in 3D, especially if you have kids that haven’t seen it before. I recommend seeing it on the IMAX screen. As the dinosaurs come out of the screen, you’re guaranteed jump at least once or twice.

But in some respects, it is starting to show its age. Why would you spend all that money on a fancy velociraptor pen and have a manual gate and a cage that doesn’t lock into place? Why weren’t there more manual overrides on the park systems? How did the T-Rex sneak up on everyone and get into the building at the end of the film? Jurassic Park scientists seem unrealistically naïve. And the systems that were supposed to be especially high tech, like the computer control system, seem especially dated now. Jurassic Park ages well in some respects while not so well in others. Rated PG-13. Opens April 5, 2013