In the remake of the 1981 cult-hit horror film Evil Dead, five twenty-something friends head to a remote cabin. When they discover a Book of the Dead, they unwittingly summon up dormant demons living in the nearby woods. The evil presence possesses them until only one is left to fight for survival. 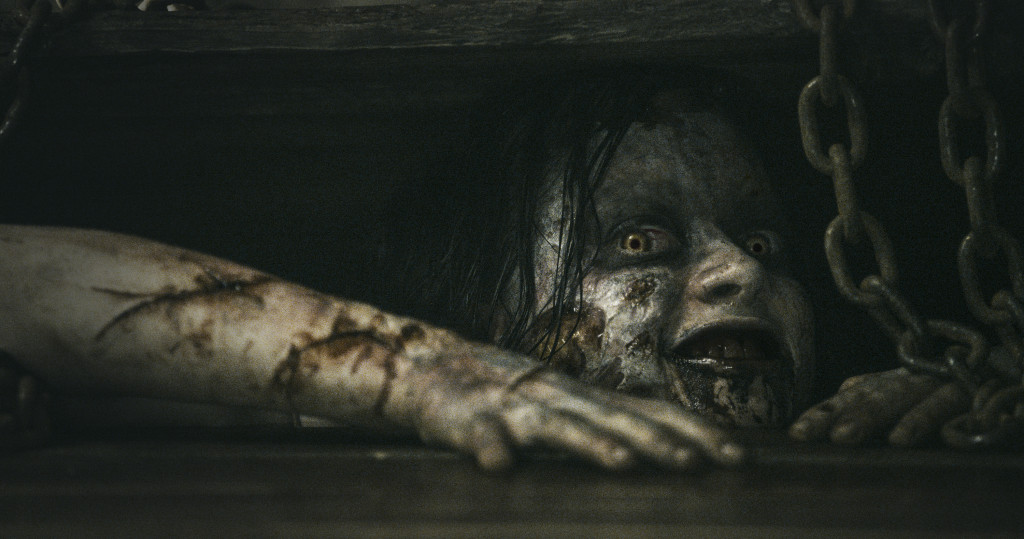 This remake keeps the five-youths-in-a-cabin plot, but renames the characters and changes their relationships to ensure viewers don’t expect a complete remake. This version offers more justification for the setting and the characters’ reluctance to leave when things get messy. In the original, the characters are at the cabin for a co-ed spring break trip to the woods.

In Avarez’s version, Mia (Jane Levy from TV’s Suburgatory), a young woman whose life has been marred by loss and addiction, asks her estranged older brother David (Shiloh Fernandez), his girlfriend Natalie (Elizabeth Blackmore) and their childhood friends Olivia (Jessica Lucas) and Eric (Lou Taylor Pucci) to join her at the family’s cabin to help her to nurse her through a cold-turkey withdrawal.
They discover that the cabin has been broken into, and the cellar transformed into a grotesque altar surrounded by dozens of mummified animals. Eric becomes fascinated with an ancient book he discovers there bound in human skin and full of warnings.

Prepared to ignore Mia’s inevitable pleas to go home, the friends first mistake her possession for the D.T.s. Not that they could for long what with her flesh bubbling, spouting promises in a demonic voice that none of them will leave and trying to kill them. Eric eventually diagnoses Mia’s condition after unwittingly setting the demons loose.

From the initial attack on Mia — the infamous “tree rape” scene — to the literal rainstorm of blood in the climax, Evil Dead delivers disgustingly gory effects. The only respite is when one of the possessed stops spitting threats and blood to speak in the wounded, innocent voice of the human who used to inhabit its body. The flip-flopping between “why are you hurting me?” and “I will rape your soul in Hell!” is one of the original film’s gags.

Warning: The trailer is graphic and approved for mature audiences only.

Most diehard Evil Dead fans will enjoy this remake, but in general it comes off as the cinematic equivalent of a cover-band tribute to a supergroup’s greatest hits with a lot more gore. It has better special effects than the low-budget 1981 original, but its biggest expense was for fake blood. Unlike Raimi’s classic, it won’t be remembered in 30 years. Unless you are a diehard fan of the original, skip it. Rated R. Opens April 5, 2013.