Fallon to Take Over Tonight Show in 2014

We all knew it was only a matter of time and now it’s official. After 22 years hosting The Tonight Show, Jay Leno is stepping down in the spring of 2014 and handing over the reins to Jimmy Fallon, Leno said Wednesday.

It wasn’t a secret and everyone knew this was coming. After he took potshots at NBC during his monologues for weeks and a month of rumors of the change, Leno’s tenure as host of The Tonight Show has officially come to an end. Late Night host and former Saturday Night Live star Jimmy Fallon has closed a deal with NBC to replace Leno in the 11:35 p.m. slot, the network announced on Wednesday. 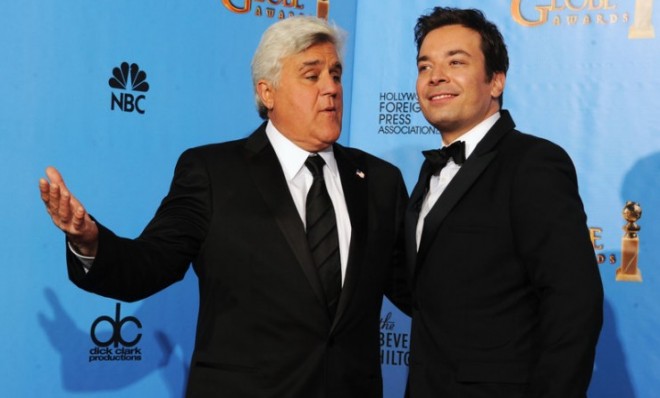 Rumors that NBC was seeking to replace Leno, whose current contract expires in September 2014, have been flying for more than a month.
“Congratulations Jimmy,” Leno said. “I hope you’re as lucky as me and hold on to the job until you’re the old guy. If you need me, I’ll be at the garage.”

NBC said in a statement that the show would return to 30 Rock in New York from Leno’s base of Los Angeles.

The late night rumors began heating up on Feb. 28, when Leno mocked NBC for falling into fifth place during the sweeps month of February behind the Spanish-language network Univision.

Leno first exited Tonight in 2009 after 17 years as host, passing the torch to Conan O’Brien, who was then the host of Late Night. Leno was moved to prime time with his own program, The Jay Leno Show, in the fall of 2009. But when that brought dismal ratings, NBC moved Leno back to Tonight at the start of 2010, leaving O’Brien out of a job. O’Brien eventually showed up on TBS.

Searching for the younger audience

Leno still leads the late night ratings, but NBC was said to be concerned about losing younger viewers to ABC’s Jimmy Kimmel, whose Jimmy Kimmel Live was moved up to 11:35 p.m. to compete with Leno and David Letterman’s Late Show at the beginning of the year.
“The more time Jimmy Kimmel is in that slot, the more the young audience goes that way, the harder it is for (Fallon) to keep that audience,” one source familiar with the network’s thought process told The Hollywood Reporter in March.