First, there was talk that embattled Today Show host Matt Lauer would replace Alec Trebek as the host of Jeopardy! when Trebek retires in 2016. Now there’s word that NBC has approached CNN’s Anderson Cooper about replacing Lauer on the morning show. 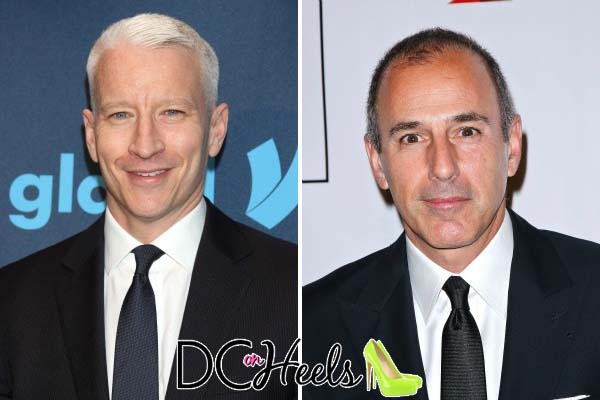 Anderson Cooper (left) is rumored to be on the short list to replace Matt Lauer (right) as host of the Today Show.

Lauer out over Curry ouster?

The website deadline.com reported late Tuesday that NBC heads talked with Cooper, 45, about replacing Lauer, 55, by the end of the year. The New York Times confirmed the call took place. Lauer has been the focus of blistering criticism over the ouster of co-host Ann Curry and the show’s ratings slide despite the $25 million contract he signed just last year. He has just under two years remaining. Cooper’s syndicated talk show, Anderson Live, is being canceled at the end of this season. He also anchors CNN’s Anderson Cooper 360.
Cooper is just the latest rumored to be in the running to replace Lauer. Ryan Seacrest, current Today co-host Willie Geist and Meet the Press host David Gregory have also been reportedly up for the job. Publicly, NBC execs have stood by Lauer. A show spokeswoman dismissed the rumors about Cooper and denied the network was considering replacing Lauer.

An NBC News executive, however, said the network has talked with possible replacements from inside and outside the network, but that reading anything into that was presumptuous.

Cooper would be an ideal morning host. He is very popular, is capable with hard news stories and fluff that dominates the morning shows and is witty and fast on his feet. He’s also been rumored to be in the running for Trebek’s spot.

Lauer’s fading fan base and attempts to reform his public image have been daily fodder in the media ever since Curry was unceremoniously axed as his co-anchor last June.