The new Le Diplomate restaurant is getting ready to open at 14th & Q Streets NW.

According to a tweet Monday by @StarrRestaurant, “We are taking dinner reservations at #LeDiplomate in DC starting April 12th! Give us a call between 10am and 6pm to book: 202.332.3333” 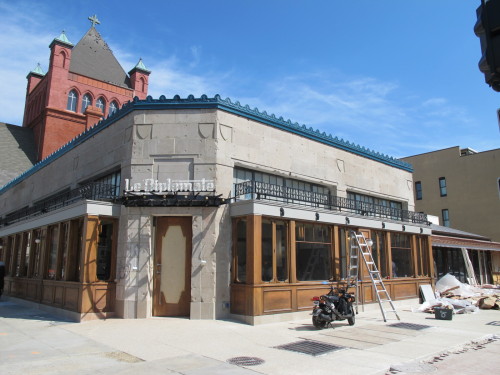 Le Diplomate at 14th & Q Streets NW in Logan Circle is being transformed from an old laundry.

The restaurant will open at the site of a former laundry at 1601 14th St. NW in Logan Circle. It is inspired by Parc in Philadelphia, another restaurant owned by Stephen Starr, although it is supposed to be more intimate. Starr owns 29 other restaurants in Philadelphia, New York City, Atlantic City and Fort Lauderdale. Le Diplomate is his first D.C. restaurant and will feature an on-site bakery producing homemade baguettes and brioche and an outdoor café for nice days.

According to the restaurant’s website, the 260-seat French restaurant will serve breakfast, lunch and dinner. The menu will include a variety of classic dishes including onion soup gratinee, steak frites and poulet roti as well as contemporary bistro fare, with dishes such as shaved veal tongue with mache and bavette de doeuf à l’echalote (flank steak). The new eatery will also feature a raw bar with oysters and other seafood.

Adam Schop is the new restaurant’s chef. Schop, 37, has cooked at the pan-Latin Nuela in New York and Zinc Bistro in Scottsdale, Ariz. He beat out more than a dozen candidates for the job including three French chefs.

Starr had been looking for a location in D.C. for years, but never found the right location. Then on a trip to the city, he drove past the vacant laundry. He has said he was drawn to it because it is a single-story building and not an office building. If Le Diplomate does well in D.C., there will be other Starr restaurants coming to the city, he has promised. Rumors are that Starr is looking at a space on Wisconsin Avenue in Georgetown, but the company has denied it.

The restaurant is currently hiring for most positions including baker, sous chef, butcher, line cooks, servers and hostesses. For more information, click here.