Go along on the world’s first family road trip

The Croods is a prehistoric 3D comedy adventure that follows the world’s last cave family as they embark on a journey of a lifetime when the cave that has always shielded them from danger is destroyed. The movie tells the story of the world’s first family road trip. Traveling across a spectacular landscape, the Croods discover an incredible new world filled with fantastic creatures as they embark on a journey into strange and spectacular territory in search of a new home — and their outlook is changed forever. 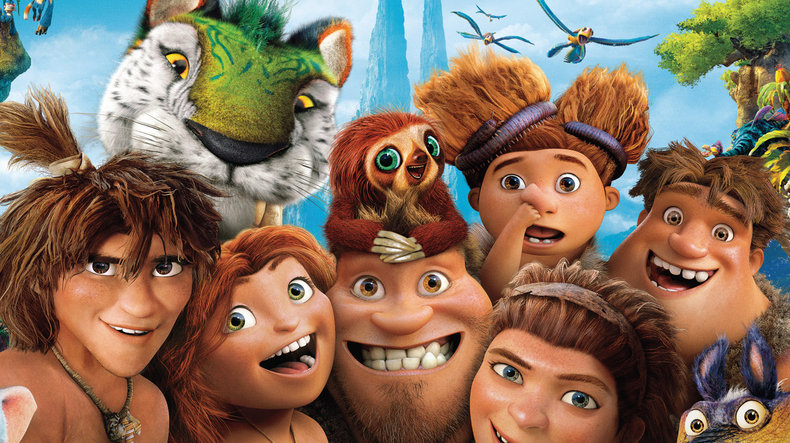 As if patriarch Grug (Nicolas Cage) didn’t already have enough to handle, it goes from bad to worse when they encounter an imaginative nomad named Guy (Ryan Reynolds.) With Guy’s help the Croods conquer their fear of the outside world and discover that they have exactly what it takes to survive — each other.

Grug is the father whose main job is feeding and keeping is family safe from the prehistoric animals. Like most dads, Grug is fiercely protective and and lives by the philosophy that “fear is good; change is bad.” His solution is to keep his family in a cave blocked by a boulder to keep the predators out. Only for a few hours every few days is the family allowed out during the day to hunt for food. His motto is “New is always bad. Never not be afraid.”

Eep is the rebellious teenage daughter (Emma Stone) who yearns for freedom to explore and enjoy the sun rather than being stuck in a dark cave. One night, she sneaks out because of her nagging feeling that there might be more to life outside the family cave. Her foray saves the family’s lives, but drags them screaming and kicking into the future.

Ugga is the mother (Catherine Keener). She has always deferred to her husband’s authority. But when she finds herself in the position of being a cave-wife without a cave, she is forced to make the right decision for her family, even if it means changing their lives.

Thunk is the bumbling son (Clark Duke). Gran is Grug’s mother-in-law (Cloris Leachman). And Guy is the hero, the last of his family who makes dazzling discoveries like fire and shoes. He is Eep’s love interest, a catalyst for change, exposes the Croods to a whole new world and leads them to safety as the land shifts and forms into the continents.

In search of a new life

To keep his family safe, Grug must learn the difference between surviving and living. Good fun establishes the quirks of a “pre-nuclear” family experiencing “cave-in fever.” Grug has all the qualities and clichés of a responsible father. In fact, the characters and the story are quite cliché, but it isn’t exploitative.

How many heels did it get?

The scenes have spectacular qualities and with vivid graphics and stark differences between the beige background of their home to the lush, greenness and colors once the family ventures out into the more majestic parts of the pre-historic world.

The threats are ominous but not frightening, and children of all ages will enjoy the show. The Croods are cute animated characters and the animation itself is of top quality. The ending is a happy one. There are great moral lessons about learning and acceptance that do not preach nor are prophetic. Rated G. Opens March 22, 2013.