The Gryphon restaurant and sports bar has opened in the DuPont neighborhood after a slight delay. The gastropub was originally scheduled to open March 2, but that had to be pushed back a few weeks because tables, chairs and wallpaper still hadn’t arrived, manager Jordan Cappolla told DC on Heels.

“Cosmetics delayed our opening,” Cappola said during a VIP preview party Tuesday night. “The electrical and everything else, that usually takes the longest, was ready.” He said they also have hired wait staff, some of which has 10 to 15 years experience.

The wood paneled dining room at the new Gryphon restaurant and sports bar in DuPont. (Photo by Travis Vaughn)

The restaurant, at 1337 Connecticut Ave. NW, is in the old Heritage India building. It had a soft opening on March 14, and Cappola said there has been “a steady crowd” ever since. The Gryphon has hardwood floors, wood paneling, antler chandlers, faux gold snakeskin wallpaper, tin ceilings, animal skulls on the walls, two wooden bars and 31 flat-screen TVs, that will be able to screen most sporting events, professional and college.

The 5,000-square-foot space has seating for 192 and standing room for 350. The DJ’s booth is in the vault of the old Hamilton National Bank, which had occupied the space at one time. 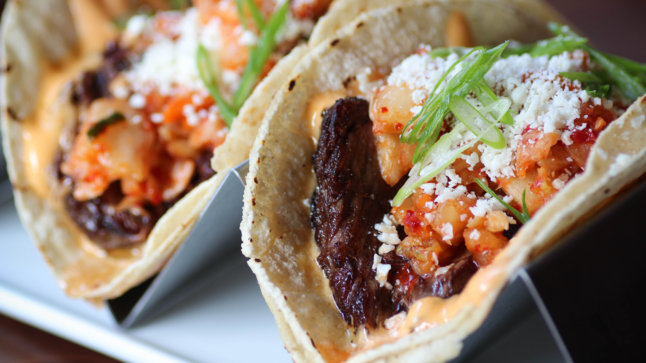 The Korean braised short rib taco appetizer at The Gryphon.

Bar food with a twist

The menu was created by Executive Chef Joseph Evans from sister restaurant Lost Society. In addition to standard bar fare like sliders, grilled cheese, wings and fries, the menu includes a Korean braised short-rib taco, Cajun crawfish mac and cheese, bison burgers, barbacoa tater tots with queso and gator bites (yes, real alligator). There are also salads and entrees, which include a braised short rib with grits, coco and chipotle rubbed sirloin and rockfish. There are also vegetarian and gluten-free dishes. At there bar, there are 31 bottled beers along with a few on draft.