Where Did All of These White People Come From? 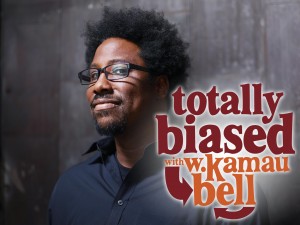 ‘Totally Biased with W. Kamau Bell’ (from Executive Producer Chris Rock.  Yes, THAT Chris Rock.) is one of the funniest shows on TV.  Seriously.  ‘Laugh-out-loud-possibly-pee-your-pants-and-only-tell-your-best-friend’ kind of funny or  ‘You-Tube-it-and-post-a-clip-on-Facebook’ kind of funny.  If you are not watching it, you should be.  (Unless you are a conservative, then you better just stick with Fox News or the NRA website for your laughs.)  I’ll wait while you DVR it…Yeah, it’s on FX…  Thursdays at 11.  Got it?  Okay.

Anyway, for those who watch the show, it is easy to imagine their cast and crew as a group of some of your funniest friends.  Which is why it was so refreshing to discover such warm, down-to-earth people when I ran into them at the Inauguration Weekend Peace Ball held at Arena Stage—from Production Coordinator Daresha Kyi to Writer Dwayne Kennedy to executive producers Chuck Sklar and Keri Smith Esguia, and even star W. Kamau Bell himself!  Bell was kind enough to give ‘DC on Heels’ an exclusive interview. 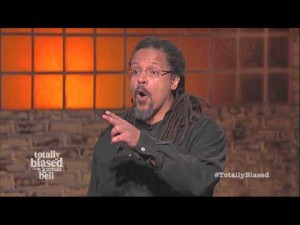 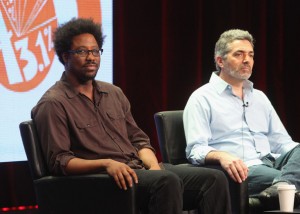 Abbie Elliott:  I was telling Daresha that I am kind of the Jehovah’s Witness of you.  It used to be Tide-To-Go pens, so it’s you now.  Anyway, I watched your coverage at the DNC (Democratic National Convention) and I am going to ask you a W. Kamau Bell kind of question…

Elliott:  …where did all of these white people come from?

Bell:  You know, white people have historically been interested in what black people are doing.  You can’t go nowhere where there’s black people and not find a couple of white people.  Africa proved that a long time ago.  I’m glad to see this many brown people here.  I’m an optimist.  I look for the brown.

Elliott:  Now, you were talking about that you weren’t here in 2009–why not?

Bell:  No.  Well, I knew it was a big deal, but I didn’t know it would ‘suck-all-of-the-black-people-out-of-the-city-that-I-lived-in’ kind of big deal.  So, I decided,” We aren’t doing this are we?” and everybody was gone.

Elliott:  You were the only black person in New York?

Bell:  No, I was actually in Oakland.  So, I was the only black person in Oakland, which is a big deal in Oakland.

Elliott:  That is a big deal.  So, there was nobody in Oakland?

Bell:  No, nothing got done that day.  So, this time, I wanted to come anyway, but now we have the show, which gives us a reason to come—which is even better.  And, in the interim, my wife gave birth to our mixed race baby.  So, I feel a very special connection with Barack. 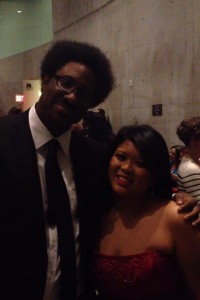 ‘Totally Biased with W. Kamau Bell’ is on FX on Thursday at 11 p.m.