Cupcakes For a Cause with Kerry Washington 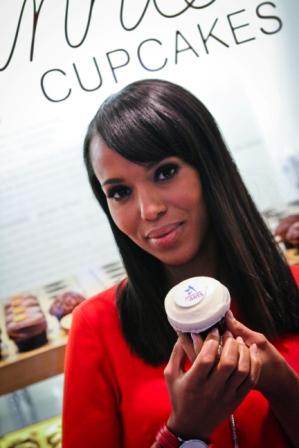 Award-winning actress and star of the upcoming ABC television series Scandal, Kerry Washington, was on hand to help serve cupcakes at Sprinkles Cupcakes to dedicated fans and customers in Washington DC, on October 29, to support Americans for the Arts. Americans for the Arts is a nonprofit organization, whose mission is to advance the arts in America, by giving everyone the opportunity to participate in different types of arts. They are able to reach their goals by the partnership they have with local, state, and national arts organizations. All of the proceeds from the sales of Sprinkles Cupcakes’ red velvet cupcakes from October 29 to November 6 went to Americans for the Arts. Visit their website to see how you can support or participate in one of their programs. 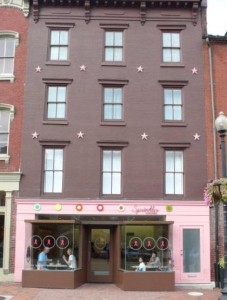 Sprinkles Cupcakes is new to DC, with the store opening this past March. They have 25 cupcake flavors, with their best sellers being red velvet, black and white and chocolate marshmallow. Sprinkles Cupcakes also sells coffee, hot tea, some sodas, bottled water, drinking chocolate (their version of hot chocolate), cupcake mixes and gift cards. They also have seasonal cupcakes to spice things up. For November, their seasonals are salty caramel, pumpkin, and orange cranberry. For December, finish out the year with a chocolate or vanilla peppermint or an eggnog spice cupcake. To promote different flavors of cupcakes, Sprinkles Cupcakes’ Facebook page asks fans to whisper the words of the day for a free cupcake if they are one of the first 50 people to whisper the words in the store. For example, some of the words might be “frosting fanatic,” “apple bobbing” or “off the menu.” Check their Facebook page to see how you can get your free cupcake! 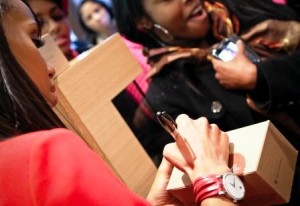 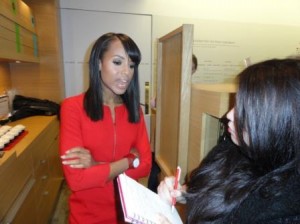 A DC blogger interviews Kerry Washington at the event

I had the opportunity to interview Kerry myself and get answers to some of my own questions. I had read on her website that if she could be any color, she would be burnt orange. I asked her why and she said it was because she loves fall and the color the leaves turn because she doesn’t see a lot of that in Los Angeles. I also asked how she she felt playing a blind woman in the Fantastic Four movies. She said by doing a movie with Ray Charles, it helped her prepare for that role. 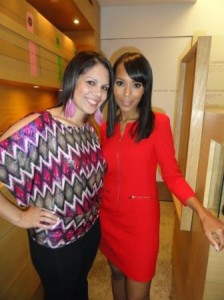 Kerry and I after my interview with her

ARTICLE BY: DC ON HEELS CORRESPONDENT 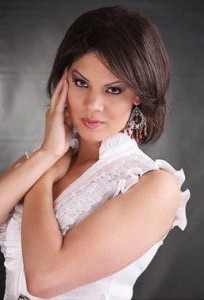