I love New York City. I started going there when I was 16 years old, flying into JFK Airport alone from Los Angeles in the summers to stay with my aunt and uncle with the purpose of exploring the Big Apple, and hopefully someday living there. 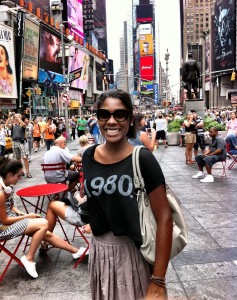 I'll take Manhattan: Markette stands comfortably in the middle of the chaos that is Times Square.

Well, at least one mission was accomplished. Although I have never lived in New York, I have logged a lot of miles on the streets in the city that never sleeps. When I moved to Washington after college, I continued my exploration of Manhattan with countless Chinatown Bus rides up to the city.

My friend Celina and I woke up way too early in the morning to snap this pic with Katie Couric just before she left 'Today' more than 5 years ago.

The Statue of Liberty? A-maze-ing. Broadway theater? Spectacular. The Metropolitan Museum of Art and the Guggenheim? You can never have too much time to explore them. 30 Rock? Yes, I have even stood outside of The Today Show and cheered for the cameras.

But when it comes to New York City’s parks — even its most famous park — I can’t believe I have never been! Sure, I’ve driven past Central Park, but I was always on my way to a dinner or a play or to meet friends. So this summer, when I heard of a new outdoor space that takes the city’s green space to new heights, I knew I had to go.

The place: High Line Park. Located along an old 19th Century elevated railroad track that runs through the Meatpacking District on Manhattan’s West Side, Highline Park is a jewel in the city that – until it fully reopened in June 2011 – used to be an eye sore in the sky.

The tracks were created and used in the late 1800s to allow cargo trains to deliver goods (like milk, meat and produce) directly into Manhattan’s distribution centers (i.e. – the Meatpacking District). Service ran on the line until 1980. 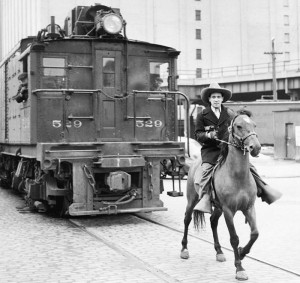 Back in the Day: a real-life cowboy guides a train on the tracks of what is now High Line Park.

After its heyday of freight deliveries, legend has it that the defunct railway became a haven for drug addicts and late night partiers who threw raves on the tracks (complete with live music bands) . This angered the neighbors who were trying to sleep (and live in peace), so a group of progressive community members began lobbying for change on the tracks (read full history here). 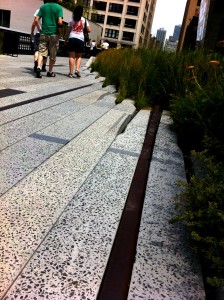 The tracks are still intact at High Line Park.

More than 20 years later, what exists now is a beautiful, sustainable outdoor space, and a perfect example of urban rejuvenation as it literally lifts visitors up off the gritty streets of Manhattan and allows them to appreciate a rare, mid-level view of a concrete jungle. 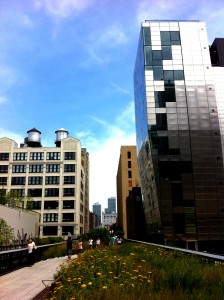 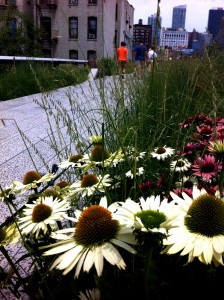 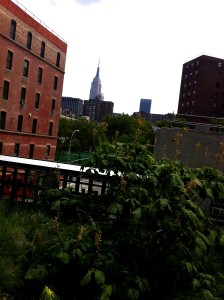 A view of the Empire State Building from Highline Park

The most spectacular views from the park include The Empire State Building (pictured above) and the New York City Skyline. But perhaps the most memorable sight on the elevated park is its sustainable design. 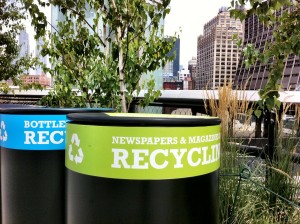 In the middle of a city built on true industrial grit, there are wildflowers, recycling bins and environmentally-friendly, audio-enhanced water fountains at every intersection. 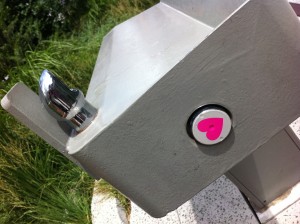 A High Line Park Ranger makes sure visitors keep it clean during their tour.

Costs: High Line Park is free to visitors, but people can support the park by becoming a member or donating to its foundation. 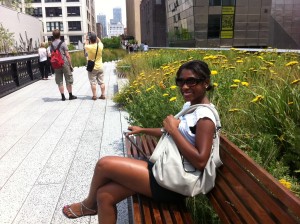 A Tree Grows in Manhattan: Markette takes in the view at High Line Park