Hurry  up and get your FREE tickets  to the advanced screening tonight. 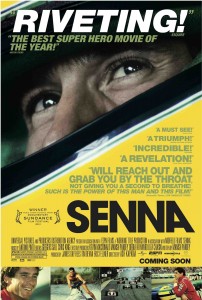 DC ON HEELS is  giving away 20 “admit two” tickets  to screen this incredible documentary  film this evening. The first twenty people to email us at press@dconheels.com will receive the tickets–it’s that simple.  We will reply back in an e-mail with your one “admit two” ticket for you to print and take with you to the theater. (Parking validation is offered at the cinema.)

EMAIL PRESS@DCONHEELS.COM for your two tickets!

As a reminder, screening tickets do not guarantee admittance.  Seating is first come, first serve.
In Theaters Friday, August 19

Spanning his years as a Formula One racing from 1984 to his untimely death a decade later, SENNA explores the life and work of the triple world champion, his physical and spiritual achievements on the track, his quest for perfection and the mythical status he has since attained.

Directed by Asif Kapadia (The Warrior, Far North), the film is written by Manish Pandey and produced by James Gay-rees (Exit Through The Giftshop), Tim Bevan and Eric Fellner (see credits below) with Kevin Macdonald (Touching The Void, The Last King of Scotland, State of Play, Eagle) and Manish Pandey serving as executive producers.

The film has been made with the full co-operation of the family of Ayrton Senna, who had given permission for this to be the first documentary feature film about his life; Formula One Management, who have provided footage not previously seen theatrically; and the Ayrton Senna Institute, the charitable foundation established after his death which provides educational opportunities to millions of deprived Brazilian children.

Oh and by the way—  Landmark E Street cinema rocks! It’s an eight-screen luxury movie theatre specializing in first-run independent and foreign language films, documentary features and classic revivals. In addition to high quality programming, the theatre is committed to state-of-the art film presentation. It features large screens with excellent, clear sightlines, stadium seating in the larger houses, Dolby Digital sound, amenities including upscale concessions and an espresso bar, and 3 hours of reduced rate parking within the building’s garage (with validation), Monday through Friday after 6pm and anytime on weekends.

Happy Screening. Tweet us after the movie and tell us what you thought!

Email press@dconheels.com for your tickets now =)