Kogiya Is a Gem in Local Korean BBQ

Located in the heart of what many locals call “Koreatown,” Kogiya Korean BBQ stands amidst a sea of promising Korean eateries in Annandale, Va.

Kogiya, located on Annandale Road, its unassuming storefront gives way to an industrial style interior, complete with a serious lack of heating. It wasn’t just me that felt the chill on a January afternoon. The majority of diners were huddled around their tables eating in full winter coats.

Kogiya boasts Korean BBQ, a style of Korean fare that is served family style with a grill at center stage. Surrounded by your chosen raw, occasionally marinated meat, a server will come armed with scissors and tongs to sear your meat tableside. The meat then is either eaten with rice or wrapped in lettuce leaves, but is always accompanied by banchan. Banchan are small side dishes typical in Korean fare and include pickled daikon radishes, kimchi and a variety of sesame soaked and chile infused vegetables. 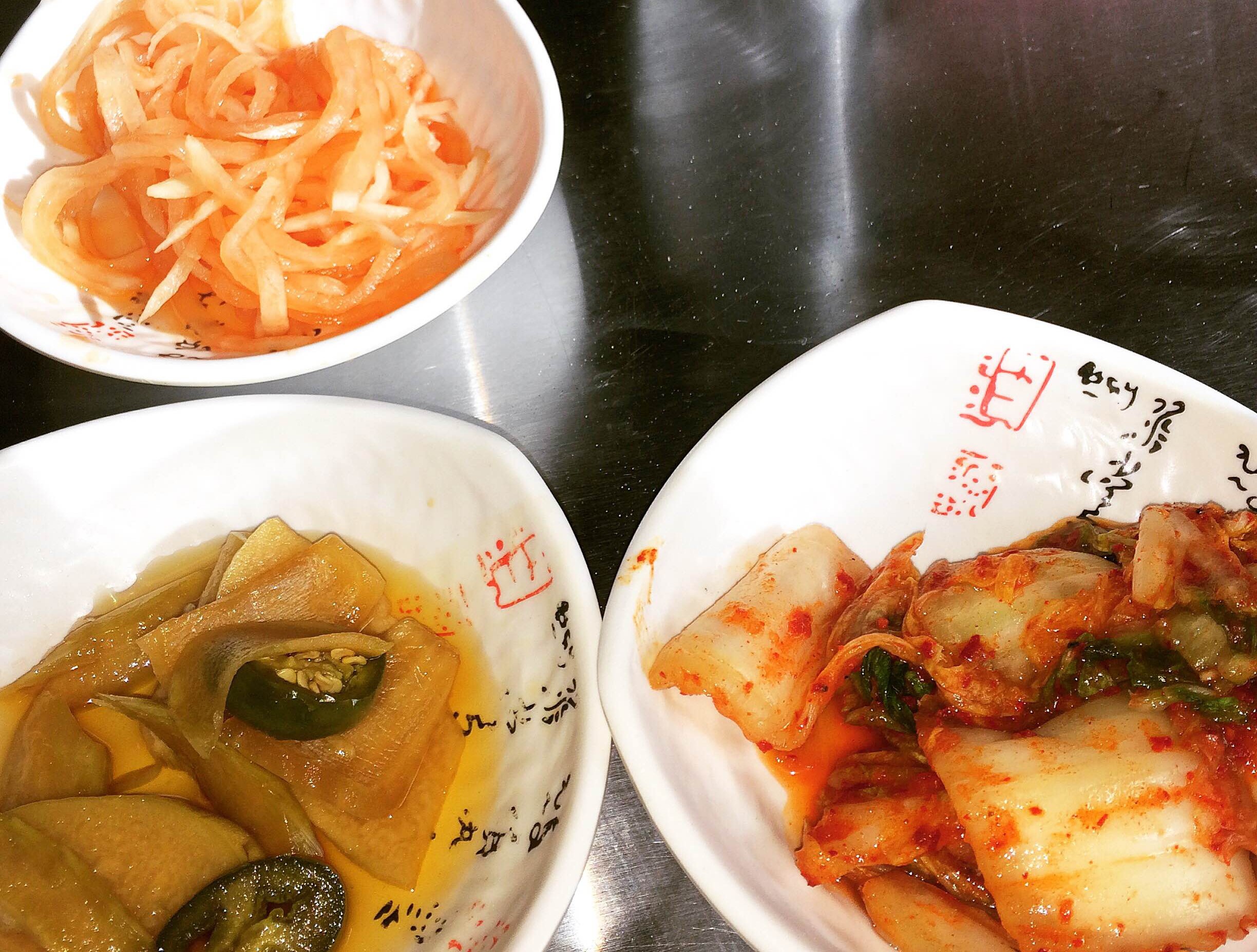 Our banchan included a few staples typical in Korean BBQ. Bitter pickled daikon radishes, fresh slices of jalapeno, bean sprouts, potato and onion salad — all great accompaniments to the meal, as well as a stalling tactic to offset the rather slow service. The kimchi was crunchy with sweet layers of cabbage hugging spicy red chile. The potato salad was slightly sweet and crunchy with undetermined pieces of vegetables in it. Aside from the vague flavor of Miracle Whip, it was satisfyingly benign when paired with the spices in the rest of the meal.

There were a variety of more unusual cuts of meat such as small and large intestines that I would have loved to sample, but the price tag on those cuts kept me on a more predicable path. We ordered two types of meat for our grill, the pork belly and the bulgogi, marinated, sliced rib eye. The unmarinated pork belly was seared to a caramelized perfection. Each chunk of thick pork was made even more succulent when piled high with savory fermented bean paste and bathed in a sesame dipping sauce. The rice, in fact, served as a vessel to the various sauces, each more exciting than the next and ranging from a peanut base with a breeze of orange blossom to a more predictable, but equally satisfying, soy based sauce. 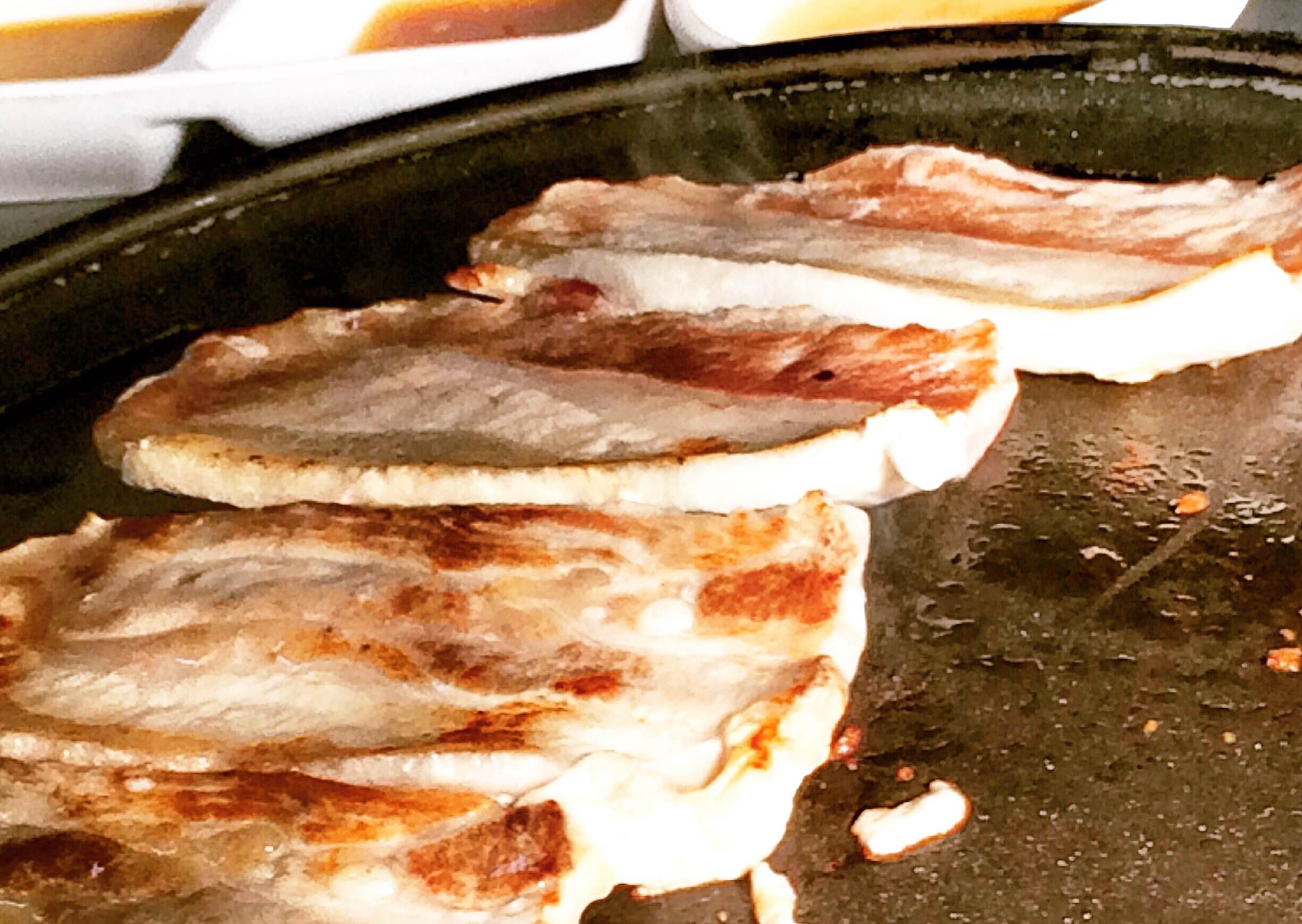 Pork belly cooking on the grill in the center of the table. (Photo: Diana Veseth-Nelson/DC on Heels)

The bulgogi came next and, to our disappointment, was cloyingly sweet. The pork belly was universally preferred of the two, but the bulgogi left me wondering if the spicy version on the menu would have better rounded out the dessert-like quality of the meat.

The red bean paste soup was a simmering pot of rich heaven. The soup was convincingly spicy. Soft cubes of tofu, slivers of jalapeno, thick with fermented beans all swimming in velvety red broth. A dish, although unpresumptuous, was pleasing to both the eyes as well as the palate. This soup was delectable, and considering the frigid temperature inside, its added heat was very welcome. 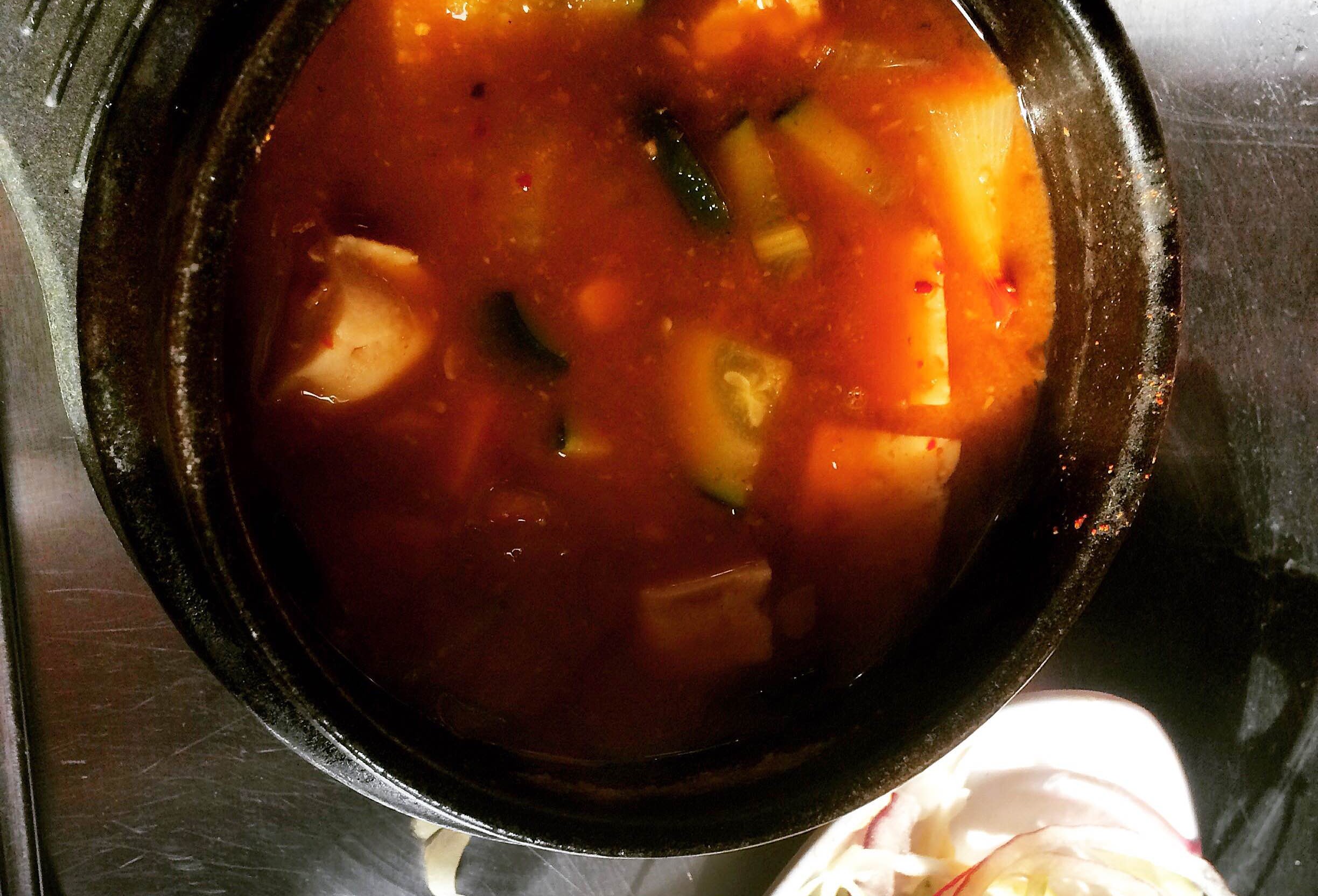 A quick bus ride on the Annandale Skyline City-Pentagon Line to Annandale will get you as close to Korean food as you can get without a passport. With a lot of competing restaurants boasting the best kimchi on this side of the globe, it’s hard to weed your way through the traps to find the gems — and Kogiya was worth the search.

Diana Veseth-Nelson is a self-described food fanatic. Unrelenting in her pursuit of fabulous food, her current favorites include roasted guinea pig from a local Salvadorean crockpot and truffled popcorn — although she cautions against pairing them together.
More posts by the Author »